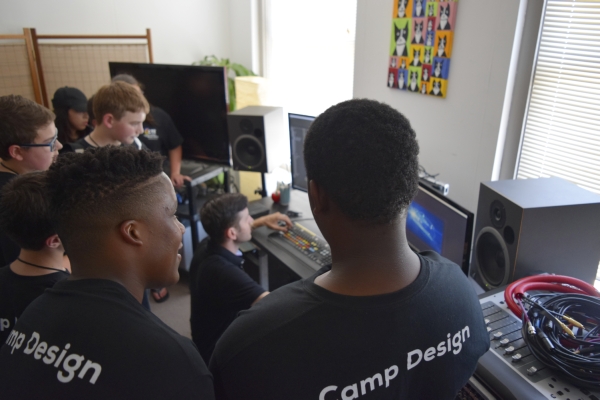 Students in Camp Design watch as Jerod Jacobs, owner and creative director of Six Foot Kitten, demonstrates adding visuals and sound to an animated project. Jacobs was one of several real-world design and communications professionals students learned from during the week. Rebecca Rider/Salisbury Post

SALISBURY — In a few short months, South Rowan High School will launch an academy training students to work in communications. But last week, rising eighth graders and freshman got a sneak peek.

“Camp Design” introduced a handful of students to the basics of the field. When the academy ramps up in fall, they’ll be able to specialize in game design, web design, broadcasting or multimedia. And it’s open to every student in the county.

The camp was a hit.

Their digital creations can be used to start a portfolio after graduation, Thompson said. And students who choose to attend the academy will receive a certification.

“This is something that businesses recognize as a statement of knowledge,” he said.

The communications academy will function as one of South Rowan’s Career and Technical Education programs, but students won’t be missing out on regular learning. Thompson said the classes tie into core curriculum, and many of them will function as electives.

But for now, prospective students had to settle for interviews and panel discussions with local communications experts. Students asked questions of local media members during a panel, and toured the studio at Six Foot Kitten, a local creative consultant.

Students enjoyed the week and learning how to use software. It also gave them a chance to feel out a possible career. Jocelyn Villa said she was thinking about studying communications, and hoped that the camp would help her decide. She still hasn’t made up her mind, she said, but she’d enjoyed learning about the field.

Eventually, each district high school will have a specialized academy, allowing students to zero in on one area of interest, Thompson said.

“This is something to benefit us all,” he said.

Internship shapes the future for next generation of scientists

KANNAPOLIS — In the world of academic research, the saying goes, “publish or perish.” Through their participation in the Plant Pathways... read more