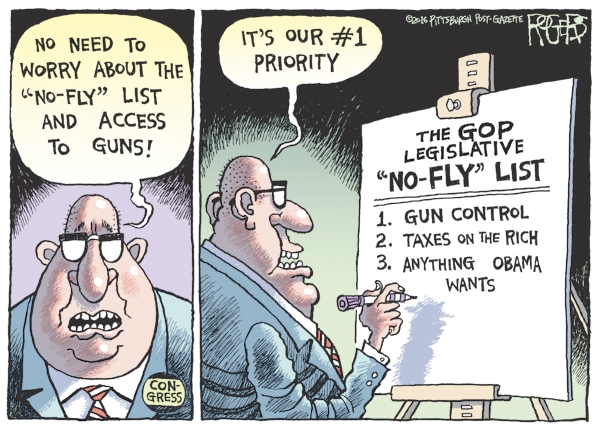 By Shira Goodman and Phil Goldsmith

Aurora, Sandy Hook, San Bernardino, Orlando. The list is mind-boggling. Different locations, different shooters, different victims. But they share a common feature — a very specific type of gun, a semiautomatic rifle — a lethal weapon that can quickly unleash 75 to 100 rounds of ammunition.

These are efficient killing machines. It doesn’t take much time to buy them. Just go to the store, pass a simple background check, plop down your money and then ready, aim, fire.

These efficient killing machines — the weapons of choice for mass shooters, terrorists and for criminals targeting law enforcement officers — are available off the shelf in a matter of minutes.

It makes no sense.

But it hasn’t always been this way.

For 10 years, from 1994 through 2004, the United States banned the sale, manufacture or possession of semiautomatic assault weapons. Although there is evidence that, during the ban, use of these weapons and high-capacity magazines in crime decreased, there were also loopholes that enabled manufacturers to make certain modifications and continue producing this type of weapon. When the ban expired in 2004, Congress, concerned more for its members’ political lives than the lives of the American people, didn’t try to improve the law. It simply let it die.

Although it is difficult to know how many assault-style rifles are in circulation today, the available data suggest that production and sales soared after 2004 — much to the delight of gun manufacturers, which profit handsomely from these weapons. …

While Congress dithers, some of our schools, movie theaters, bars and workplaces have become shooting galleries.

Why do we continue to allow these guns to be sold to civilians? They are not used for self-defense. You certainly can’t tuck them in your trousers or pocketbook. It hardly seems sporting to allow them to be used in hunting with so many more appropriate types of arms to use.

And there is no constitutional right to own them.

Supreme Court Justice Antonin Scalia, writing for the majority in the 2008 Heller decision, made that clear. The Second Amendment, he wrote, “is not unlimited. … (Nothing) in our opinion should be taken to cast doubt on long-standing prohibitions on the possession of firearms. … (We) also recognize another important limitation on the right to keep and carry arms. … The sorts of weapons protected were those ‘in common use at the time.’”

… Let’s enact a law that deals not so much with what weapons look like as what they can do. …The longer we allow these weapons to be on the market, the easier we make it for hate-filled, rage-filled, troubled individuals to buy these efficient killing machines.

A ban on assault weapons and high-capacity magazines is not a cure-all to eradicate all violence or stop all shootings, but it will make it much harder for the next killer to take down so many victims in such a short time.

Shira Goodman is executive director of CeasefirePA, an anti-gun violence organization. Phil Goldsmith is a board member and former head of CeasefirePA.