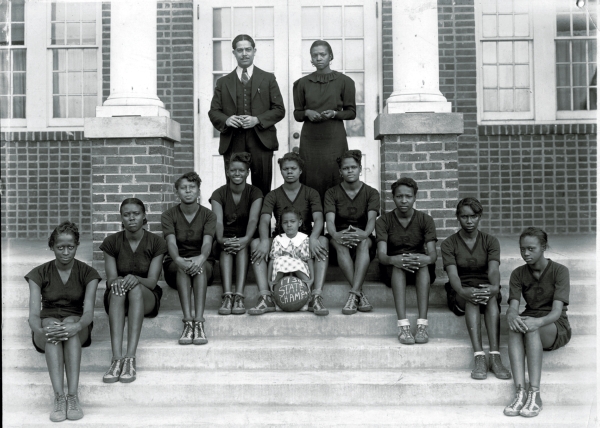 This is a team photo of the 1934 North Carolina State Champion women's basketball team from J.C. Price High School in Salisbury during the days of segregation. Standing behind the team are the coaches, E.T. Tabors and Grace Teamer. The little girl in the center is team mascot Doris Pharr. The players, from left to right, are name not available, Margaret Shipp, Aileen Anderson, Elizabeth "Libby" Duncan, Ann Sherrill, Ruth Miller, Louise Pharr, Evelyn Shipp and Annie Bell Pharr. They are sitting on the steps of the school, which still stands on East Bank Street. The Price National Alumni Association meets this weekend in Salisbury. Submitted photo

SALISBURY — Virginia Pharr Wilson says it started with a telephone call to her from Joe Duncan. She was a school administrator in Michigan at the time, and Duncan was retiring as an educator.

Duncan told Wilson that several J.C. Price High School graduates had been calling him, trying to get their high school transcripts and having no luck.

Many issues were discussed, but maybe the most important recommendation — offered by Wilson and approved — was formation of the Joseph Charles Price High School National Alumni Association, which would include the establishment of regions and chapters throughout the United States.

The emphasis was on the word “national,” because Price alumni were, as you might expect, scattered across the country.

The group is meeting this weekend in Salisbury and marking the 30th anniversary of its formation.

Besides the overriding achievement of keeping the memories of Price High alive, the alumni association also accomplished the West Bank Street school’s inclusion on the National Register of Historic Places.

As usual, this weekend’s annual gathering will include a Friday night fish fry at Miller Recreation Center next to the 1932 school, a Saturday morning business meeting and a Saturday night dance, with plenty of time to socialize and tour Salisbury in between.

Eleanor Qadirah of Salisbury is the current national president, while Wilson, who eventually moved back to Salisbury, is the alumni association’s longtime historian.

The Friday night fish fry will start at 6 p.m. in front of Miller Recreation Center, though there will be seating inside in the air-conditioned building. A deejay will be playing music from the 1940s on up.

Saturday morning will include a prayer breakfast, with the Rev. Tim Bates as speaker, followed by a general membership meeting. Saturday night will include a reception and dance.

The band Divided by Four will be performing for the dance.

Those attending the weekend festivities can pick up their registration packets at the former Holiday Inn on Friday. Call Qadirah at 704-636-2811 for more information.

This year, the Class of 1966 will be celebrating its 50th anniversary. Qadirah says Price alumni will be coming from as far away as California.

Duncan reviewed what he called “some issues in need of answers” — 10, to be exact — and he divided those attending a morning business session into 10 groups, giving them until noon to come back with recommendations.

The various groups staked out locations throughout the school auditorium, including spots on stage and in the balcony.

The entire gathering reconvened at 1:15 p.m., and after some drawings for door prizes, the groups made their reports and recommendations.

Among the things approved were the creation and incorporation of the national alumni association, plans to have a reunion for all classes every summer, $20 membership dues, election of a historian, the publishing of a yearly newsletter, fundraisers to raise scholarship money and getting national historical recognition for Price High.

And there is much history associated with Price High, which is one of two surviving Rosenwald schools in Rowan County, along with the R.A. Clement School in Cleveland.

The Rosenwald rural school building program, named for successful businessman Julius Rosenwald, was an effort to improve the quality of public education for African Americans in the South.

In 1917 he set up the Julius Rosenwald Fund, a Chicago-based philanthropic foundation, and in 1920 the Rosenwald Fund established an independent office for the school building program in Nashville, Tenn.

By 1928, one in every five rural schools for black students in the South was a Rosenwald school, and these schools housed one third of the region’s rural black students and teachers.

Price High’s last day as a public high school was June 4, 1969, and the following fall, its students merged with white students of Boyden High, which became today’s Salisbury High School.

Qadirah often will tell anybody who listens about those preservation needs.

Price served as both a junior high and high school. It actually got its start as a school in 1923 in a building that later housed Monroe Street Elementary School. Principals over the years were L.H. Hall, O.C. Hall, Dr. S.O. Jones, George W. Miller and Alexander Monroe.

The school had many important graduates and its teams had many successes on the athletic fields, including a 1940 football team that was undefeated, untied and unscored on, while scoring 298 points of its own.

Other Price High football teams had perfect seasons and won state championships, and sometimes those teams had to travel out of state to find good competition or play college teams.

Some of the school’s faculty members were legendary among the students.

At its closing ceremony in 1969, certificates for 25 years or more of service to the school went to S.W. Lancaster, Abna A. Lancaster, Mrs. N.J. Nash and William L. Miller.

As Price’s final farewell, students of the Class of 1969 wrote this:

“The Class of 1969 feel that we could do nothing less than accept the challenge set by former students of Price, and we pledge ourselves to make our imprints in the annals of history, by continuing the Price tradition of undaunted leadership and service. May we always remember that Price is ‘priceless.'”