Byron York: Prepare for the not-quite-worst 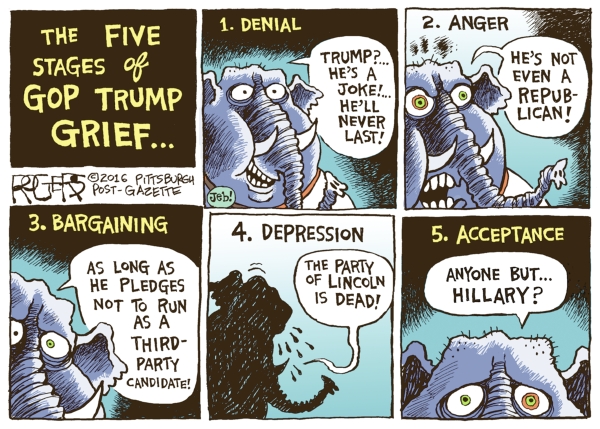 The latest national polls show Donald Trump in dire shape. In the RealClearPolitics average, Trump has dropped below 40 percent — 39.1 percent, to be precise — while Mitt Romney, in the entire losing 2012 campaign, never fell below 43 percent. In a nation roughly evenly divided, the thinking goes, even an unpopular candidate should be able to muster 40 percent support, and yet Trump is falling short.

At this point four years ago, Romney trailed Barack Obama by 2.2 percentage points nationally, according to the RealClearPolitics average. Trump is 5.8 points behind Hillary Clinton. The gap has led to predictions of catastrophe in November. “The Republican Party’s Coming Trumpian Disaster,” read the headline of a recent George Will column.

But the presidency is won by winning states, and therefore the condition of the race in key states tells more about the campaign than any national poll.

“This isn’t a national vote contest where you can be on cable news every day and dominate national coverage,” Mitch Stewart, battleground states director for Obama in 2012, said recently. “This is literally going state-by-state and coming up with a plan in each.”

In some key states Trump is trailing Clinton not by staggering, historically disastrous margins, but by margins that look remarkably like the Obama-Romney race in 2012.

Look at the polls in Florida, Virginia, Pennsylvania and Ohio, four states Trump will likely need to win (or at least win three) if he is to capture the White House.

Some of the most recent polling in those states has been done by the Democratic firm PPP, which has done fairly reliable work in the past.

Florida: In the most recent poll from PPP, Trump leads Clinton by a single point, 45 percent to 44 percent. In the RealClearPolitics average of polls, Clinton leads Trump by 1.6 percentage points.

In June 2012, the RealClearPolitics average had Obama with a miniscule 0.2 percentage point lead in Florida. On Election Day, Obama won by just under 1 point. The bottom line is that Trump appears to be roughly even with Clinton in Florida, much the way Romney was roughly even at the same time in 2012 before losing by a narrow margin.

Virginia: The newest poll, taken by PPP in the second week of June, has Clinton ahead of Trump by 3 points, 48 percent to 45 percent. At the same time in 2012, the average had Obama up by 3 points, and Obama went on to win by 3.9 points. So today looks pretty similar to back then.

Pennsylvania: A PPP poll from the first week in June has Trump and Clinton tied at 44 percent.

That’s much better than Romney’s position in Pennsylvania in 2012. In June of that year, the RealClearPolitics average had Obama ahead of Romney by 8 points, and Obama went on to win by 5.4 points.

So Trump today appears significantly stronger in Pennsylvania than Romney was at the same point in the 2012 race.

Ohio: In the average, Clinton leads Trump by 1.4 points. At the same time in 2012, Obama led Romney by 1.8 points. That’s pretty close to today. Obama went on to win Ohio by 3 points.

The bottom line is that the Clinton-Trump numbers in critically important states are more in line with the Obama-Romney race than they are with a doomsday blowout suggested by the national poll numbers. And that suggests that Trump could be headed for a loss that looks, not like a party-ending calamity, but an ordinary Republican defeat. Ted Cruz or Marco Rubio or Jeb Bush might have lost in much the same way.

The Electoral College numbers are what they are; Democrats have a real, long-term advantage in states that by themselves approach a winning total of 270. That could be more important than any Trump controversy, or even all of them put together.