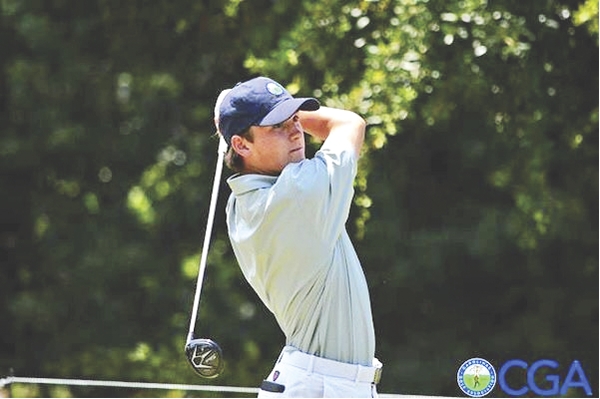 Carolinas Golf Association photo ... Salisbury’s Michael Childress tees off during play at Wilson Country Club on Wednesday, during the NC Junior Boys Championship. Childress is a rising junior at Cannon School in Concord.

WILSON — Michael Childress and Nick Lyerly won two matches apiece on Wednesday in the North Carolina Junior Boys Championship.
Childress, a Salisbury resident who is a rising junior at Cannon School, and Lyerly, a rising senior at East Rowan, won their opening matches at Wilson Country Club as the field was trimmed from 64 golfers to 16 in yesterday’s play.
The round of 16 will be contested this morning, while the quarterfinals will be played this afternoon.
Seeded third after qualifying with a 67, Childress had a relatively easy time of it. He eliminated Chapel Hill’s Ethan Lukes, 7 and 6, in the round of 64. Lukes was the No. 62 seed.
“I kind of just went with the same game plan as Tuesday,” Childress said. “I feel like that I’ve been giving myself chances for a while and things are finally starting to click to where I’m taking some of the opportunities that I have and really, just making putts. That’s what it comes down to in match play and I feel like I’ve done that as well as I can.”
Childress had a long break between matches. Then he rolled to a 6 and 4 victory over Wake Forest’s Grayson Wotnosky, the No. 35 seed.
“I tried to stay in the same mindset where I’m just playing the golf course,” Childress said. “I just wanted to keep giving myself chances.”
Lyerly, a UNC Greensboro commit coming off a victory in the prestigious North Carolina Amateur, is seeded 45th after qualifying with a 75, but he knocked out two opponents with better seeds.
He won 6 and 5 in the morning round of 64 against Clemmons’ Brandon Einstein, the No. 20 seed. In the afternoon, Lyerly ousted Charlotte’s Ben Buber, 3 and 1. Buber was the No. 13 seed.
Also advancing to the round of 16 was Cary’s Jack Massei, the defending champion and the No. 1 seed.
Concord High’s Stephen Carroll dropped a close match in the morning round.
Childress takes on Cary’s Alex Huml, a rising sophomore at Green Hope High, in the round of 16. Huml is the No. 51 seed. That match will get under way at 8:48 a.m.
Lyerly’s 8:16 match will be interesting, as he will be battling fourth-seeded Avery Price, a rising senior at Gastonia Forestview. Price led Forestview to the 3A state championship recently, while Lyerly’s East Rowan team finished second.

Price, a Georgia Southern commit, shot a 69 in qualifying.
In the round of 64, Massei will be taking on Cannon School’s Tim Bunten, the No. 16 seed.
The semifinals and championship match will be played on Friday.
Childress and Lyerly, who lost in the quarterfinals in 2015 when this tournament was held at the Country Club of Salisbury, are on opposite sides of the bracket and would not meet unless they reach the championship match.