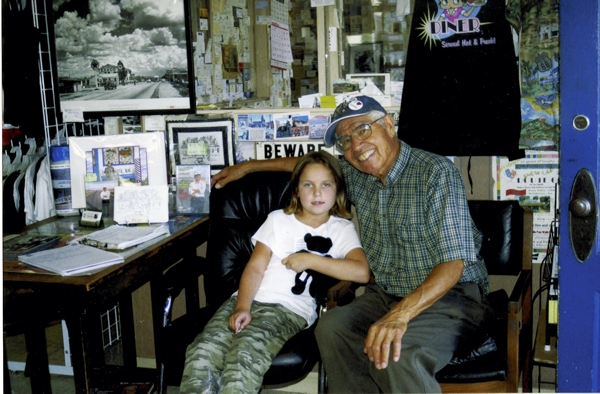 In 2007, Emily Stirewalt's granddaughter, Margaret O'Connor, met Angel Delgadillo, known as 'The Angel of Route 66,'at his shop in Seligman, Ariz. Submitted photo

Recalling Seligman, Ariz., and meeting ‘The Mayor of the Mother Road’ Emily Stirewalt of Salisbury sorts through some photographs of her 2007 trip out west, which included a stop along the historic Route 66. Mark Wineka/Salisbury Post

SALISBURY — As Emily Stirewalt has followed David Freeze’s daily dispatches from his bicycle trek along Route 66, she couldn’t help but remember Angel Delgadillo and his barber shop in Seligman, Ariz.

In fact, it looks as though the intrepid Freeze is pedaling through this same section of Arizona that Emily and her granddaughter, Margaret O’Connor, visited in August 2007 during their two-week tour of national parks.

Margaret, now a rising high school senior in Alexandria, Va., was 8 years old then. On a day toward the end of the trip, having just visited the Grand Canyon, their tour bus took a side trip off Interstate 40 to pay a visit to Seligman.

There, Emily and Margaret met Delgadillo, who has been called “The Mayor of the Mother Road,” “The Guardian Angel of Route 66” and “the Angel of Route 66.” In 1987, he led the founding of the Historic Route 66 Association, was elected its president and is credited with much of the preservation that followed along the historic highway.

“He was so friendly,” Stirewalt says. Delgadillo and Margaret, who was the young darling of the bus tour, became buddies quickly, she adds.

As  you’ve heard from Freeze, Route 66 extended from Chicago to Santa Monica, Calif., and there is much nostalgia associated with the highway. Families moving to California in the 1930s and 1940s followed Route 66 west, and many families traveled the highway on their vacations in the 1950s and 1960s.

Route 66 happened to pass through Seligman, Delgadillo’s hometown. Delgadillo’s  close ties to the highway can’t be denied. He attended American Barber College in Pasadena, Calif., which was on the route.

His barbering apprenticeship took place in Williams, Ariz., also on Route 66. And in 1950, Delgadillo opened up his first barber shop on Route 66 in Seligman, where his father had barbered and operated a pool hall.

Delgadillo and his wife, Vilma, had four children, and with his livelihood threatened, the barber looked for ways to bring back the traffic that was rerouted onto I-40.

He worked for years toward tapping into the nostalgia about the road and making it an historic highway. The Historic Route 66 Association’s headquarters was based out of the Delgadillos’ barber shop and pool hall and so was the first Route 66 gift shop.

Arizona ended up preserving 159 miles of Route 66, and that’s the longest uninterrupted stretch of the old highway in the country.

Stirewalt asked Delgadillo to sign a book she had purchased about Route 66 that was authored by Tim Steil, with photography by Jim Luning. On Aug. 22, 2007, Delgadillo autographed the book on the page with his picture.

Delgadillo apparently has been interviewed about Route 66 more than 1,000 times, leading to his being quoted or featured in hundreds of newspapers and magazine articles. He also has been seen in documentaries about the route, and the story of the town of Radiator Springs, in the Pixar movie “Cars,” grew from Delgadillo and his hometown of Seligman.

Stirewalt said she learned long ago that it’s often wise to buy a book about places she has visited to supplement her personal notes and photographs. That’s why she bought the book on Route 66, and scanning through it recently, she marked a few pages she thinks Freeze would find interesting along they way.

They include the Big Texan Restaurant, where if you can eat a 72-ounce steak in an hour, you don’t have to pay.

Other places were the Odeon Theater in Tucumcari, N.M.; the National Atomic Museum at the Kirtland Air Force Base and the El Rancho Hotel in Gallup, N.M. “I hope he gets there,” Stirewalt said.

For now, Stirewalt and other Post readers are concerned about the heat Freeze is facing as he heads east through the Arizona desert.

Maybe Freeze will get to cool off at a little barbershop/gift store in Seligman.

Mark O’Connor always has been a musical risk taker, so this new chapter in his life, this homecoming of sorts,... read more