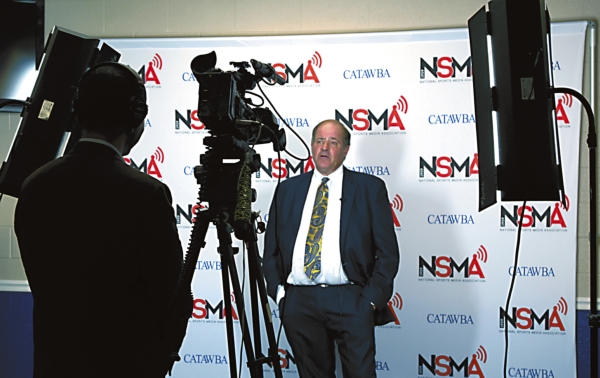 SALISBURY — It seems everyone has a story about Chris Berman, the longtime ESPN sportscaster who combines an over-the-top personality with ginsu-sharp wit and an encyclopedic knowledge of sports.

This one begins in the summer of 1980 when Berman — an apple-cheeked, 25-year old history major out of Brown University — found himself in an on-air predicament.

“You have to remember, back then we didn’t have video of most of the games,” he recalled Monday night at Goodman Gymnasium, shortly before he was inducted into the National Sports Media Association Hall of Fame. “And I was on at three in the morning. So it was Seattle 5, Kansas City 2, for 30 seconds. You had to do something to make that come to life. So, I came up with Julio-won’t-you-let-me-take-you-on-a-sea-Cruz.”

The nickname stuck — as did Frank-Tananna-Daiquiri, John-Mayberry-RFD and Bert “Be Home” Blyleven — launching a career that quickly turned Berman into a fan favorite and ultimately a sports industry legend.

“People seemed to like it,” he said. “It was just something that worked. But if you ever did this, and you were trying to be funny, it wouldn’t work. It was an accident, an accident that worked.”

It’s always impressed Rick Reilly, the 11-time national Sportswriter of the Year for Sports Illustrated and a current ESPN semi-regular. “You know, there’s so much going on when you’re doing TV,” he said. “And the things he comes up with in the middle of all that madness, it’s uncanny. It’s stuff I wish I could have written — and he just comes up with it out of nowhere. He’s one of the greatest characters we’ve ever had.”

What a long, strange trip it’s been for Berman — a six-time national Sportscaster of the Year who’s career has touched every square on the board. A Connecticut-born Yankee, he grew up idolizing the likes of Willie Mays and Joe Namath, then had the opportunity to meet both in a professional capacity.

“Who gets to do that?” he wondered. “I remember when I first met Joe, mid-80s when he was doing Monday Night Football. We were at the Orange Bowl and he came up to me and said, ‘Smile, Chris Berman. I feel like I’ve known you my whole life.’ I answered, ‘No Joe. I’ve literally known you my whole life.’ Then I told him about sitting in the upper deck at Shea Stadium as a kid. If he played 80 games there, I was on hand for 73 of them.”

Those early seeds have provided a lifetime harvest for Berman, a veteran of 34 Super Bowls who hosts ESPN’s Sunday NFL Countdown. “I think it all comes from his father,” said Seth Markman, the network’s senior coordinating producer of NFL studio shows. “It really started at those Jet games at Shea Stadium with his father and brother. He loves sports. It’s his true passion — and he genuinely loves football.”

Before being whisked off to the bright lights waiting in Catawba’s media room, Berman offered his thoughts on a few recently departed sports figures:

*Muhammad Ali — “I didn’t meet him until the late 1990s, which was a long time ago. He couldn’t really speak, but he heard everything you said. He was a communicator, even when he couldn’t communicate.”

*Gordie Howe — “He finished his career in Hartford, and the Whalers had a very funny fight song called ‘Brass Bonanza.’ One night I was down by the ice and there he was, 52-years old, mouthing along to this song. I’ll never forget that.”

*Joe Garagiola — “Every day was a happy day for Joe. He could spin phrases. He talked baseball in a lingo that was understandable — half what the players in the dugout must be saying and half what the rest of us wanted to know. He was sunshine every day.”

It’s been eight years since Norby Williamson — former vice president of production for the Worldwide Leader — called Berman “The face of ESPN.” And nearly 37 years since he was hired by the network during its infancy. His contract will expire after the approaching NFL season, prompting an outpouring of online commentary, not all of it warm-and-fuzzy.

“None of it came from me,” insisted Berman, who doesn’t frequent the internet and has no email address. “People will say what they want to say. We’re working on something. Football will be the same this year, but after that some things may change.”

So will his network friends and peers. Listen to Bill Fairweather, a producer for NFL Primetime from 1994-2003: “If that’s the case, that he’s leaving, he’s going to be the most valuable free agent in all of sports. If Howard Stern can get $100 million, what can Chris Berman get?”

Fairweather went on to discuss how Berman did it all without a script, citing something about “saving the trees.”

“He knows the history of sports and combines that with passion, with love for the game,” he said. “The camera always found Chris. Chris didn’t find the camera. And you know the rest.”

We do, but we don’t know how the Chris Berman saga will end. At age 61 — and on the back nine of an illustrious, magic carpet ride — he seemingly has seen it all, yet hasn’t seen enough.

Fair enough. Just remember to count the NSMA Hall of Fame as a proud teammate.