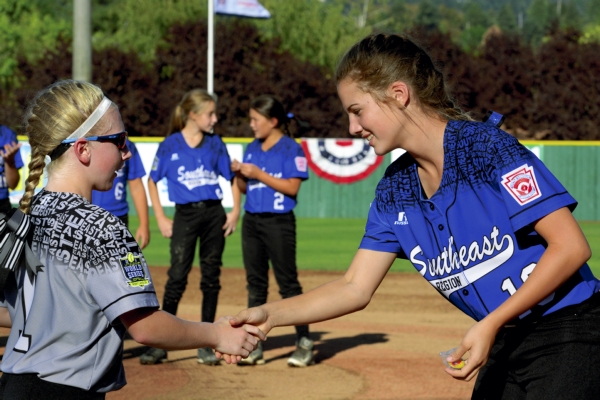 SALISBURY — Dan Wales, president of Rowan Little League, admits that hosting three regional softball tournaments at once is going to be the biggest challenge of his life.
These are eight-state affairs, major events, so Wales is like a pinch-hitter being sent to the plate with the bases loaded in the bottom of the ninth. There’s plenty of pressure to get it right the first time.
Still, Wales sees things falling into place a bit more every day.
Maybe a local restaurant commits to provide a meal for the nearly 300 umpires, coaches and players who will be descending on Salisbury Community Park on Hurley School Road. Maybe a check for $100 arrives in the mail. Or maybe someone calls to donate a tent, a cooler or a grill.
“Two months ago, I was a nervous wreck,” Wales said. “But it’s coming.”
There are a million details involved in this operation. Lining up the meals to be served at the park is only the most daunting task. Trainers, fire & rescue and security personnel have been scheduled. There are 600 T-shirts ready for sale. Scorekeepers and P.A. announcers have been recruited.
The softball tournaments are an undertaking that has involved mayor Karen Alexander, Rowan County Commission chairman Greg Edds, the Parks and Recreation folks, the city staff, and, well, too many people to mention them all.
“It’s going well,” Wales said. “But there are just so many little things.”
While there are many little things, what’s coming is expected to be big.
Wales estimates an impact of $500,000 on the local economy and boldly declares it the “single biggest tourism event in Rowan County history.”
The three hotels involved in housing visiting players, parents and umpires — Courtyard Marriott, Hampton Inn and Comfort Suites — will be among the beneficiaries.
The dates for the tournaments are July 21-24, with the welcoming banquet at West End Plaza scheduled for 7:15 p.m. on Thursday, July 21. North Carolina barbecue will be served. Teams will be introduced.
Games will be played over the next three days.
In a perfect world, those three days of competition will crown three Southeast Regional champions. In a less than perfect world, one that includes rain, the tournament conceivably could stretch as far as July 28.
It can’t go past that, as Little League softball World Series events in Oregon, Delaware and Washington state will rolling by Aug. 1.
Wales, needless to say, will be on his knees the third week of July, praying for sunshine.
“One tough thing is we don’t know the exact schedule yet because we don’t know precisely how many teams are coming, and Florida won’t be deciding its regional representatives until right before our tournament starts,” Wales said. “Some of this is going to be last minute. That can’t be helped.”
Teams are coming from Florida, Georgia, South Carolina, Tennessee, Virginia, West Virginia and Alabama to join North Carolina in the tournament. So there’s a maximum of 24 teams involved. But it’s also possible every state won’t be represented in all three age divisions.
The regional divisions that will be contested here are Junior League (ages 13-14), Senior League (ages 13-16) and Big League (ages 14-18).
Wales said Rowan Little League’s teams, whose boundaries include Rowan as well as part of Iredell County, are stout again.
“We’re good, and I expect us to have four state champions,” Wales said. “We’ve got a couple of teams good enough that they could go to the World Series.”
Three fields at Salisbury Community Park will be in use constantly, with a fourth field on stand-by in case extra innings knock things out of kilter or weather delays are encountered. Wales is relying on District 2 administrator Vince Scanlon and assistant district administrator Mike Hirschman to handle things like schedule adjustments.
“Hirschman is a genius at scheduling,” Wales said.
The opportunity for Rowan County and the city of Salisbury to host an event of this magnitude is owed mostly to the 2015 World Series triumph in Oregon by the Rowan Little League girls playing in the 11-12 age division. Most of those girls were 11, and nine are back for another run. Unfortunately, their age division isn’t playing in Salisbury. The 11-12 Southeast Regional will be returning to Warner Robins, Ga.
“Winning always helps, and what those girls did in the World Series opened doors for us and it led to this opportunity to host three regionals,” Wales said. “Little League believes we have the community support and the facility to pull this off, and we have a more central location for our region than Fort Myers, Fla., which has hosted for years.”
Funds have been spent on improvement to the fields at Salisbury Community Park. There are new backstops and new windscreens.
The director of softball development for Little League, Sara Thompson, will be coming to Salisbury to observe and make sure Little League guidelines and standards are maintained.
The tournament itself will take in some money from admission charges, concession-stand sales and merchandise, but Wales just hopes Rowan Little League can break even. Rowan Little League originally budgeted $60,000 for the tournaments, but the final total is going to approach $70,000.
“This is not meant to be a profit-maker or a debt-maker for Rowan Little League,” Wales said. “This is meant to be a point of pride for Rowan County and Salisbury.”
If all goes according to plan, Rowan Little League could be a regional host for years to come.
“It’s ours to keep or it’s ours to lose,” Wales said.