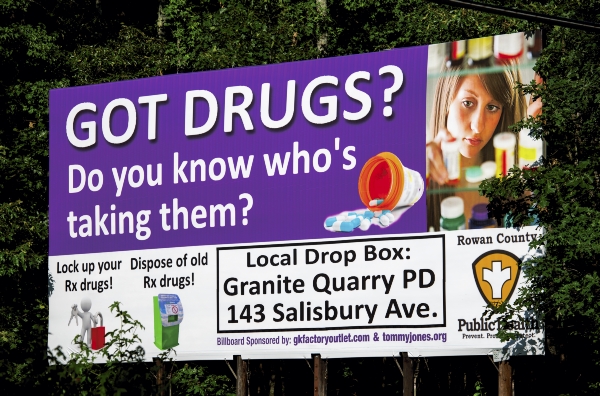 A billboard advertising the new drop boxes for prescription drugs is displayed along US-52 in Granite Quarry. Allison Lee Isley/Salisbury Post

Down the hatch: Prescription drug disposal available at multiple sites

SALISBURY — Don’t know what to do with old medications? The Rowan County Health Department and the Center for Prevention Services has teamed up with community partners and local municipalities to provide safe disposal of expired or unneeded prescription drugs.

In May, the department began installing “take-back boxes” in various locations around the county. Anyone can come in and drop medication in the secure green-and-white disposal. Amy Smith, health education specialist and wellness coordinator with the Health Department, said that the boxes are emptied once a week by the Rowan County Sheriff’s Office, and the contents incinerated.

“They come in, drop it off — no questions asked,” Smith said.

The move is the result of a statewide push for awareness of death from accidental overdose. In 2013, the N.C. Department of Health and Human Services reported that death from medication poisoning was the second-leading cause of accidental death in the state. The report noted that Rowan County was one of 32 that, at 15 to 25 deaths per 100,000 residents, had a consistent and significantly higher rate of death than the state average.

Nancy Litton, program manager at the Center for Prevention Services, said that medications should be disposed of as soon as they’ve expired or are no longer needed. But many don’t know how to properly dispose of prescriptions, or decide to keep the medicine around in case it’s needed in the future.

“Sometimes folks hold onto their medication, and sometimes it ends up where it shouldn’t be,” she said.

That could be into the hands of curious kids, teenagers or relatives who may be struggling with addiction. Pain medications and opioids, especially, Smith said, can pave the way for other addictions.

But it’s a multi-faceted problem. Sometimes, people end up with bottles and bottles of pills after a relative dies. Smith recalled seeing a woman dumping a large Rubbermaid container of medication into a prescription drop box after her terminally ill relative passed.

But many aren’t sure what to do. Flushing or throwing away medication can cause groundwater contamination, and until recently, the only take-back box in the county was inside the Salisbury Police Department.

With nine locations around the county and cooperation from local pharmacies, Litton and Smith hope to educate the community – and maybe move “upstream” of the addiction and accidental overdose problem in the area.

Mike Jones, owner of Granite Knitwear, donated a billboard the T-shirt company owns to give the boxes some publicity. Jones said he lost a son to a heroin overdose back in 1997.

These days, young people go to their parents or grandparents’ medicine cabinets for a high.

“But it’s the same thing. It’s an opioid, whether it’s heroin or oxycontin,” he said.

He said he hopes that the message — which reads “Got Drugs?” along with a warning and lists nearby drop-off locations — will “get stuck in people’s memories.”

“Hopefully it’ll do a good thing,” he said.

Litton said that addiction and overdose aren’t problems that can be arrested away – they have to be headed off before they begin.

“There really are a number of edges to this problem,” Litton said, “The drop-boxes are a part of our solution.”

Planning for the project began in August, and the secured boxes were installed in March, after the Health Department received $27,000 in funding from N.C. Healthy Communities. Litton said she and Smith are also working with community partners including Novant Health Rowan, Cardinal Innovations, the Rowan County Sheriff’s Office, local pharmacies and Communities in Schools, among others, to educate Rowan County residents about the dangers prescription medication can pose.

“It’s a cradle-to-grave concern, and there are solutions all along that path,” Litton said.

The take-back boxes are installed and ready to go in nine locations that cover seven Rowan County municipalities.

“Every day now in Rowan County is a take back-day for medication,” Amy said.