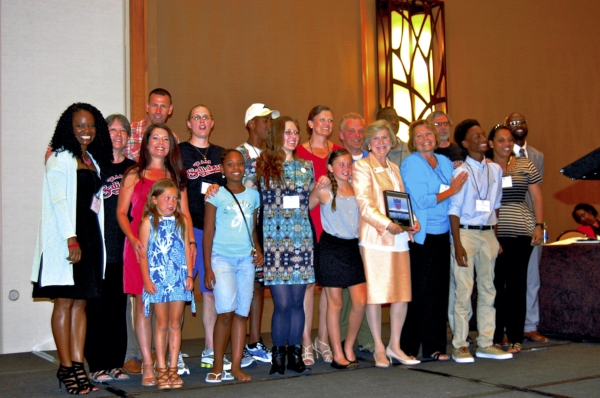 All America 2: Salisbury's delegation goes up on stage to accept their All-America City finalist award in Denver, Colo. After giving their final presentation to jurors in Denver, Colo., Salisbury was not able to bring home the award. Amanda Raymond/Salisbury Post

DENVER — As city after city was called up to accept their 2016 All-America City Awards, the delegation from Salisbury anxiously waited to see if Salisbury would be called. It wasn’t until the awards for just being a finalist were distributed that Salisbury heard its name.

Salisbury is not an All-America City for this year.

A delegation from Salisbury, including adults and children, traveled to Denver, Colo., to compete against 19 other cities for the National Civic League’s 2016 All-America City Award competition.

Only 10 cities walked away with the award.

“I’m proud of everything we did,” Linda McElroy, communications director for Salisbury, said.

This year’s focus was on community programs and activities that help children live healthy lives and succeed in school and life.

Salisbury submitted three programs in its application: Fit for Motion, a program that fights childhood obesity; the Knox Middle School co-principal program, under the direction of Dr. Mike Waiksnis and Dr. Latoya Dixon; and the Norvell Theater, which provides youth programs with Piedmont Players Theater.

Program organizers and members, including a dozen children, accompanied city representatives to give a final presentation in front of jurors in Denver, competing against 19 other cities from around the country. The Mini Funk Factory Marching Band also came along for the presentation.

Salisbury decided to perform a skit with props, elaborate costumes and humor to present information about the programs and showcase the city’s talent. Norvell Theater actors Ali Khatib and Courtney Williams, along with Kent Bernhardt, led the presentation.

The city previously won the award in 1961.

Nick Aceves, parks and recreation department director, said even though Salisbury did not win, they learned a lot from other cities.

“I think the community benefits regardless,” he said.

He said he thought the team’s presentation was well received by the audience.

“There were 10 other communities who did a better job and just hats off to them,” he said.

McElroy said she thought the application and presentation for the award were “top-notch.”

She also said the community support for the delegation was more than she could have imagined.

“Our community came together and supported us in ways that I never thought possible,” she said.

According to the National Civic League, the award can help both winners and finalists bring in new businesses and residents into their cities and towns. They may also see an increase in tourism, grants and bond ratings, as well as a renewed sense of community pride.

Shawn Henderson Jr., who talked about the Knox co-principal program during the presentation, said he was not upset that Salisbury did not win because the experience was worth it.

“It was a great experience to see other communities and see what they have,” he said.

McElroy said it was too soon to tell whether Salisbury would apply for another All-America City Award, but she is looking forward to bringing back ideas learned from other communities to help Salisbury.

“We will continue to do good things in Salisbury,” McElroy said. “We don’t need a national award to do that.”