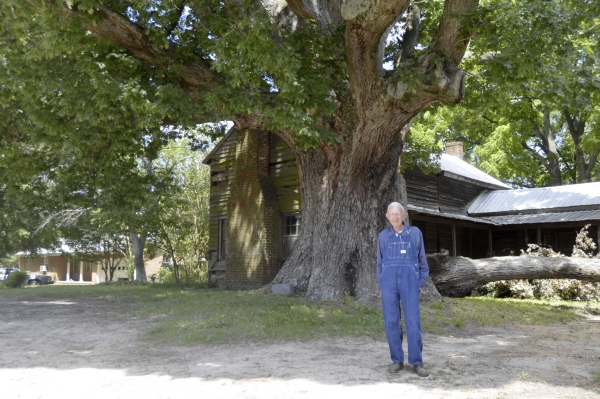 William "Wild Bill" Corriher stands in front of the tree that has been on his family's property for centuries. The oak tree is estimated to be between 500 and 700 years old. The family home was where his grandfather, father and he were raised. Parts of the home were built in 1856. A tree limb fell, bringing the tree out of balance and it has to be cut down. Shavonne Walker/Salisbury Post

The old oak tree must go, but not the memories

CHINA GROVE — Upon driving the dirt road that leads to William “Wild Bill” Corriher’s home, it’s not hard to notice the massive oak tree that sits in front of his childhood home. The tree, which has been estimated to be about between 500 to 700 years old, maybe nearing the end.

The limbs are infringing upon the home, located off N.C. 152, and in order to save the home, the tree must go. A limb fell a few weeks ago and Corriher realized just how close it came to destroying the home where his grandfather, father and he grew up.

The tree has been cut back a couple of times before, including in 2000, when Corriher had the tree trimmed after it split. Impending turbulent weather gave Corriher cause for concern, so he hired a company to cut the limbs back.

In 2000, the tree’s height was estimated to be 75 to 80 feet, about 22 feet in circumference, and 81.55 feet was the crown spread or the distance the branches spread away from the trunk.

The tree has endured three lightning strikes, one of which set the tree on fire. Corriher said he poured water onto the tree. The old burned areas can still be seen inside the tree after a hole was made when the limb fell a few weeks ago.

Bill and his other eight siblings weren’t ever allowed to climb, swing on or even pull limbs from the tree.

“It was sacred. It was a family treasure,” Bill said.

The tree does have good branches for a swing, Bill noted, but neither he or his siblings ever tried to put up a swing, even after his father’s death in 1981.

“When mother and daddy said no, that was gospel,” Bill said.

He recalled when Superior Court Judge Anna Mills Wagoner was running for office, the family held a supper for her underneath the tree. The family has hosted many suppers under the old oak tree. On Bill’s 80th birthday, all of the Corrihers gathered under the tree for a celebration.

Bill’s daughter, Rose, said the tree has been like a family member.

“We had family cookouts under the shade of the tree. We strung green beans and shucked corn under it’s cooling shade in the hot summer,” she said.

As long as Bill Corriher’s father, William, and his grandfather were alive, there was always that tree in the front yard. The family home that sits to the left of Wild Bill and his wife, Pauline’s home, was in part built in 1856. It says so on a brick on the outside of the chimney.

Bill’s older sister still baked homemade bread every day in the wood burning stove inside the home before her death.

Three generations of Corrihers were born and raised in that house. A midwife delivered Bill in 1929 in that house at the cost of $2. His childhood bed is still in the house as are the woodburning stove and a pie safe in the kitchen. On a shelf sits a bottle of castor oil, which Bill’s mother gave him a time or two as a child, some spices and a vintage tin bottle of Deodorized Liquid Wrench.

Bill insists in the coming weeks the tree will be cut down. It maybe going, but the memories are staying.