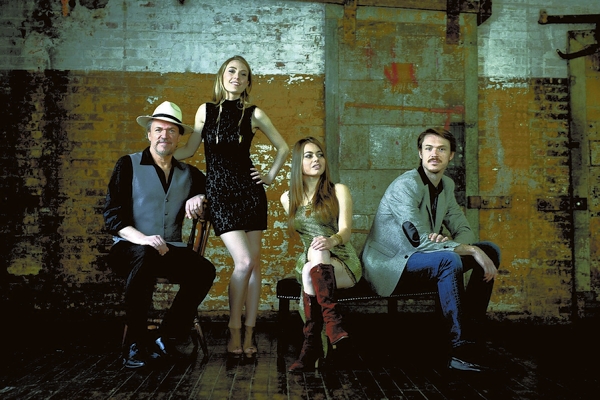 Mark O’Connor always has been a musical risk taker, so this new chapter in his life, this homecoming of sorts, probably makes sense.

“It’s kind of par for the course for me,” says O’Connor, who will be performing with his wife, Maggie, at the Rowan Public Library Thursday evening. “I like musical risk-taking. I suppose it has made me the kind of artist I’m known for.”

O’Connor, a legend among fiddle players, has developed a new family band, the O’Connor Band, getting ready to tour across the country this summer. He also has moved over the past month from his longtime base in New York to a home on Lake Wylie near Charlotte.

The move has allowed O’Connor to make an immediate connection with the N.C. Bluegrass Association, which is sponsoring his appearance in Salisbury Thursday evening.

Bigger than that, Vivian Hopkins of the Bluegrass Association is partnering with O’Connor to schedule “O’Connor Method Teacher Training” July 9-10. In addition, the Mark O’Connor Strings Camp in the spring of 2017 will kick-start the association’s “Carolina Jam Camp” next summer.

It takes more than a few words to describe the kind of artist O’Connor has been. As a kid, he was a phenom, a child prodigy. At age 13, he was the youngest person to win the Grand Master Fiddler Championship, and after 40 years, he’s still the youngest. He also went on to win national titles in fiddle, bluegrass guitar and mandolin.

Years in Nashville followed, along with six Country Music Association Musician of the Year awards. In the 1970s, he played with a well-known acoustic string band, the David Grisman Quintet, and in the 1980s, he was a member of the rock fusion band The Dregs.

O’Connor started a couple of bands of his own, including the New Nashville Cats, and he became a much sought-after session musician, playing on more than 500 albums with performers such as Dolly Parton, Paul Simon, James Taylor, Randy Travis and The Judds.

He has produced 45 feature albums, with mostly his own compositions, and has sold more than two million CDs. Ken Burns has often turned to O’Connor for sound tracks to go with his film documentaries.

But much of O’Connor’s career also has been devoted to defining and helping to create American classical music. Toward that end, he has composed nine concertos and two symphonies. His “Fiddle Concerto,” for example, his first full-length orchestral score, is the most performed modern violin concerto composed in the past 50 years.

O’Connor has played with the top classical musicians of his day and with major metropolitan symphonies, including the London Philharmonic Orchestra.

O’Connor also has been conducting string camps for 20 years, and that also has led, since 2009, to his development of the O’Connor Method for teaching all levels of violin.

According to his website: “It takes an American Classical approach to modern violin playing, offering a technical foundation using songs from the diverse range of traditional American string playing.”

O’Connor is presently completing book five of his method — the most advanced chapter. He thought it was important for someone to establish an American class of string playing, and now tens of thousands of students are learning the O’Connor Method around the world.

American fiddle players used to learn from their grandpas on back porches, as the tradition was passed on generation to generation. It’s a simplistic way of describing it, but close. That’s not really happening any longer, O’Connor fears.

“We’ve got to get it into our educational system,” O’Connor says. “Families have to have access to our best American string playing and education.

“It’s going to create an American school of string playing all the way to the conservatory.”

O’Connor hopes he is part of establishing an American classical music that does not ignore the country’s bluegrass, jazz, African-American spiritual, ragtime, Western swing — all manner of “amazing American styles that have been completely ignored by academia.”

Meanwhile, O’Connor also can’t hide his excitement for being part of this new family band, the core of which includes him, wife Maggie, son Forrest and Forrest’s fiancé, Kate Lee.

The O’Connor Band will be releasing its first CD, “Coming Home,” Aug. 5.

“The singing and songwriting and playing are just wonderful,” O’Connor says. “To be able to introduce them to my previous fans and together build new ones is really exciting to me.”

O’Connor describes their music as combinations of progressive bluegrass, country and folk.

“The fact I’m doing an album with my family is something I never really planned on,” O’Connor says. “It feels so good to play with family and play on stage.”

Forrest O’Connor is a Harvard graduate who studied music composition as a sideline curriculum to his business concentration. Taking up the mandolin, Forrest started singing and playing whenever he could. “All of a sudden, he gets really good at it and says, ‘I think I want to do this, and I’m moving to Nashville,’” his father recalls.

After the family played together last year on Mark O’Connor’s popular “Appalachian Christmas” music tour — something they will do again this holiday season — “we all looked at each other on the tour and said, ‘You know, it might be pretty cool to play music beyond December.’”

So it’s another risk. But it’s one Mark O’Connor can’t wait to take.

Mark and Maggie O’Connor will perform at Rowan Public Library’s Stanback Room from 7-8:45 p.m. Thursday. The event is free and presented in conjunction with the N.C. Bluegrass Association. Contact Mark Wineka at 704-797-4263, or mark.wineka@salisburypost.com.