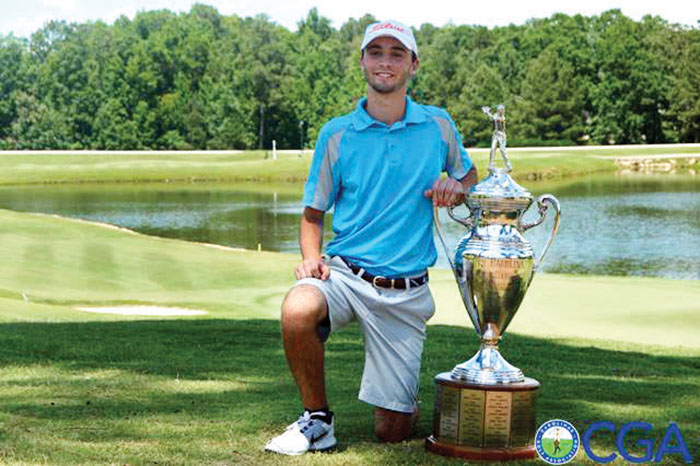 East Rowan’s Nick Lyerly poses with his trophy after becoming the youngest winner of the North Carolina Amateur.

Nick Lyerly, a rising senior at East Rowan, has won a lot of tournaments, but he’s certain Sunday’s victory in the North Carolina Amateur was the shining moment of his promising golf career.
Lyerly shot 70-71-68-71 — 280 to finish 8-under at Governors Club in Chapel Hill. He won by one stroke.
“By far the best win I’ve ever had,” Lyerly said. “This wasn’t just a big tournament. This was a men’s tournament with great adult players (including Scott Harvey) and great college players.”
Lyerly, who has committed to UNC Greensboro, turned 17 five months ago and is the youngest winner in the tournament’s history. He’s two months younger than 2014 champion Joshua Martin, the previous youngest winner.
“This was an eye-opener for a lot of people,” said Jay Hill, a teaching pro who began working with Lyerly in middle school. “This is huge for Nick and it’s huge for golf in Rowan County. He’s an incredible young man with a great work ethic. I’ve seen him practice in rainstorms and I’ve seen him practice when it was 30 degrees.”
Winning on Father’s Day made the event a little more special for Lyerly. His father, Roger, couldn’t be in Chapel Hill, but he was able to follow Nick’s progress online — hole by hole.
“He said it was the best Father’s Day ever,” Nick said. “I’m glad I could win it for him.”
Lyerly entered the 72-hole event with confidence, but it’s not like he was expected to do what he did.
“I knew it was going to be tough to win going in. After two rounds I was four shots back, but then I shot the 68 on the third day to get to 2-under, and after that, I knew I had a chance at it.”
He came out strong on Sunday with two quick birdies to get to 4-under for the tournament, and he stayed in front.
The competitor who closed within one stroke of Lyerly was playing two groups ahead of him. Jamestown’s Justin Tereshko shot a 5-under 67 that included an eagle on No. 13. Tereshko finished 7-under for the tournament.
Lyerly bogeyed 15 and 16, but he birdied 17 to move to 9-under. That gave him a two-shot cushion heading to the 18th tee.
He needed it.
“I hadn’t really felt any nerves at all until 18,” Lyerly said. “Then I felt a little bit.”
His drive was in the middle of the fairway, but his second shot on the par 4, 456-yard 18th was one of his shakiest of the tournament.
“I kind of hit a 6-iron down on the toe of the club,” Lyerly said. “I didn’t catch it solid. Fortunately, I got just enough of it to get it over the water.”
He made a safe chip, two-putted for bogey and claimed his one-shot victory.
Lyerly made 17 birdies in the tournament and he also made an eagle 2 on the par-4, 410-yard No. 6 hole in the second round.
Lyerly even made it home in time to watch Dustin Johnson win the U.S. Open.
“I was glad to see DJ win a major,” Lyerly said.
Lyerly got his name engraved on a massive trophy and earned an exemption into the 102nd Carolinas Amateur Championship hosted by the Country Club of Charleston on July 14-17.
Next on Lyerly’s schedule is the 49th North Carolina Junior Boys Championship, which begins at Wilson Country Club on Tuesday.
“The sky’s the limit for Nick,” Hill said. “He’s a nice kid, very humble, but he brings a very special focus to the golf course and he does what he needs to do. He knows his strengths and he knows his weaknessess. I followed his round online today, and I cried like a baby when he won.”