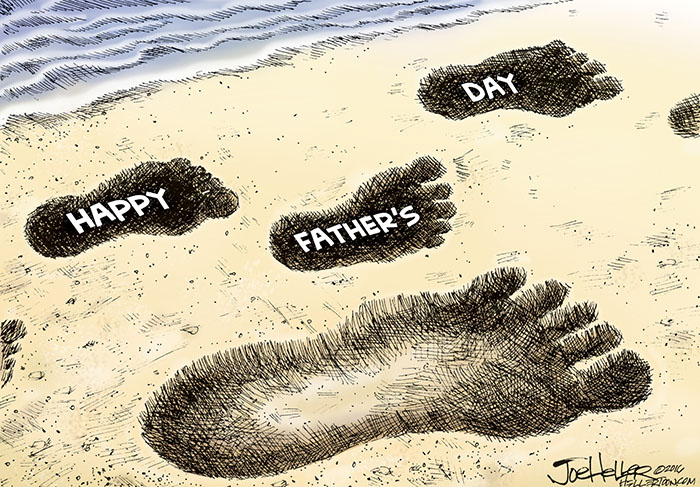 Fathers mean more to their children and society than fathers themselves realize.

This might help. It’s estimated that the federal government spends more than $99.8 million annually on child support enforcement, anti-poverty efforts and other programs to families that don’t have a dad in the house. The National Fatherhood Initiative’s 2008 report about absent fathers is called “The 100 Billion Dollar Man.”

It is impossible to calculate the emotional costs.

More than 24 million children, 1 in 3, are growing up without their biological fathers; factoring in stepfathers and adoptive fathers doesn’t move the needle much. Divorce and incarceration are two frequent reasons fathers are separated from  their children. The other major cause is single motherhood, with no father around to begin with. The portion of U.S. mothers who have never been married has risen from 4.3 percent in 1960 to 43.6 percent in 2010.

The grim statistics can be overwhelming — all the more reason today to honor the men who are there for their children. From the delivery room to Little League bleachers to high school graduations, weddings and beyond, they stand ready to cheer their children on — and, when necessary, to save them.

“Two instances come to mind where my father has had my back, literally,” Packard writes. “The first was on a backpacking trip on the Appalachian Trail, just the two of us, when I was 9 years old. We had just stepped onto the trail, maybe 30 yards in to the hike, when I was virtually jerked backwards off my feet. With a tendency to walk with my head down, I had completely missed the cottonmouth viper sitting in the middle of the trail. My father saw it in time to pull me back by my pack.

“The second was on a winter backpacking trip up Mount Rainier with the Boy Scouts. Curious about the drop-off adjacent to the trail, I wandered over to take a peek. Just as my lead foot broke through the cornice over a couple hundred foot drop, my dad once again grabbed me before I slipped over.”

Becoming a father is easy; being a father requires hard work. The situations are not always life-or-death, but keeping children on the right path takes vigilance and commitment. Thank you to the many men who lead the way. Happy Father’s Day.