Beyond the ambulance: 24 hours with Rowan EMS 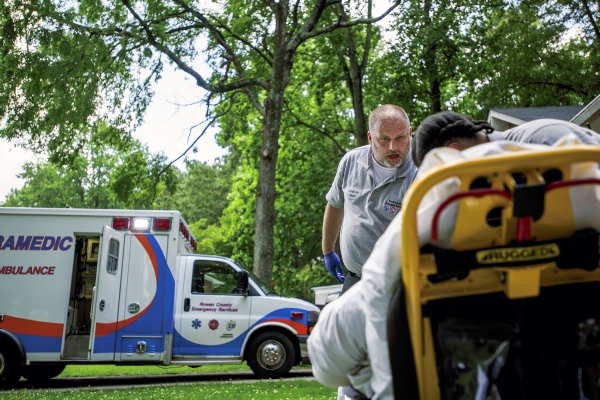 ALLISON LEE ISLEY/SALISBURY POST Paramedic Marcus Stodard, left, makes sure a patient is comfortable before transporting her to Novant Health Rowan Medical Center in Salisbury during his 24-hour shift on June 1. The patient was being transported for injuries related to a fall.

ROWAN — Renoda Burns and Marcus Stodard are master jugglers, multi-taskers, quick thinkers, educators and Rowan County paramedics. The pair together have more than 14 years’ experience responding to calls throughout the county, all within a 24-hour shift.

Burns and Stodard are two of nearly 87 paramedics and EMTs on staff with Rowan County Emergency Services, 57 of whom are full time. The responders are off for 48 hours and then return for another 24-hour shift for the week.

The 24-hour shifts have become problematic and Emergency Services officials have championed a change to 12 hours, which would align them with neighboring counties that have made the switch.

Rowan County EMS Division Chief Lennie Cooper said one of the reasons to change to a 12-hour shift is fatigue. The EMS Division participated in a sleep study conducted by the University of Pittsburgh that showed 74 percent of the personnel were working fatigued.

In high-volume systems like Rowan, where there is fatigue, the potential for mistakes is higher, Cooper said.

If medics had shorter shifts, it could mean they would sleep more and response times would improve, Cooper said.

“After exhaustion comes frustration. You’re tired but it’s nonstop. You just have to do what you have to do,” Burns said.

It’s also difficult to hire new employees, Cooper said. Rowan has lost employees to other agencies that have already implemented the changes.

“It’s a strain on the ones still here because some have left for positions that are at 12-hour stations,” Burns said.

Under current conditions, the busiest of EMS stations can expect to spend between 8.66 and 11.34 hours directly involved with patient care and documentation. This excludes drive time, restocking and cleaning the ambulance.

“This is a multi-year transition to 12-hour staffing, therefore we will have employees working both 12 and 24 work schedules until it is complete,” Cooper said.

The eight new positions will be added to existing staffing to allow EMS the liberty of assigning 12-hour personnel to three current EMS units and Rockwell when that project comes on line.

“I credit the county manager for appropriating the funds,” Cooper said.

No two days are alike when it comes to EMS response, and both Burns and Stodard agree some days are less hectic than others.

A Post reporter recently accompanied the two paramedics on a 24-hour shift. The first emergency call came in an hour after the shift started. Two items come out of the ambulance on every call — a “go bag” and a mobile data terminal that allows medics to complete reports anywhere.

Stodard grabbed his go bag  as he always does and raced to the patient’s front door. First responders were already there. The bag contains everything from bandages and latex gloves to CPR shields. He never leaves the ambulance without the go bag, he says, because the one time he doesn’t have it will be the time someone’s life depends on what’s in the bag.

The patient complained of chest pains and believed he was having a heart attack, but a heart monitor showed he was not. Stodard recommended the man go to the hospital for further testing. The patient requested to be taken to the Hefner VA Medical Center.

As Stodard reported his findings to the VA doctors, Burns made her way into the hallway to change the sheet and pillowcase on the stretcher and give it a wipe down with disinfectant, as the two do following all calls where a patient is actually transported.

Each ambulance responds to a specific tone when dispatched by 911, and by now Stodard and Burns know their tone.

“When the tones drop, I automatically am thinking, ‘What are the possibilities?'” Burns said. “When you get there, you start ruling things out.”

“We just have a lot of quick decisions to make,” Stodard said.

Stodard said he goes into a situation thinking about the worst that could happen. Co-workers say Stodard gets a little fired up and is excitable when it comes to responding to emergencies.

But, when it came to a collision at Brenner Avenue, Stodard jumped to the patient, a 78-year-old woman who’d broken her clavicle, and gingerly checked her vital signs and calmed her despite the pain she was in.

“It’s the worst time in their life,” Stodard said.

Burns and Stodard have a system — they rotate providing care for a patient while the other cleans, restocks the ambulance or drives.

“Dave, you’ve got to take better care of yourself,” Stodard told a diabetic patient who had not eaten three full meals that day and who experienced severe low blood sugar.

The patient was unconscious and his airway was blocked, causing a snoring sound. After an intravenous sugar solution, he slowly awakened.

“Do you have a Coke?” the medics asked the patient’s wife.

The patient was given a soda. He said he’d not eaten since breakfast and only had a Tootsie Roll since then. It was around 5 p.m. and his wife made him some soup. Stodard and Burns declared they weren’t leaving until the patient ate some soup, which he did.

The medical care was followed by a mini education session on what healthy foods the patient could eat.

Lunch and dinner sometimes don’t happen for the medics, who may respond to call after call. In some cases they may have just enough time to stop by a sandwich shop or fast food restaurant, but not have time to eat the food.

Some calls have a time window where the paramedics have to make a quick assessment, then take the patient to the hospital. A man on the side of N.C. 52 with no shirt and what appeared to be heat exhaustion and disorientation required more than just an IV.

Once the paramedics finish with patients and complete patient reports, there are a few spare moments to talk to co-workers.

Downtime is spent planning for the days medics aren’t working. In the case of Burns and fellow paramedic April Lashua, both are single mothers who clean the house, grocery shop, do laundry and schedule activities for their children when they are not on duty.

Stodard takes on shifts providing EMS coverage at sporting and other area events.

If there is time for it, the paramedics sleep.