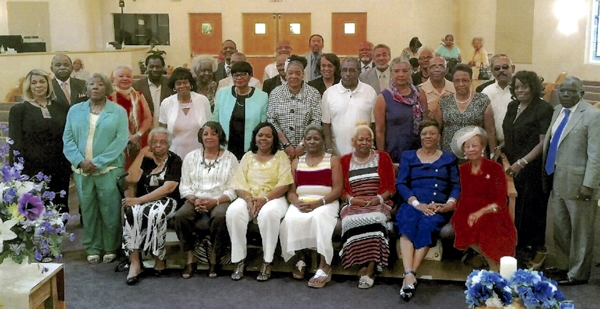 The Dunbar High School Class of 1966 celebrated its 50th class reunion. There were more than 30 alumni and one faculty member attending.

The Dunbar High School Class of 1966 celebrated its 50th class reunion June 3-5, 2016. There were more than 30 alumni members and one faculty member — Vietta Roberts — present for the event.

Piano students of Tina Brown of Rockwell presented a recital on Friday, June 3 in the fellowship hall of Organ Lutheran Church. The recital included an arrangement of Vivaldi’s Spring, American Folk Songs by Stephen Foster, Nimbus 2000 from “Harry Potter and the Sorcerer’s Stone” movie arranged by Carol Matz.

Mrs. Brown gave a presentation on the life of Ludwig Van Beethoven. She followed by playing familiar pieces written by Beethoven.

Recognition was given to Carys Roberson, Baleigh Trexler and Gage Trexler.  who participated in the National Piano Guild in April.

This piano year, the students performed in two piano recitals at Genesis Eldercare in Salisbury: a Christmas recital on December 20 and a Spring recital on March 13.

Composer statuettes were given to all performers for completing a music project.

‘Reading In the Park!’ coming up Saturday

Great Women and Men United presents “Reading In the Park!” on June 25 from noon to 3 p.m. at Cannon Park, 611 Park Ave. This event is all about the importance of reading. Great Women and Men United will be dressed as favorite children’s storybook characters and will be available at the park to read to the children. The children will also be served ice cream with toppings, given a small surprise and encouraged   to choose a book to take home. Bring a towel, blanket, or lawn chair. For more information, call Chariel Dye at 704-738-7077.

The Kneeling Gardeners met May 23 at Trinity United Methodist Church in Kannapolis for their monthly meeting. President Royce Thomason presided over the meeting. Chaplain Jan Query had  devotions titled “Waiting for Answers.”

Our guest speaker for the evening was Doug Vernon from the N. C. Research Campus. Doug is retired after 29 years from Northwest Cabarrus High School where he taught Horticulture/Agriculture there. He now works for N. C. State with Dr. Perkins and was hired to work in the lab at the research campus in the greenhouses. Needless to say after working with high school students and being outside and in the classroom he felt the need to again involve students in his teaching life. Doug was able to add a research program on behalf of N. C. State. This research is a program he implemented which would build bridges with the community and connect the kids with science. Some 54 students were selected to be a “Scientist for a Day.”  Students were selected based upon their interest in science. They were in a lab for 30 minutes with a researcher as they worked fully equipped with lab coats from the N. C. Research Campus. They were involved with such research as “taste buds” where they ate a miracle berry which changes your taste buds completely. They learned how to extract DNA from a strawberry and spit into a test tube to see if bacteria would grow, and what is required for a seed to germinate. Students were allowed to look through million dollar microscopes. He awaits the outcome to see if a student wants to be a scientist one day. Other focus in his work was speaking to all Kannapolis City Schools to see if they wanted to establish a garden. This is part of the Green Teacher Network. This does not replace what you are doing in school, just replaces what you are doing outside. This often helps students who struggle with good behavior, it engages all students and increases teacher satisfaction in their job. Jackson Park Elementary has six raised beds about 4 x 8 and they are in their second year. Woodrow Wilson has a raised bed on legs and a pallet garden. Fred L. Wilson has four beds, Shady brook had beds previously and is now back in business. Lowes built six raised beds for Forest Park. Kannapolis Intermediate has a large courtyard and their beds are on legs in that area. Kannapolis Middle has a school farm that is quite large where they have learned to grow vegetables to eat. Two schools have formed a pollinator garden. This is where plants are used that primarily attract pollinators. A. L. Brown has a unique situation and they are making ready for a culinary garden and a pollinator garden. This is just a part of what Doug does with the schools to get the students involved and see the results of their labor.

Refreshments were provided by Nancy Rutledge, Anita Parker, and Ann Rollins. Anyone interested in gardening is invited to attend. Our June meeting will be held on June 27. Our speaker will be Joey Tellegrin with Pike Nursery on butterflies.