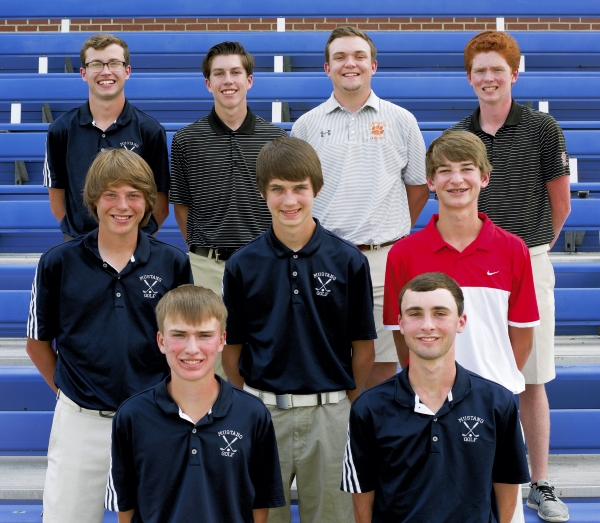 SALISBURY — This year’s All-Rowan County boys golf squad has a very familiar look to it.

Two former county golfers of the year, Logan Shuping (2013) and Nick Lyerly (2015), teammates at East Rowan, are once again front and center.

This season’s Rowan County Boys Golfer of the Year honor, as determined by the Salisbury Post sports staff, is shared by Shuping and Lyerly.

Shuping, a senior who signed with East Carolina, won the county tournament in April, finished second in the South Piedmont Conference and third in the Midwest 3A Regional.

Lyerly, a junior who has verbally committed to UNC Greensboro, won the SPC title and took second in the regionals, before finishing fifth in the state 3A event at Whispering Pines.

You couldn’t go wrong with either one. Both are great young men who should continue do very well in the future, on the course and in the classroom.

For Shuping, winning the county tournament at Warrior Golf Club on April 18 was definitely a goal, but the day didn’t exactly start well.

“It was my senior year and I really wanted to win it,” said Shuping. “I was determined to start strong and win the tournament, but I bogeyed two of my first three holes.

“But I finished strong and remember making a lot of putts that day,” continued Shuping. “I finished on No. 4 (par 5) and I had an eight-footer for birdie. I knew it was for a 67 instead of a 68, which could be the difference between winning  it or not. I had no idea how anyone else was doing.”

Shuping confidently sank the putt for the four-under par 67, good enough for a three-stroke win over South Rowan’s Parker Chavis. Lyerly was third with a 73.

“When that putt went in, it was one of my proudest moments in golf,” added Shuping, who also won the county event as a freshman.

Six days later, again at The Warrior, Lyerly led the way in the SPC Tournament with a one-under par 70. Chavis was again second with a 73 and Shuping shot a 74 for third place.

Lyerly was named SPC Player of the Year, as he won the cumulative scoring for the season by 16 strokes.

“It’s a nice accomplishment,” said Lyerly, of his co-player of the year in the county honor. “You always want to win it, but Logan beat me there in the tournament and he deserves it too.”

Shuping and Lyerly have been friends and teammates for a long time, and some people may think that they’re the same age. But Lyerly has one more year and can top the county again next year.

Both players have the same feeling about the way the season ended.

Leading after the first round of the two-day state 3A tournament at Whispering Pines, East Rowan stumbled during the second round and finished runner-up to Forestview.

“The last day at states and the last round of the year,” said Lyerly, sounding like it still hurts to think about it. “We didn’t play our best that second day and got beat. We all had great years but came up a little short of our ultimate goal. It was a disappointing ending, but overall, a great season.”

Shuping was in total agreement.

“Disappointment is a good word for it,” said Shuping. “We didn’t get the job done. No one on the team did their job that final round. It took a little while to get over it because the state championship was what we were looking for all season.”

Now, it’s on to summer tournaments, college this fall for Shuping and back to high school for Lyerly.

Not that they always have the same schedule, but the two will be in the North Carolina Amateur this weekend at The Governors’ Club in Chapel Hill.

Lyerly won the Horace Billings Rowan Amateur last July and plans to defend his title next month. “I’ve got a pretty busy summer, but I’m free that weekend, so it’s works out for me,” said Lyerly.

Last week, Lyerly competed in the North Carolina Open at Kannapolis’ Irish Creek. He finished 23rd out of 160 players. “I was pleased with that, but as always, it could have actually been better,” he said.

Shuping, who also played basketball at East for four years and baseball early in life, says, “right before middle school, it was pretty obvious what I needed to stick with — golf.”

And for the kid who started playing with his dad, Todd Shuping, at McCanless Golf Club at age 5 or 6, Logan will soon play a course that is on every golfer’s dream list.

The family is taking a California vacation this summer where they’ll spend a few days in San Francisco before playing a round at Pebble Beach Spyglass Hill.

“It’s a graduation gift,” said Logan. “My parents said that if I earned a college scholarship and did what I was supposed to do, that we would go. And we’re going.”

Shuping and Lyerly certainly had help as the Mustangs finished second in the state for Rowan County Coach of the Year, Rhett Teems.

Chavis, a junior, made the team from South Rowan, along with another junior, Andrew Hubbard.