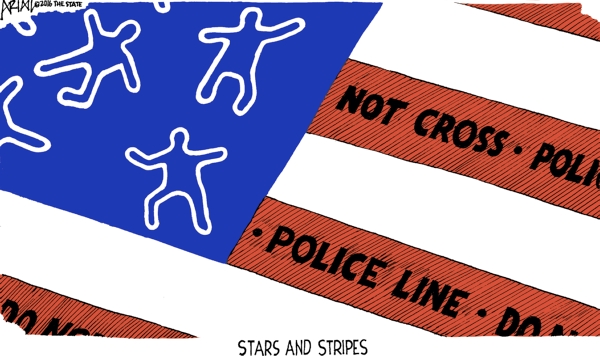 And do you really think that making more or changing the current laws would get the attention or cooperation of criminals or terrorists? I think not and common sense tells you that I am right.

If patrons of the night club in Orlando, or any where else that have had these terrible happenings, would have been armed, I think it is a safe bet that the casualties would have been much fewer.

Most good people, when it comes down to it, don’t want to be responsible for killing another person. Even if that person is undoubtedly a bad person. Also, most of the time the shock of being attacked is greater than your ability to pull a trigger. Multiple long-term studies have shown that owning a gun does not make a safer community.

I’m not really looking to debate here or even to insult your point of view because I would like to believe that you believe that you would have done something had you been there to defend those people. I also think it’s a totally different ballgame when it comes to semi-automatic and automatic weapons that can take multiple lives at one.

An AR-15 is not an assault rifle. Like a .22, you squeeze the trigger once, it fires exactly one round. Do not allow gun haters to frame the debate. Reject their premises. Demand facts.

Cal, did you really just write that the U.S. government should not allow any mosques to be built the U.S.? Check the First Amendment; we have freedom of religion in this country. Would you support the government saying no more Christian churches can be built?

What I find so interesting about the philosophy of those who say “we don’t need new gun laws because people can just get them illegally” is this: Every law is broken on a regular basis. Why have any laws? Why should it be illegal to force entry into someone else’s home? It happens all the time so, alas, why make that illegal?

Here’s why: if it’s illegal to own an assault weapon without a permit, then we can arrest anyone who is caught with one illegally. The criminal is arrested and put away and the gun is confiscated. What we have now is ease of access with no way at all to get a would-be terrorist off the street unless they specifically say, “I will shoot people.” That’s what’s crazy.

Also, with regard to this “war” that Cal wants, I’m guessing he is advocating for a war against our own citizens since those are the ones committing these slaughters. Does this remind anyone of the McCarthy era? I guess we’ll start identifying Muslims and put them all in prison or deport them. Is that how this will work?

The Paul L. Dunbar Group is still interested in acquiring the building for the same purposes.

Award the facility to the group that is trying to improve the educational conditions in the town of East Spencer. It seems that the day of “good gestures” are a thing of the past. 🙁

The building, built in the 1920s, would also need to be brought up to code,which could be an “expensive endeavor” if it contains asbestos or lead paint, he said. You may wish to contact DENR or some other government cleanup group and see if building does contain asbestos or lead paint. May be able to classify it as a brown field site and receive help in cleaning it up.

It is my understanding that the Dunbar group is willing to take on those responsibilities, and have a viable plan to achieve the goal, if the building is donated to them for the stated purposes.

A community hub or a charter school would be ideal, and I can’t think of a better way to honor the legacy of Mrs. Essie Mae Foxx.

Wrap around and charter school would be a great idea for the East Spencer community. Our youth really need the community support.

I really hate to see Dr. Dixon leave, but I do understand that when certain opportunities present themselves, you have to take advantage of them. Thank you, Dr. Dixon for your contributions to Knox Middle School. I can vouch for the transformation that has occurred within the past two years as a parent and coach and am looking forward to a continuation of that with Dr. Waiksnis, Mr. McNeil and the future deputy principal.

Dr. Dixon made a positive impact on our students at Knox. She will be missed dearly. She put fun and excitement with work. The kids looked to her and always spoke about how great of a person she was. I look forward to seeing what our interim principal adds to Knox Middle. He is s great mentor to our youth and has a priority to put our kids’ needs first. The partnership between him and Dr. Waiksnis should be very powerful.

… Spay/neuter alone isn’t going to solve this issue or it would have already been solved. Let’s get our heads out of the sand and start implementing life-saving alternatives which do not require a million dollar facility.

The county and shelter have been provided information on such policies and yet they can’t seem to get their act together to implement them. Wait, they say. Wait, wait, wait — while more innocent lives are killed at their hands.

Many many thanks to all the workers yesterday that made this possible for us to give our neighbors this water donated by Niagara. Neighbors ended up getting lots more water as we just filled up vehicles that came back and workers were also taken care of.

We are tired but will not go away as we ask Duke Energy to provide for everyone within a half-mile boundary of any coal ash impoundment. …

We would love for Duke to meet with us, the neighbors, the ones who are living this nightmare each and everyday to work together for the betterment of everyone, not just Duke. We all live in this neighborhood and have questions and just want answers.

Now they need to go bust all these heroin houses in Salisbury that used to be crack houses. Looks like heroin is the drug of choice these days among addicts.

Rate increases for these services to keep up with “market rates.” Too bad they don’t increase the jobs opportunity to market rates. A bunch of minimum-wage restaurant jobs. Poor leadership … for a long time.

This begs the question, why would Club for Growth finance this candidate? http://www.rightwingwatch.org/content/club-growth

… My Turn: More pie in the sky

The $1.8 million comes from a free website (theweddingreport.com) that estimates people spend $22,377 for a wedding. At 80 weddings a year, this comes to $1,790,160. Our City Council naively assumed wedding dresses, engagement rings, gifts and everything else would all be bought in Salisbury by out-of-town guests lured here to get married in what will now be a faux church.

It appears Sacred Heart Catholic Church, Pete Bogle and the Diefenbachs will get their wedding chapel. Too bad they sold out the neighborhood to get it. Maybe Salisbury’s local “Melvis” will get some wedding gigs.

And I’m sure the system will do everything it can to rehabilitate him and get him back on his feet. Certainly this entire area is not ran by racists and there are no sociopolitical reasons affecting people of his color that cause articles like this to be the rule, not the exception.

I wish they would reduce the electric rates even more. But police and fire departments aren’t the ones that need cuts. We need those services badly and they are underpaid already. Raising the water rates, well there goes half of what you saved on power bills.

There must be another way to trim the fat from the budget. If elected officials really want to serve their city, they would do it for free. Instead of relying on volunteer firemen how about a few volunteer council members? Are the expensive retreats really necessary? Most of the retreats I read about seem like a small city-paid vacation. Cut those out all together. … If we are paying 22% more than Duke Power customers, how about letting them provide our power. Sure would help my pocketbook. … Heck, I might be able to go on a retreat, um, vacation with my family.

… Love does win: Vigil held for victims of Orlando massacre

There have been times when I’ve been embarrassed by the “backwards” Southern ways in our state and county. Some stories have even made national news and cast us in an unfavorable light, giving the impression that people here are closed-minded and unwilling to accept change or individual differences.

As I stood last night in the crowd of local people, some friends, others strangers, I felt pride as well as well sorrow. In that group of 300 or so, there were people of many races, genders, religions and identities. We all shared our grief, shock and, yes, some anger at the mass shooting in Orlando. I have hope for our future.

“It’s more than a tragedy. A tragedy is an accident. An atrocity is with intent. And this definitely was with... read more