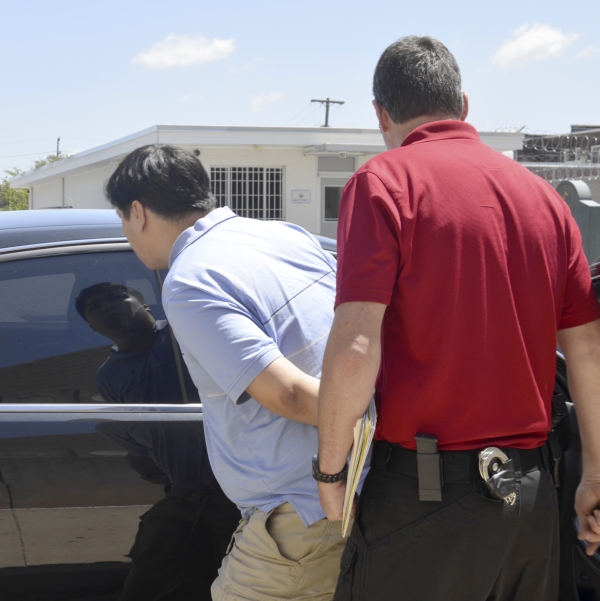 Christopher Brandon Washburn of High Point, who tried to hide his face from cameras, is charged with murder and arson in the death of Joseph David Walker. Salisbury Police brought charges against him today. He is being held without bond. Shavonne Walker/Salisbury Post SALISBURY — A High Point man was charged Thursday with the April homicide of Joseph David Walker, who authorities say was stabbed and his Alexander Place apartment set on fire.

Salisbury Police said Christopher Brandon Washburn, 25, of Guilford County, was arrested at his residence. He is charged with first-degree murder and first-degree arson.

On April 3, the Salisbury Fire Department was called to an apartment at 632 Hamilton Drive for a structure fire. While on the scene, the body of Joseph Walker was found stabbed inside the apartment. Salisbury Police investigators were called.

During the investigation detectives found out Walker had recently moved to Salisbury. They say he and Washburn were friends.

Salisbury Police and lead investigator R.D. Ginn said the State Bureau of Investigation Southern Piedmont District Arson Unit and the SBI task force assisted with the processing of the crime scene. The High Point Police Department assisted in the arrest of Washburn.

Washburn was placed in the Rowan County Detention Center under no bond. A first court appearance is set for Friday.

Walker, an Iraq War veteran, had only lived in Salisbury for a short time and served in the U.S. Air Force from 2000 to 2007. He’d been working for Delhaize Group and moved to the area for the job.

By Josh Bergeron josh.bergeron@salisburypost.com SALISBURY — In a move that Mayor Karen Alexander says would be “a game-changer,” two relatively... read more