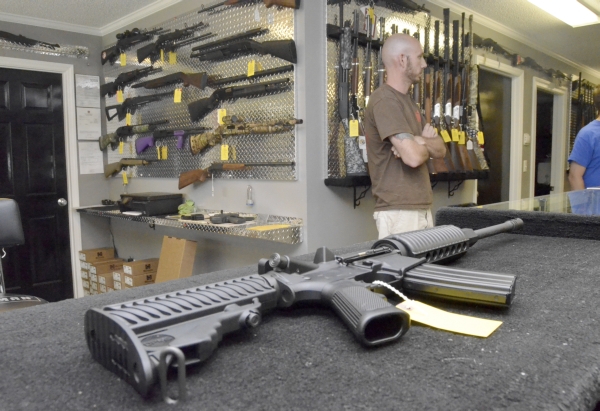 The use of weapons like this AR-15 semi-automatic rifle in mass shootings has sparked talk of limiting access to them. Would that open the door to more gun control?

SALISBURY — The days following the Pulse nightclub shooting where American-born Omar Mateen used an assault rifle to kill 49 people and maim many others, talk has moved not just to the victims, but to understanding the kind of weapon he used.

Mateen, 29, carried a rifle and pistol, which he obtained legally, into the packed gay club and began firing. He engaged in a three-hour standoff with authorities while people were trapped inside with him. Mateen made a 911 call where he pledged his allegiance to ISIS.

Initially, it was reported that Mateen used an AR-15-type assault rifle to unleash his fury on unsuspecting clubgoers, but since the Sunday shooting details have been revealed that he in fact used a Sig Sauer MCX, commonly referred to in military circles as the “Black Mamba.”

Local gun experts weighed in on the confusion surrounding the weapon used in the attack and whether it and similar assault-type rifles should be banned.

The weapon was intended for military use as an advantage over the AK-47 and, contrary to what many people believe, the AR does not stand for assault rifle. The AR stands for ArmaLite Rifle. ArmaLite is the company that manufactured the original weapons and it was the 15th weapon in the company’s possession, explained Rowan County Sheriff’s Deputy Jerry Croyle.

The gun was purchased by the government for military use, adapted and renamed the M-16. Today, many other companies produce their own version of the weapon including the Sig Sauer, the brand of weapon used by Mateen. Sig Sauer MCX is a semi-automatic assault-style rifle that is similar in appearance and capabilities to the more widely-known AR-15.

Semi-automatic rifles can accommodate high-capacity magazines, allowing the shooter to fire off lots of rounds in a short period of time. The AR-15 and Sig Sauer both usually hold about 20 to 30 rounds, but can accommodate magazines that can hold more rounds.

“You can carry more rounds. It’s easier to shoot and the kick is light. You can also use the gun in close quarters combat,” Croyle said.

Croyle, who is U.S. Navy veteran, never used an AR-15 in the service, but used an M-14. He is a firearms instructor and has taught a rifle carbine course.

He explained that a semi-automatic rifle fires a single round every time the trigger is pulled.

The gun is used by many to hunt, as part of competition or a collection, said Gunsmith Brandon Cupp. He owns three, one of which is used for competition.

Cupp, who works out of Pistol Pop’s Firearms on South Main Street, and Manager Adam Ervin both say the fascination with the AR-15-style firearm and the other similar assault rifles, popularized by mass killings, is likely because the gun is easy to use, lightweight and accurate. Gun owners can also customize or modify the gun with scopes or grips and other accessories.

These guns have gotten less expensive over the years, costing from $499 and up to $550 and higher. Cupp said there is a correlation between the price of the gun and its use during violent episodes.

He said after the Sandy Hook shooting, the price for semi-automatic rifles went from $700 up to $1,000.

Ervin said when something tragic happens and talk about gun control begins, the demand for the guns increase. He said it’s because people fear their guns will be taken away.

“If they ban semi-automatic rifles, people will feel like it’s a violation of their rights,” Ervin said.

There are 3 million to 5 million AR-15 rifles in circulation, Ervin said.

Cupp and Ervin agree the weapons have gotten a bad rap because it and other similar assault rifles have been used in mass shootings including Sandy Hook Elementary in Connecticut, the movie theater shooting in Aurora, Colo., and most recently at a holiday party in San Bernardino, Calif.

“The sad part is everybody would look at the gun. The gun is just a vehicle or tool — an effective and efficient tool. If every gun was erased from the planet, what would happen — people would find a rock, bows and arrows. There’s always going to be something,” Croyle said.

He said even if the United States were to close the door on getting semi-automatic rifles and “law abiding citizens would not be able to get them, but criminals would still get them.”