Salisbury Quarter Midget Racing, training the next generation of drivers 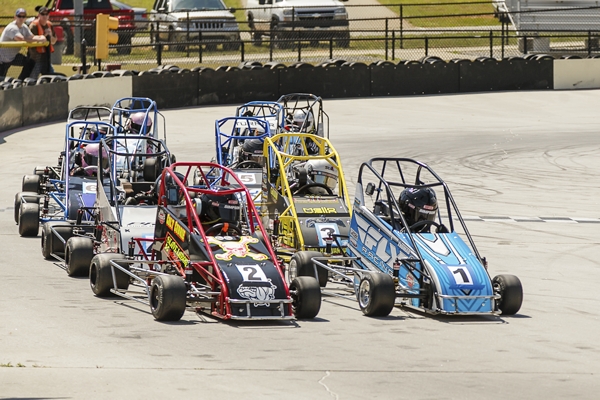 Saturday is Arrive and Drive promotional day at the Salisbury Quarter Midget Race Track in Salisbury. Young people can try their hand at racing one of the vehicles. Submitted photo

SALISBURY —  Do you know a young boy or girl that would like to drive a real race car? On Saturday, they will have their chance.

The North Carolina Quarter Midget Association, located right here in Salisbury, will hold another of their popular “Arrive & Drive” promotional days where children between the ages of 4½ and 16 can drive a real quarter midget race car on a real race track.

The track is located at 1130 Speedway Blvd, just off I-85 exit 72, Peach Orchard Road. During the event, the club provides an operational race car and all the mandatory safety equipment required for racing, including fire suit, certified helmet and racing gloves.

The cost is $15 and each child will receive 15 laps on the track with guidance from the track officials and flagman.

In years past, these promotional days have brought out young boys and girls for many reasons. Some visit just to have fun, while others to celebrate a birthday party with their friends, and many to see if quarter midget racing might be a sport that they would like to participate in full time. Whatever the reason for their visits, all the young drivers that participate walk away from the experience with smiles on their faces.

The track length is designed to keep speeds under control but still lets these young racers hone their skills of driving a fast line, working on a pass, and just being involved in spirited competition.

As in all racing, there is the competitive spirit during the races plus the camaraderie of friendship between the participants off the track. While waiting for their next event, you can find the young drivers and siblings playing ball, riding bikes or scooters around their 20-acre playground, or just chilling out playing video games together.

The club offers competition in 12 divisions based on driver age, experience and motor type. An intensive rookie training program gets young drivers started and teaches them the rules of racing. From Red Rookie through Modified World Formula, there is a class for all young racers.

At the track, NCQMA members compete in two local race series each year:

• The weekend Championship Series holds weekly races on specific Saturdays during the racing season that runs from April through November.

• The Summer Heat Series races on two Tuesday evenings each month during June, July and August.

Each race day, you will find between 50 and 70 cars at the track from NCQMA club members who come to Salisbury from all over North and South Carolina, and even a few from neighboring states.

To complement these local series of races, many families also participate in the Dixie Shootout Regional Series, which includes races at NCQMA and also four other tracks in the southeast. Over Memorial Day weekend, NCQMA played host to the regional participants with double header races that had drivers scheduled to race both Saturday and Sunday.

Dixie Shootout officials said, “This gives our young participants a chance to meet, compete with and become friends with other kids of mutual interest from other states.” On their most recent visit, the Dixie Shootout had 253 cars in the scheduled two-day competition.

Racing, be it in the top series of NASCAR or the newest rookies at a quarter midget track, is a real family affair. Parents and grandparents don’t just watch the action, they are active participants. You will see family members all around the track in volunteer positions to make sure the race day runs smoothly. Others can be found working on the mechanics of the cars and acting as the driver’s handler during the race.

One of the biggest and most rewarding chores for a group of handlers is helping all the racers during a race. If a driver has a mishap on the track and damages a car or loses a chain, there will be a group of fellow handlers ready to jump into action and get the driver back on the track before the caution is over.

One handler told us, “We will stand the car right up on its nose, driver and all, with one handler holding the driver’s head up, and we’ll get that chain back on within a lap or two.”

The original dream of having a quarter midget track here in Salisbury started back in 2002 with Bobby Labonte, the 2000 NASCAR Sprint Cup champion, leading the way. He was one of the many top drivers to get his start in racing in the quarter midget division.

In addition to his brother Terry, a two-time NASCAR champion, other drivers who started in quarter midgets include Jeff Gordon, Ken Schrader and J.J. Yeley.

Terry Labonte said, “I know if Bobby’s involved with it, it’s a first-class facility because he’s going to see to it that it gets done right and wants it to be something we can all be proud of.” The track opened in the spring of 2004.

For an evening or Saturday of racing excitement, everyone is invited to come out and cheer on these young racers. It’s the best bargain in town. Admission to the grounds and grandstand is free.

You can find more information about the club at www.NCQMA.com and on Facebook at NCQMA.