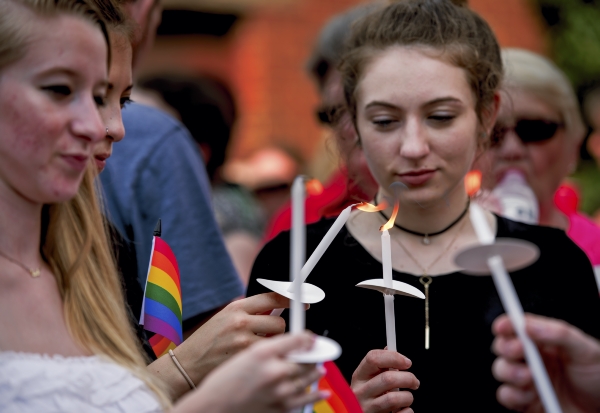 ‘Love does win’: Vigil held for victims of Orlando massacre Sylvia Chillcott, left, and her partner, Patsy Chillcott, mourn together during prayer at Salisbury Pride’s candlelight vigil for the victims of Orlando. Allison Lee Isley/Salisbury Post

SALISBURY — It’s quiet except for the peal of a bell and the sound of sniffles from the crowd. Candle flames dance in the wind, and rainbow-striped pride flags flutter from where they hang in hands and pockets. The bell rings out – one peal for each of the 49 souls killed Sunday morning in a shooting at the Pulse Nightclub in Orlando, Fla.

The vigil, sponsored by Salisbury Pride and held at the Lee Street Theater, attracted nearly 300 people and was a time of mourning for those who lost their lives, and a reminder of what makes us all human.

Many were at a loss for words.

Janine Rhodes said that today was her son’s birthday. As she texted him throughout the day, the tragedy of what happened struck her.

“And I thought to myself, ‘There’s like 49 parents who just lost their kids,’” she said.

Ashley Jo Farmer sang during the hour-long ceremony – a rendition of Phil Collins’s “You’ll Be in My Heart.” Her voice broke with emotion as she entered the first part of the chorus.

After the vigil, she said the loss of those in Orlando hit close to home.

But Farmer said she was also “awed” by the diversity of those who showed up – people from all walks of life and all religions and ways of being. She said if the community could come together, they could build something from this.

As the crowd held candles lit to remember those lost and exchanged hugs, tissues and soft encouragements, speakers from Salisbury Pride and local faith leaders urged the world to band together, and to remember that it’s love that makes each of us human.

“I know it took bravery to come out tonight, and I know all of us are scared,” Tamara Sheffield, president of Salisbury Pride said. But she encouraged everyone to be strong, and move forward.

“This is a call of action to the human community,” she said.

The Rev. Carolyn Bratton of Moore’s Chapel AME Zion Church decried the horrific acts in Orlando, where Omar Mateen, 29, burst into the Pulse Nightclub and used a semi-automatic rifle and a handgun to massacre 49 club-goers and injure 53 more. A SWAT team killed Mateen during a gun battle.

“I would love to be able to stand here today and to say that we will not have to deal with these type of things anymore, but we all know that things happen,” Bratton said. “We cannot run and hide. … Some people may have said, ‘The club that they were in, they shouldn’t have been in the club.’ Well, think back a year ago. Should we not have been in the church in Charleston? Hate does not care where it goes.”

It was up to each person, Brown said, to share the love of God, and to look at each other the same way God has looked at us.

“We can make a difference,” she said, “We don’t want to walk in fear. … We need to stand together – stand in unity – and declare that we are somebody, that we love one another … we are all in this thing together.”

Her sentiments were echoed by every person who spoke – each encouraged choosing love over hatred.

“Our only natural inclination as humans is love,” the Rev. Robin Tanner of Piedmont Unitarian Universalist Church said, “You have to be taught hate. Violence is something you learn.”

Alexander said the shooting was an “attack on diversity and individual liberty” and said that she, and the people of Salisbury, stood and solidarity with all those affected by the shooting.

Syed Ahmad, a Muslim resident of Salisbury, said that people could not view the world through a black-and-white lens – seeing themselves as good, and others as evil.

“I am moved and resolved to do whatever I can. … I hope I am guided not by hate, not by fear, but by compassion and justice for fellow mankind,” he said.

For some, the candlelight vigil — held just before the sponsor’s performance of “Diversified,” a group of six, 10-minute plays to celebrate diversity – was an act of bravery. Tenkamenin Crowder said he’d thought that society had become more accepting since the Supreme Court’s 2014 ruling to legalize same-sex marriage. Then the news Sunday morning. One hundred shot in what should have been a sanctuary and a place of freedom.

Crowder said he’s worried about going to Salisbury’s own Pride Day, which is barely a week away. But still, he refuses to back down, and said he’s going to be louder than ever.

Speakers also encouraged those who showed up to be loud – to speak out against violence and homophobia, to become politically active and fight gun violence, to advocate and, above all, to love.

“The truth is that hatred and violence are not the strongest forces that there are. Love is stronger than hatred, love does win,” the Rev. Kellie Brown with John Calvin Presbyterian Church said.