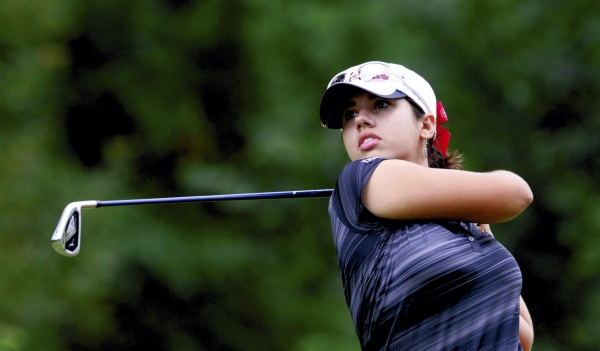 Wayne Hinshaw file photo/for the Salisbury Post ... Salisbury’s Grace Yatawara advanced to this morning’s semifinals of the North Carolina Junior Girls Championship at the Country Club of Salisbury. Yatawara won the event in 2014.

SALISBURY — Salisbury High graduate Grace Yatawara has the advantage of playing on her home course at the Country Club of Salisbury, but she’s also playing with a bit of a wrist injury.
“Oh, it’s just a little thing from over-use, and sometimes I feel some weakness in my arm,” the East Carolina signee and two-time state champion said. “I can feel it now because we’ve been playing so much golf.”
Yatawara is playing in the North Carolina Junior Girls Championship and is still alive after three grueling days of competition. She had to fight for 39 holes on Thursday.
Yatawara plays in a semifinal match today at 8 a.m. There will be an hour break between the semifinals and the championship match that will start around 1 p.m.
Yatawara isn’t blaming her wrist, but she threatened to shoot herself right out of the tournament with a 78 on Tuesday, the first day of stroke-play qualifying. She bogeyed six of her first nine holes and limped to the turn at 41. Only the top 31 (plus the defending champion) would qualify for match play, so Yatawara knew she was in danger of having a short stay in a tournament that she won in 2014.
Logan Shuping, an East Rowan graduate who also signed with East Carolina, was serving as Yatawara’s caddie and helped her get back on track.
“I wasn’t playing well at all, but Logan kept me calm,” Yatawara said. “I was able to hang in there.”
Yatawara made back-to-back birdies on 13 and 14 and shot 37 on the back nine for a 78. That wasn’t what she’s used to, but it enough to keep her in contention.
On Wednesday morning, Yatawara came back rejuvenated and was the best player on the course. She made five birdies, including one on No. 18. Her 3-under 69 was a personal best.
“My first time in the 60s,” she said.
Her caddie for Wednesday’s sizzling round was Salisbury High’s Alex Antosek.
“I hit the ball well, but basically what happened was that I made every putt,” Yatawara said. “I couldn’t miss from 10 feet.”
Yatawara surged up the leaderboard and finished the 36 holes of qualifying in fourth place. That made her the No. 5 seed for the match play portion of the event — behind the top three finishers and defending champion Grace Massengill of Hickory.
Yatawara kept it rolling in her first round of match play on Wednesday afternoon, cruising 7 and 6.
Thursday was a lot tougher, but Yatawara survived two challenging matches.
In the Round of 16 in the morning, Yatawara won, 2 and 1, against Pinehurst’s Elizabeth Nguyen.
Yatawara was 3-up with three holes to play, but Nguyen won No. 16 to stay alive.
Both girls missed the green with their tee shots on the par-3 17th. Yatawara’s chip shot left her with a 15-foot putt for parr, but she nailed it to clinch the match.
Yatawara’s quarterfinal afternoon match with fourth-seeded Rachel Kuehn was a classic.
They halved the first 10 holes. Yatawara won the 11th. Kuehn came right back to take No. 12.
Yatawara went 1-up on the 15th, but Kuehn evened the match again on No. 17. Both parred No. 18.
“We both played 2-under for 18, just really good golf,” Yatawara said. “I was hitting greens. She was making putts.”
The first three playoff holes failed to break the deadlock, and the girls headed to the par-4, 361-yard No. 4 hole.
“That was the crazy hole,” Yatawara said.
Kuehn drove down the middle. Yatawara’s drive was longer, but her shot sliced to the right.
“I was 6 inches from being out of bounds,” Yatawara said with a sigh of relief. “But then she hit her second shot over the green, and that changed the strategy for my second shot. Instead of trying to get through a small opening, I played the ball off to the left.”
Yatawara was able to get up and down with a good chip and by sinking another 15-footer. That putt won the hole and ended the marathon match.
It won’t get any easier today for Yatawara, who made her first hole-in-one last month in a U.S. Open sectional qualifier held at Carolina Trace in Sanford.
Yatawara’s semifinal opponent is Massengill, the defending champ and No. 1 seed. She won her matches 1-up and 4 and 2 on Thursday.
‘She’s a really good player,” Yatawara said. “I’ve played with her several times and I’ve known her since I was about 12.”
In the other semifinal, qualifying medalist Riley Smyth of Cary, the No 2 seed, will take on No. 11 seed Emily Hawkins, from Lexington.