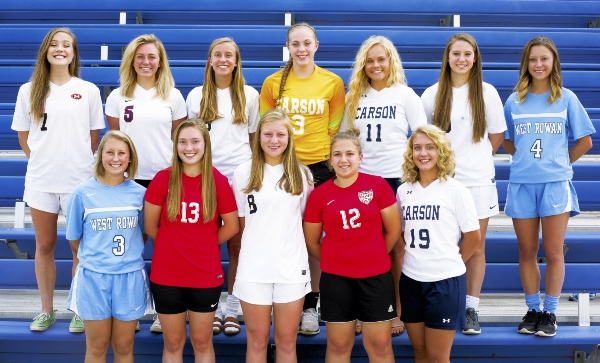 This means that Julia and her sister, Kayla, have pulled off a rare feat — two players of the year in the same family during the same school year. Kayla, a senior, led the all-county girls tennis team last fall for the second straight year.

Julia was also selected to the all-county tennis team and played basketball for the Hornets during her freshman year.

So Julia has been a “busy bee,” for the Hornets, pun intended.

Salisbury was 18-4-1 this spring, led by the Honeycutts and fellow all-county performers Katie Bullock, Kathryn Rusher and Nellie Brown. Like Julia Honeycutt, Bullock and Brown also made all-county last year. Bullock, a junior, was the Central Carolina Conference’s offensive player of the year with 23 goals and 13 assists.

“We had a good year, but, obviously, we were disappointed in finishing third in the conference,” said Julia. “We were shocked by the loss at home to East Davidson and the fact that East beat West Davidson. That’s what put us in third place.”

Honeycutt said that she had hoped to be county player of the year at some point during her career but wasn’t expecting it as a sophomore.

“It’s a big honor, definitely,” said Honeycutt. “It was an unexpected surprise this year but it couldn’t have happened without my teammates and coaches. We have a good team and we’re really a close-knit group.”

Honeycutt, an attacking midfielder, scored 22 goals and added 21 assists for the Hornets. Kayla was also a midfielder, so you didn’t have to strain your eyes to see the sisters at play.

“We’re very close, on the field and off,” said Julia of her sister. “It was fun for both of us, for her to be on the soccer team. She definitely helped me.”

Back to the busy schedule.

Julia plays year-around soccer for her club team, the Lake Norman Eclipse. So in the fall after school, it was off to the tennis courts for practice or a match. Then, three nights a week, she had soccer practice with the Eclipse in Mooresville.

She’d get home and started on school work at about 10 p.m. Then in bed by midnight, to start it all over again the next morning. Julia did catch a break this year, with school starting an hour later. “That extra hour of sleep really helped,” she said.

According to Julia, it also helps that she gets to play for a high school coach like Parrish.

“Coach Parrish sets goals for our team,” said Julia. “We try to accomplish our goals but at the same time, Coach likes everybody to have playing time and have a chance to score. Some games, he’ll take out the starters, which helps to create a very good balance. It’s competitive, but Coach makes it fun.”

Parrish probably didn’t take out Julia Honeycutt too many times, as she led the team with 21 goals and 23 assists, in addition to the being the CCC’s co-Defensive Player of the Year for the second consecutive year.

“My goals are for the team to win the conference and state championship before I graduate,” concluded Julia. “It would be very exciting to win a championship.”

Carson placed three players on the all-county squad, led by goalkeeper Megan Bolick, who received serious consideration for player of the year honors. Mia Trexler and Hannah Smith also made the team from Carson.

Bolick and Smith were repeat performers, having made the all-county team in 2015 as well.

Taylor Mauldin and Katelyn Goodman were selected from South Rowan.