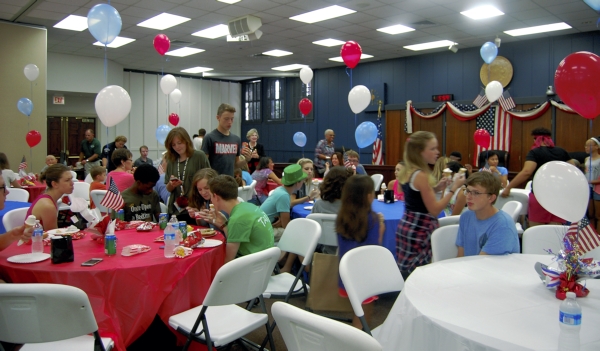 Dozens of people dropped by City Hall on Wednesday to celebrate Salisbury being named one of 20 finalists in the 2016 All-America City competition. The Salisbury Delegation will be giving their final presentation in Denver this weekend. Amanda Raymond/Salisbury Post

SALISBURY — Though the rain poured outside, the community poured into City Hall to celebrate with the Salisbury Delegation for the All-America City Award competition this weekend.

Salisbury was chosen as one of the 20 finalists for the National Civic League’s 2016 All-America City Award competition. A delegation, including city officials and children from the programs included in the city’s application, will be traveling to Denver, Colo. this weekend to give a final presentation for Salisbury in the competition.

Instead of holding the event in the City Hall parking lot as previously planned, everything but the ice cream truck was moved inside because of the rain. Once the rain cleared up, more people gathered outside to enjoy their ice cream.

Mayor Karen Alexander thanked the community members who attended, delegates, steering committee and sponsors who helped raise funds to help pay for the trip. The names of the sponsors were displayed on a banner.

Ten of the 20 finalists will be named All-America Cities.

Some people just came by to have a little fun, like Mary Kathryn Brown and her friends from the Norvell Theater. She will be in the ensemble for the theater’s production of “The Wizard of Oz.” Brown played a plinko game with a chance to win things like candy and a Salisbury mug.

“We came over here because we wanted to eat some lunch and have some fun,” she said.

Ali Khatib watched as his brother Fares had his face painted. Both are going to Denver as part of the delegation. Ali will actually be one of the leaders for the presentation.

“We’re definitely going to win,” his mother Aicha Kahia said. She and her family moved to Salisbury from New York City and she said she has loved living here.

“The community is great,” she said.

Shawn Henderson Sr. and his son Shawn Henderson Jr. will also be going to Colorado with the Salisbury delegation. Henderson Jr. is now a freshman at Salisbury High School, but was a student at Knox Middle School before and after Dr. Mike Waiksnis and Dr. Latoya Dixon became co-principals. He will be talking about his perspective during the presentation.

Henderson Jr. said since he was in the classrooms and walking down the hallways, he was one of the best people to talk about it.

“I think I’m the most experienced one,” he said.

He said he was not nervous about giving the presentation or about his first time being on a plane.

Henderson Sr. said he is excited that his son will be able to see that there is a world outside of Rowan County and outside of the state.

“I’m happy he has this opportunity,” he said.

Henderson Sr. said his son and the other children have been working hard to represent Salisbury in the best way they can.

“He or one of the other kids could be that kid to steal the judges’ heart,” he said.

According to the National Civic League, the award has been known to bring businesses and residents into winning cities.

Henderson Sr. said he would like to see more people employed in the county.

“Hopefully … it will indeed open the eyes of some businesses to consider Salisbury and Rowan County,” he said.