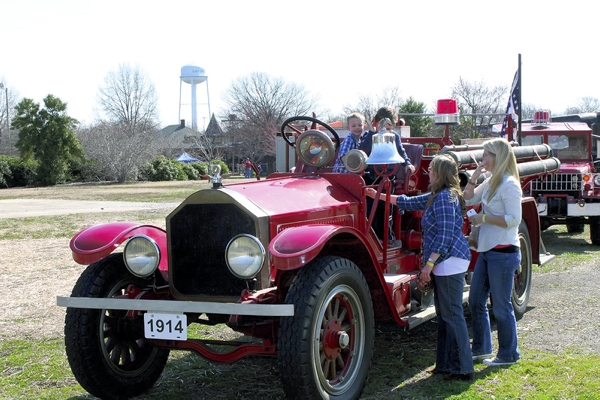 On Saturday, the N.C. Transportation Museum hosts what will be one of the largest gatherings of fire trucks for public display in the state.

The Carolina Artists will meet this evening at 7 p.m. at Rufty Holmes Senior Center, 1120 S. MLK Jr. Ave. This month’s program is on how to put color into your art, led by Phyllis Steimel. Steimel is a member of Oil painters ofAmerica, painting instructor at Waterworks Visual Art Center and founding member of Plein Air Carolina. This is a free program and guests are welcome. Call 704-216-7714.

Harold B. Jarrett American Legion Post 342, 1024 Lincolnton Road, is hosting its monthy dance on Friday from 7-10 p.m. with live music by the Second Time Around Band. Cost is $10 per person, which includes snacks and drinks. Call 704-737-1722 for more information.

CHINA GROVE — The China Grove Farmers Market is open Fridays from 4-6 p.m. at the China Grove Roller Mill. 308 N. Main St. New this year is “Third Fridays at the Mill,” an evening which features music and food from 6-8 p.m.

Gary Freeze to speak at Reed Gold Mine

MIDLAND — Hessian soldier John Reed fought for the British in the Revolutionary War but deserted his mercenary role to join the German community in Cabarrus County in 1782. Reed Gold Mine will present “From Mercenary to Miner” Saturday, June 18, 10 a.m.-4 p.m., to examine his life and early years before the 1799 discovery of gold on his farm. Reed was drafted in Germany and believed to have served in Garrison Regiment of von Wissenbach. He arrived as a replacement soldier in New York in June 1778 and sailed to Savannah that November. When he deserted June 21, 1782, his journey to North Carolina began. Military re-enactors from Royal NC Regiment will portray Hessian soldiers (Regiment Von Bose), British loyalists — Americans who remained loyal to England —and Continental militia. There will be rifle and cannon demonstrations and also artillery and musket demonstrations throughout the day.

Dr. Gary Freeze of Catawba College will lecture on why Germans settled in Cabarrus County, why John Reed chose to return to this area and the importance of Cabarrus County to the North Carolina gold region.

Along with the special activities, visitors can walk through the visitor center, take the underground mine tour, see an 1890s era operating stamp mill and pan for gold. Admission is $5 for adults and children over age 13; ages 12 and under are $2 each. The panning fee is $3.21 for ages 8 and older. All prices include tax.

Rowan Helping Ministries is accepting submissions of cover designs for its 2016 Christmas Honor Card. The submission deadline is Sept. 7 by 5 pm. The winning artist will be honored at an unveiling reception in late October and will be recognized in local media. This year’s reception will be one of a series of events celebrating Rowan Helping Ministries’ 30th anniversary.Designs should reflect Rowan Helping Ministries’ mission of helping neighbors in need. The Christmas Honor Card raises funds to provide critical services to those living in poverty or struggling to make ends meet. For more information and artwork requirements, contact Karen Taylor at ktaylor@rowanhelpingministries.org or 704-637-6838, ext. 100.

Crum featured in ‘Unresolved’ display at the galleries

CONCORD — An exhibition exploring contemporary notions of storytelling through fine art will be on display June 13-July 29 at The Galleries. “Unresolved” includes paintings, photographs, ceramics and mixed media artworks by 10 artists, including Salisbury’s Robert Crum. Crum is a classically trained artist who works out of a studio at ClearWater Artist Studios. He is known for working in a variety of media, including oil paintings, sculptures, mosaics, murals and watercolors. He often paints using the same materials and methods used by the Old Masters. There will be an opening reception for the exhibition Friday, June 17 from 6-9 p.m., during the downtown Concord Art Walk. Some of the “Unresolved” artists will be present, and there also will be visual art displays and entertainment all over town. Guests may take A Closer Look at the exhibition on Thursday, July 28 at 5:30 p.m. The free event will include a behind-the-scenes tour of the exhibition. The Galleries are located in the Historic Cabarrus County Courthouse at 65 Union St. S, Concord. Admissionis free. For more information call 704-920-2787 or visit www.CabarrusArtsCouncil.org

SPENCER — Fire truck lovers will make their way to the N.C. Transportation Museum in Spencer Saturday, June 18, for what will be one of the largest gatherings of fire trucks for public display in the state.

Last year’s inaugural Fire Truck show became the second largest gathering of fire trucks for display in North Carolina. This year, more than 40 fire trucks from departments and private owners will complement the Museum’s collection of vintage trucks and that number will likely increase in the days leading up to the event. Also featured will be rescue vehicles, historic Highway Patrol cars and one of the North Carolina Forestry Service’s helicopters, which will land on site if conditions permit. The Salisbury Fire Department’s Smoke House will be set up on site to teach fire prevention and safety, with “Sparky,” the fire protection mascot. A Jaws of Life demonstration, a disaster response unit, and a drop tank for storage of water during firefighting will also be included. Departments will do water spraying demonstrations for the crowd.

Children will enjoy an exhibit with turnout gear, plus coloring activities, crafts, a popular movie, interactive video games, and more. A dunking booth will provide entertainment for all ages, with representatives of the North Carolina Department of Natural and Cultural Resources, the North Carolina Transportation Museum, various fire departments, and the community taking the plunge. Norfolk Southern will be providing their colorful 9-1-1 “Honoring First Responders” locomotive, which travels their rail system bringing awareness to the important services of law enforcement, fire, and rescue personnel. The locomotive will be posed for photographs near the Bob Julian Roundhouse during the day. The Second Annual Fire Truck Show begins at 9 a.m., Saturday, June 18, and lasts until 3 p.m. Admission is $6 for adults, $5 for seniors and active military, and $4 for children. Admission including a train ride is $12 for adults, $10 for seniors and active military, and $8 for children. In addition, all active fire, police, and rescue personnel with proper identification will be eligible for the military rate, which is 15% off the museum’s regular admission prices. Train rides will be offered at 10:30, 11:30, 1:30, and 2:30. Advance ticketing is not available for this event.

The event will wrap up at 3 p.m. with the spectacular Fire Truck Parade. Immediately afterwards, fire departments wishing to participate in a group photo at the Bob Julian Roundhouse will be invited to pose with the Norfolk Southern 9-1-1 locomotive. For more information, contact the North Carolina Transportation Museum at 704-636-2889 or visit www.nctrans.org.

An Evening with Mark O’Connor

On Thursday, June 23 at 7 p.m., North Carolina Bluegrass Association and the Rowan Public Library present An Evening with Mark O’Connor at headquaraters, 201 W. Fisher St. Doors open at 6:30 p.m. The event is free. Mark O’Connor is enjoying his return to his Bluegrass Roots with a new CD project. He is excited to be back in the south and will be touring festivals with his new Bluegrass band, The O’Connor Band. At age 13, he was the youngest person ever to win the Grand Master Fiddler Championships competing against all ages, amateur and professional. Forty years later, his record still stands. O’Connor is still the only person to ever win national titles (open to all ages) on fiddle, bluegrass guitar and mandolin and has won a record-breaking six Country Music Association Musician of the Year Awards in a row.

Come join the GoBo Run Club on Tuesday, June 21, at 7 p.m. as they put on the annual 2016 Salisbury Pride 5k Fun Run. While not required, the GoBo Run Club is requesting that you wear your best and brightest colors in support of the Salisbury Pride. And the more colors, the better. The run will start in the parking lot across from Rowan Public Library on Fisher Street and loop around through the Fulton Heights area. The run will be a fun run and not a timed run. The GoBo Run Club was created for people who want to go out and be active but also get in some social time. It started as two lone runners last June and has grown substantially over the past year. They welcome all ages and paces to join them on Tuesday evenings at 7 p.m. in the mural parking lot. The runs are usually around 3 miles, but the group modifies their loops to accommodate. After their weekly runs, most of the group will go into Go Burrito for dinner and drinks. For more information, find them on facebook under GoBo Run Club.

Chely Wright rose to fame as a commercial country singer in the 90s, having released eight studio albums selling more than 1,000,000 copies in the U.S. and charted more than 15 singles on the Billboard charts. On the strength of her debut album in 1994, the Academy of Country Music named Chely Top New Female Vocalist of 1995. Her first hit came in 1997 with “Shut Up and Drive” followed two years later by her first number one single, “Single White Female” and in 2005, the zeitgeist – capturing hit “The Bumper of My S.U.V.”

In 2010, Chely Wright released her eighth album, “Lifted Off the Ground” produced by Rodney Crowell, revealing a dramatic artistic transformation and emerging as a singer songwriter of the first order. The album would never have come to be were it not for an equally dramatic personal transformation which she candidly and painstakingly documented in a memoir entitled “Like Me” published by Random House the same day. Chely made history by being the first country music star to come out publicly as gay. Wright has cited among her reasons for coming out a concern with bullying and hate crimes toward LGBT people, particularly LGBT youth, and the damage to her life caused by “hiding”.

In the midst of a tumultuous political climate about the civil rights of the LGBT community, the 2011 award-winning documentary “Wish Me Away” was released. The critically acclaimed film chronicles Chely Wright’s journey growing up and then moving to Nashville to become a country singer. It portrays her preparing for the day she comes out publically and then depicts the aftermath of her decision.

Chely Wright’s soul-searching has led to many rewards. The LGBT role model serves as the national spokesperson for the Gay, Lesbian and Straight Education Network (GLSEN) and speaks out against school bullying. Wright founded The LIKEME Organization, a nonprofit organization that provides assistance, resources and education to LGBT individuals and their family & friends. Wright also founded The LIKEME Lighthouse, an education and community center for gay youth in Kansas City, MO. The Lighthouse recently celebrated its fourth anniversary with a sold out fundraising gala at the Folly Theater featuring Wanda Sykes, Judy Gold, Wendy Liebman and Steve Grand.

Wright will be performing at Nashville Nights June 24 and at Salisbury Pride June 25. Advanced tickets on sale at salisburypride.com