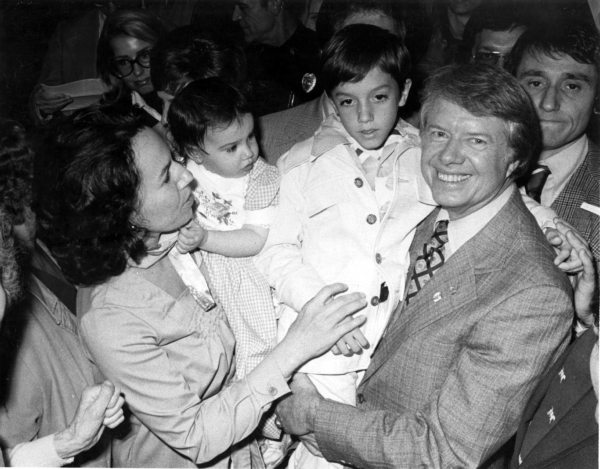 Smith’s enthusiasm for Hillary Clinton covers then — and now Elizabeth Smith, right, poses with Hillary Clinton during Clinton’s 2008 campaign stop in Salisbury. Smith, who first met Hillary when she was first lady of Arkansas, holds an enlarged photograph she took of President Bill Clinton after he had made a campaign appearance for his wife at the depot earlier that year. Photo courtesy of Elizabeth Smith

SALISBURY — When it became apparent last week that Democrat Hillary Clinton will be the first woman to be a major party’s nominee for president, Elizabeth Smith of Salisbury couldn’t have been happier.

You see, Smith and Clinton have a long history. It goes back to Smith’s late husband, Neal, and his stint as assistant deputy commissioner of labor in North Carolina.

Neal Smith had invited Clinton to speak at a N.C. labor conference when she was still first lady of Arkansas and her husband, Bill, had yet to make his own run for the presidency.

“She was just the same then as she is now,” Elizabeth Smith says. “I hate it when people say she doesn’t have personality.”

For three days, the Smiths were Clinton’s constant companions in Raleigh. “We took care of her,” Elizabeth recalls. “… She spoke to everybody and was so kind to everybody. She was so nice to us, too. We just hit it off.”

When Clinton spoke at the conference, she addressed her audience for an hour without using any notes, Smith says.

Elizabeth Smith and Clinton would meet each other again by chance in New York when she and Neal, their daughter Anna and granddaughter Katie were vacationing in New York and planning to see “The Color Purple” on Broadway.

They were staying in the Sheraton close by, and Neal went down to the lobby early one morning to find a comfortable chair — so comfortable that he fell asleep.

Later, Katie was the first to notice a commotion. It was a Secret Service detail accompanying Hillary Clinton. When Hillary recognized Elizabeth, she called out her name, and “the Secret Service about went crazy,” Elizabeth says.

Meanwhile, Anna woke up Neal, and Hillary ended up being as gracious as ever with the couple from North Carolina. “She stayed a long time,” Elizabeth says. “It’s nice to be recognized. We visited for quite awhile.”

After Hillary Clinton won election to the U.S. Senate from New York, Elizabeth called her with congratulations, prompting Hillary to send back a  personal letter, dated Nov. 21, 2000, which she has framed in her Salisbury home.

“That one I kind of treasure,” Smith says.

Neal Smith was supposed to have introduced Hillary during her presidential campaign stop here in 2008, when she was still in a tight battle with Barack Obama, but Neal died before he had the chance.

When Hillary Clinton made her whistle-stop visit here, Elizabeth showed up at the Salisbury depot with an enlarged, poster-sized photo she had taken weeks earlier of President Bill Clinton campaigning in Salisbury for his wife, and she shared it with Hillary.

To say Elizabeth Smith is a Hillary Clinton supporter doesn’t cover her enthusiasm accurately. She can fill her dining room table with political photos taken of state and nationally known Democrats, and Hillary Clinton is well-represented.

She made a poster portrait of Hillary from a photograph she took of Clinton when they met by chance in New York.

There’s also a photograph of Hillary standing with Maya Angelou at the late poet’s birthday celebration in Winston-Salem.

Smith appreciates the history Hillary Clinton is making already as the presumptive Democrat nominee. Clinton has the number of delegates needed from the primary elections to win the nomination at the Democrat convention.

Neal Smith served in the N.C. House for three terms, from 1974-80. He also was a deputy insurance commissioner in charge of the consumers service division, and with the N.C. Department of Labor, he was an assistant director of apprenticeship and training and an assistant deputy commissioner.

In 1988, he was executive assistant of the Dukakis-Bentsen presidential campaign in North Carolina.

On her dining room table, Smith has a Who’s Who photographic gallery of top Democrats through the years, thanks to the political events she and their family attended with Neal, along with her own travels to see her favorite politicians up close.

“We had a lot of fun times, and those are the things you remember,” says Elizabeth, who was once a member of the State Democratic Executive Committee and secretary of the Rowan County Democratic Party.

There are several photos of the Smiths with President Jimmy Carter and First Lady Rosalynn Carter. Former Govs. Jim Hunt and Terry Sanford are pictured with the Smiths, as is a wheelchair-bound Ala. Gov. George Wallace, when he visited the N.C. Legislative Building in the 1970s.

“I wasn’t exactly a big supporter of Wallace,” Elizabeth Smith says, but she bowed to Neal’s request to meet him. “… I don’t particularly claim him.”

Elizabeth has a scrapbook full of photographs of President Obama, the man who, of course, defeated Hillary Clinton for the 2008 Democratic nomination. Elizabeth Smith shot picture after picture of Obama when he made an appearance in Raleigh, and she’s a big fan, but Hillary still comes first.

Now that Obama has endorsed Hillary Clinton for president, Elizabeth Smith says she’s ready to have her own personal photographs of four presidents — Carter, Bill Clinton, Obama and, if she’s elected in November, Hillary Clinton.

“She’s a super person and the smartest person I’ve ever known,” Smith says.

By Mark Wineka mark.wineka@salisburypost.com SALISBURY — Instead of cutting a ribbon, the firefighter way of dedicating a new facility is to... read more