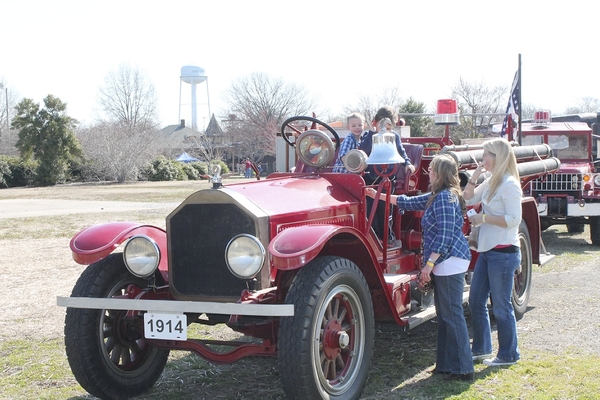 SPENCER — Fire truck lovers will make their way to the N.C. Transportation Museum in Saturday for what will be one of the largest gatherings of fire trucks for public display in the state.

Last year’s fire truck show — the museum’s first — became the second-largest gathering of fire trucks for display in North Carolina. This year, the event is getting bigger. More than 40 fire trucks from departments and private owners will complement the museum’s collection of vintage trucks, and that number will likely increase in the days leading up to the event.

The museum has also seen a massive pre-show public response to this year’s Fire Truck Show via social media. More than 10,000 people have listed themselves as interested in the posted Facebook event and over 1,600 have said they will attend.

Pink Cares Piedmont will be featured, bringing their well-known pink fire truck for cancer awareness. Also featured will be rescue vehicles, historic Highway Patrol cars, and one of the North Carolina Forestry Service’s helicopters, which will land on site if conditions permit.

The Salisbury Fire Department’s Smoke House will be set up on site to teach fire prevention and safety.  “Sparky,” the fire protection mascot, will visit with the crowd during the day and additional fire education programs will be featured. A Jaws of Life demonstration, a disaster response unit, and a drop tank for storage of water during firefighting will also be included. Departments will also do water spraying demonstrations for the crowd.

Children will have access to an exhibit with turnout gear, plus coloring activities, crafts, a popular movie, interactive video games, and more. A dunking booth will have representatives of the North Carolina Department of Natural and Cultural Resources, the North Carolina Transportation Museum, various fire departments, and the community taking the plunge.

Norfolk Southern will be providing their colorful 9-1-1 “Honoring First Responders” locomotive, which travels their rail system bringing awareness to the important services of law enforcement, fire, and rescue personnel. The locomotive will be posed for photographs near the Bob Julian Roundhouse during the day.

The event will wrap up with the Fire Truck Parade. Immediately afterwards, fire departments wishing to participate in a group photo at the Bob Julian Roundhouse will be invited to pose with the Norfolk Southern 9-1-1 locomotive.

For more information, contact the North Carolina Transportation Museum at 704-636-2889 or visit www.nctrans.org.