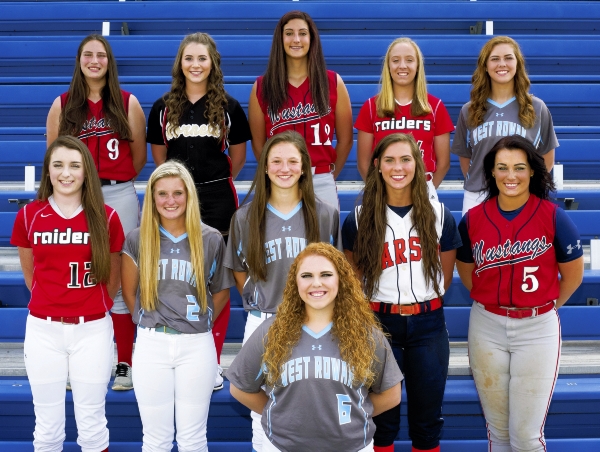 SALISBURY — West Rowan’s Peyton Greene tore an MCL, partially tore an ACL and dislocated her kneecap when she was injured in a fall tournament.
That left her with two options — undergo surgery and miss her senior softball season or rehab and give it her best shot at less than 100 percent.
“I knew it was a tough injury, and I knew I was going to have to be mentally strong with it,” Greene said. “But I also knew my teammates had my back. Even if I wasn’t as good as I had been, I knew we’d pick each other up, and we’d win or lose as a team.”
As it turned out, 80 or maybe 90 percent of Greene, a two-way player, was still really good.
Yes, her powerful bat dropped off a bit, but she compensated with pitching that was better than ever. Her strikeouts went up, her walks and hits allowed decreased, and she was the biggest reason West Rowan was the county’s best team for the third straight year.
After back-to-back 18-6 seasons, the Falcons (18-7) didn’t slide far, even after graduating NCAA Division I signees Hunter Gibbons and Marissa Yow.
Greene, who posted a 2.29 ERA in a strong league, was the South Piedmont Conference Pitcher of the Year and is also the Salisbury Post’s Rowan County Player of the Year for the first time. Gibbons won the award the previous two seasons.

Greene finished her career with 440 strikeouts, with 423 in her last three seasons. She had a career-best 176 Ks as a senior and logged all of West’s 18 wins. She won 49 games in her varsity career.
“Peyton had the best pitching season of her life as a senior and pitching is what wins games,” said Jimmy Greene, West’s head coach as well as Peyton’s father. “Where the injury really affected Peyton was her hitting. She was still clutch, but she had to go for base hits instead of looking to drive the ball out of the park.”
A lefty, Greene was productive as a hitter, although her power numbers weren’t close to what she did her junior year when she batted .464 with five homers and 28 RBIs. As a senior, she had a homer, 18 RBIs and a .313 batting average.
“It wasn’t easy to get the knee injury out of my head whenever I was hitting,” Peyton said. “But we still won a lot. The team did better than anyone expected.”
A pitcher for most of her life, Greene will miss staring in at batters from the circle, but she’s looking forward to life as a regular college student at N.C. State.
Parker Greene, a sophomore who replaced Yow as West’s catcher after spending her freshman season in center field, also replaced a lot of her big sister’s offense. She’s a potential Division I player and produced a .545 on-base percentage. She led the Falcons with a .429 batting average, three homers, nine doubles and 24 RBIs.
Most important, Parker did the job behind the plate. Wild pitches and passes balls were rare for the Falcons.
“Parker had big shoes to fill and she did a great job,” Peyton said. “It was cool throwing to my sister. At times, we’d have to give each other a little constructive criticism. But at other times, it was like we were reading each other’s minds.”
West senior Taylor Martin is an annual member of the all-county team. Martin shifted to center field from second base as a senior, a move that will give her a head start on her college career. She’ll likely be an outfielder at Catawba.
Martin batted .325, didn’t make an error all season, led the SPC with 19 steals and paced the Falcons in runs scored with 25.
“She showed her versatility and she proved to be the best center fielder in the conference,” Coach Greene said.
West shortstop Mary Sobataka, a freshman who was asked to replace Gibbons, is the fourth Falcon on the all-county first team.
Already committed to Appalachian State, Sobataka batted .333 with 13 RBIs and was smooth defensively.
“She stepped up as a freshman and allowed us to finish second in the best conference in the state,” Coach Greene said.
Coach Greene also had an impact on West’s success. He’s the Rowan County Coach of the Year as well as the SPC Coach of the Year.
East Rowan was young but turned in a strong season (15-9, 12-6 SPC). The Mustangs are represented on the all-county first team by sophomore pitcher Anna Shafer and junior sluggers Coryn Soul and Ashlynn Mills.
South Rowan placed two sophomores on the all-county first team. Both had lights-out on-base percentages above .500. Riley Corriher batted .459 and scored 20 runs. Brooke Lowery batted .378 with six doubles and 13 RBIs.
Carson’s all-county players are juniors Brie Bauer and Madison Barnhardt. Bauer, a catcher, batted .400 with eight doubles and led the Cougars with 28 hits. Barnhardt, an outfielder, batted .381.
Salisbury pitcher Caroline Forbis is all-county for the fourth straight season. As a senior, Forbis struck out 128 batters while walking only 20. She also batted .438 with a homer, three triples and four doubles. Forbis accumulated 416 career strikeouts.