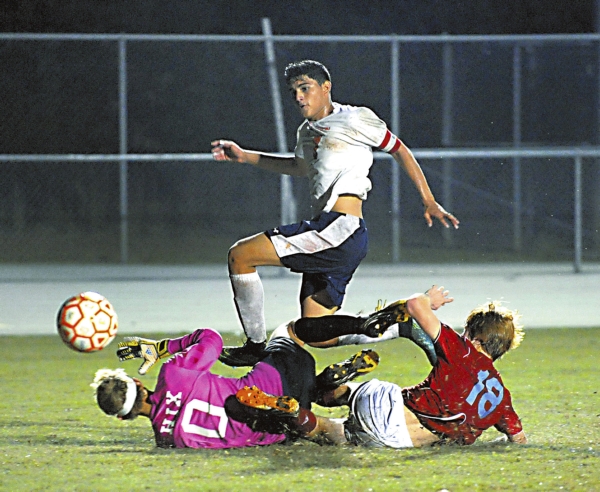 Wayne Hinshaw file photo/for the Salisbury Post ... Carson’s Ricky Maldonado (7), shown scoring during a playoff victory last November against North Iredell, has announced that he will continue his education and soccer career at UNC Pembroke.

CHINA GROVE — Carson midfielder Ricky Maldonado found his greatest joy in putting talented teammates in position to score, but he also could rattle the back of the net when the Cougars needed it most.
Proof of that came in the playoffs last fall. Maldonado produced five goals in Carson’s three 3A state playoff games.
“He was a selfless player on the field, always looking to set up his teammates,” former Carson coach Ryan Winchip said. “But when provided an opportunity to finish, Ricky was deadly.”
Maldonado will continue his soccer career at UNC Pembroke where his roommate will be a friendly rival — Salisbury’s Cristian Uribe.
“We’ve known each other since we were playing club ball in fifth grade,” Maldonado said. “That’s when I was just getting started in soccer.”
Maldonado, All-Region 3, All-South Piedmont Conference and a two-time All-Rowan County player was instrumental in a powerful three-year run by Carson that included a 57-10-1 record and five state-playoff victories. Carson went 44-5-1 in conference matches while winning three straight SPC titles. Carson outscored opponents 279-66 during those three seasons.
“I got to play with great players and on some great teams,” Maldonado said. “I really enjoyed putting together plays for my teammates, but I also felt like I could score. I had 24 or 25 goals as a senior. My senior season was my best of all.”
Maldonado took charge of Carson’s first-round playoff match against North Iredell, assisting on an early goal by Pfeiffer-bound Colton Correll, and later scoring twice himself, in a span of 57 seconds, to put the game away.
Maldonado also scored both Carson goals in the 3-2 loss to Asheville in the third round that ended the career of nine Carson seniors.
Maldonado signed late in the recruiting process, but as was the case with Uribe, he had options. It was just a matter of finding the school and the coaching staff that felt right. He found what he was looking for at UNC Pembroke, which is rebuilding under after a 5-8-2 season.
Former King head coach John Miglarese was hired to lead the Braves last February, and Bennie Bardales came on board as the assistant coach.
“I know it’s pretty far away, but I liked the school, in general, and I liked the coaches,” Maldonado said. “They’re bringing in a few transfers and they’ve put together a very strong recruiting class. It’s good to be part of it.”
Maldonado’s career goals include more than soccer goals. He’ll either seek a business degree at UNCP or take pre-engineering coursework. He would need to transfer to another UNC system school down the road to get an engineering degree.
Winchip expects success for Maldonado on and off the field.
“He’s a true leader, came to practice every day and was the hardest worker on the field,” Winchip said. “I wish him the very best.”