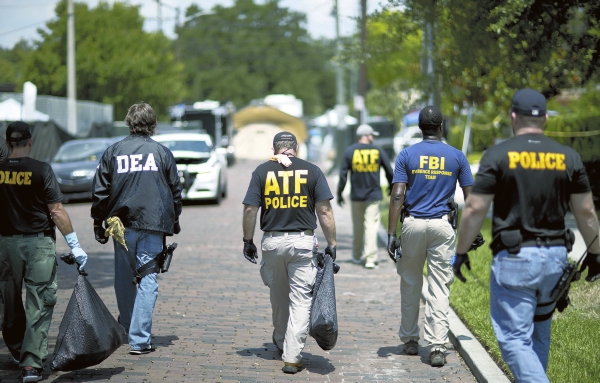 Federal and local law enforcement officials walk Monday through the street next to the scene of a mass shooting at a nightclub in Orlando, Fla. AP photo

Monday morning quarterbacks have questioned why Orlando SWAT teams waited three hours early Sunday before breaking into the nightclub where a mass killer was holed up in a bathroom.

The experts will have to hash that out. But from this citizen’s point of view, it appears Orlando police arrived swiftly and saved a lot of lives.

According to several reports, an off-duty officer who was working at the Pulse nightclub first responded to the shooter’s gunfire. More officers arrived within two minutes. They exchanged gunfire with the killer, and he retreated to a bathroom with what police believed to be four to five hostages. Fifteen to 20 people were in another bathroom.

Now comes the standoff in question. While dozens of people lay bleeding on the nightclub floor, the shooter started a series of phone conversations with police. Whatever he said gave officials the impression that he was wearing a bomb vest or had a bomb with the potential to kill more people. Does the SWAT team storm the building and risk the lives of the hostages and the wounded people who were still alive, or do they wait him out?

At some point law enforcement officials decided to take action. They punched holes in the wall of the club. People trapped inside fled, followed by the killer. He came out firing, officers fired back and he was killed.

Now the dissection begins. Investigators will pick apart every second of the mass shooting, every bullet fired, every command given. (Don’t get us started on the FBI.) Once again, though, the public should be reminded that as club-goers were fleeing the violence, two police officers rushed in. They’d had active-shooter training and they knew what to do. A shooting spree that could have become even more of an atrocity came to a halt, and untold lives were saved. Thank you, law enforcement officers, for answering the call and protecting the public.