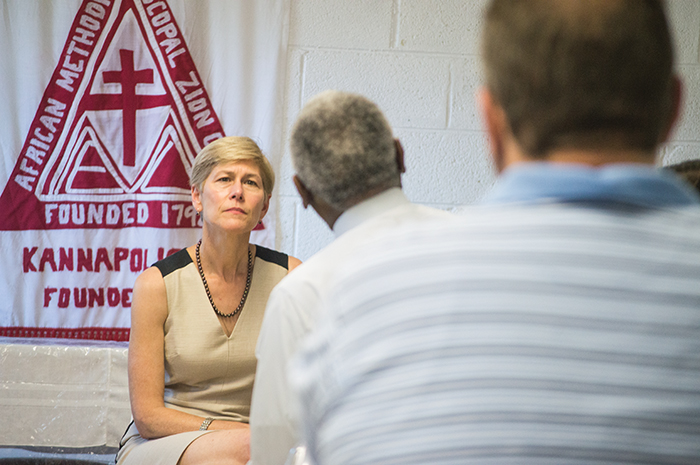 Ross, the state’s Democratic Party nominee for U.S. Senate, made her comments on Monday when visiting Bethel A.M.E. Zion Church in Kannapolis to talk about the economy. When the church’s pastor referenced Orlando in a prayer before Ross’ campaign event started, she briefly spoke about the shooting. Ross also answered questions about issues pertaining to the shooting after the event.

“Our law enforcement did a beautiful job of making sure that the perpetrator was stopped, but there’s no excuse for this kind of violence,” Ross said during Monday’s event. “I’m sure in the days and weeks ahead we’ll talk about how we can prevent these kinds of tragedies from happening … We need to stop hate, and the only thing that can stop hate is being smart but also loving.”

When asked after Monday’s event, Ross said “the right time is now” to talk about issues that include gun safety. She specifically used the term “personal safety,” and said background checks could be a way to ensure terrorists and people who have a history of violence don’t have access to guns.

Ross said “the second amendment is very important, but we have to have commonsense gun safety.”

“We start by using the best intelligence, the best law enforcement and the best military in the world,” Ross said. “We also need to pay attention to our environment and make sure that what our officials talk about promotes security rather than promoting hatred and separating and dividing people. That would be more of a reflection of what’s going on with Orlando.”

In the case of the Orlando shooting on Sunday, a man named Omar Mateen legally purchased two firearms within a week prior to the incident. He entered an Orlando nightclub called Pulse, sprayed bullets into the crowd and called 911 to pledge allegiance to the Islamic State. A total of 49 victims were killed and 53 more were injured. Mateen was also killed in the incident in a shootout with police.

Mateen was known to law enforcement, but was never determined a threat. There was no active investigation involving Mateen at the time of the shooting. He was interviewed twice by law enforcement officials following inflammatory comments in 2013. Officials discovered in 2014 that Mateen had ties to an American suicide bomber, but the ties didn’t pose a threat at the time.

Other than a short statement about Orlando at the beginning of Monday’s event, Ross focused on the economy while speaking to a group of about 15 people. Ross said issues of personal and economic safety are “both tremendously important.”

During her Monday event Ross took suggestions about important economic issues and answered questions from the group of attendees. Ross expressed support for free community college “if kids do well in school.” In certain sectors where safety wouldn’t be a concern, Ross said felons should be able to apply for jobs without crimes counting against them.

“If we want to prevent people from committing other crimes, we need to have a robust re-entry program,” she said.

She also expressed support for raising the minimum wage and paying women and men the same wage if they do the same job.

Ross is in the midst of a statewide tour about economic issues. Her next stop on the tour will be at 3:30 p.m. tomorrow at Stamey Farms in Statesville.

She faces two-term incumbent Sen. Richard Burr, a Republican, in the November general election. Burr, the chairman of the Senate’s Select Committee on Intelligence, released a statement shortly after the shooting in Orlando. At the time, Burr said, “we should allow the investigation to unfold.” Burr said he was “confident the Federal Bureau of Investigation and its law enforcement partners would be able to present a full picture of the suspect, his motives or inspiration, and his background.”