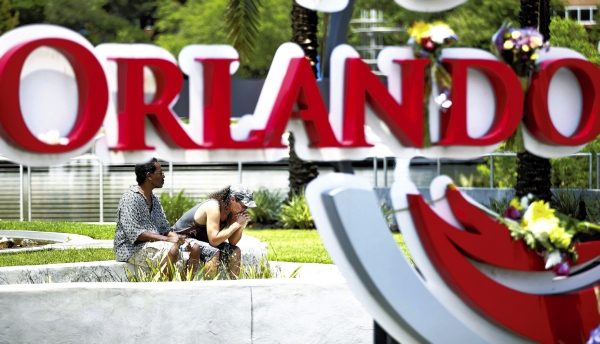 Brett Crowe, right, sits with friend Myron McCullough, down the street from the scene of the fatal shooting at a nightclub Monday, June 13, 2016, in Orlando, Fla. Crowe was supposed to go the club the night of the shooting but decided in the last minute he didn't want to drive. (AP Photo/David Goldman)

SALISBURY — Tamara Sheffield, president of Salisbury Pride, said she has been following the coverage of the shooting that happened at an Orlando gay nightclub on Sunday for the last couple of days.

Not speaking as the president of Salisbury Pride, Sheffield said there were probably people watching the news coverage and thinking that the victims deserved what happened to them.

“No human deserves any act of violence,” she said.

Sheffield is planning a candlelight vigil to honor the victims and families and friends affected by the shooting.

The permit application was submitted and approved on Monday. The Salisbury Police Department will close a portion of the 200 block of East Kerr Street for the vigil to take place outside Lee Street Theatre on Wednesday from 6 p.m. to 10 p.m.

Sheffield said she wanted to get a blood mobile, but had not secured one as of the early afternoon on Monday.

The vigil will probably last an hour and a few speakers will talk about the shooting and pray.

Sheffield said the vigil will be an opportunity for the community to openly grieve and unite.

Although she hopes many from the community will come out to the vigil, she said she is personally tired of them.

“I feel like we need a call to action, specifically against gun violence,” she said.

Sunday’s mass shooting at Pulse in Orlando, Fla., was deemed the deadliest mass shooting in modern U.S. history, with the last of the 49 victims pulled out of the night club late Sunday.

Omar Mateen, a 29-year-old American-born Muslim, opened fire on club-goers with an AR-15 semi-automatic rifle and handgun on Sunday morning.

According to the latest reports from the Associated Press, 49 people died in the attack and at least 53 were hospitalized, including five in grave condition. A SWAT team killed Mateen during a gun battle.

“This is an act of violence no matter how you look at it,” she said.

Mayor Karen Alexander recently declared June 25 as Salisbury Pride Day. Alexander said the decision was based on all that the organization does for the community, including partnering with Faithful Friends, ARC Festival of Trees and Chickweed to benefit the Rowan Family Crisis Council. Salisbury Pride also gives scholarships to Rowan-Salisbury School System students and has supported anti-bullying campaigns.

Alexander said she and the rest of the U.S. Conference of Mayors have extended their sympathies to Orlando Mayor Buddy Dyer.

“It’s more than a tragedy,” she said. “A tragedy is an accident. An atrocity is with intent. And this was definitely with intent.”

Betty Jo Hardy, chair of the Covenant Community Connection, said she was “terribly disturbed” that people have that kind of access to guns.

Hardy works to promote respect and education regarding different religions. She said although there are radicals in every faith, she does not think people in the Islamic community feel that Mateen represented that faith.

“Our thoughts should not be one of lashing out against the Islamic religion,” she said.

Sheffield said she is proud of Salisbury Police Department’s efforts in keeping the events of Salisbury Pride and other organizations safe and has faith that they will continue to do so.

“We’re as good as we can be, but you can never predict the act of one person,” she said.

Hardy said there is always something to be learned from tragic events, and she hopes people will educate themselves on the LGBT community and the Islamic faith.

“I would hope that we would all seek to strive to be more understanding and respectful of one another,” she said.

Alexander said it is important for the community to “come to the middle of issues to arrive at common ground for the common good.”

“In every tragedy, there’s an opportunity for us to learn and to recognize the futility of killing each other because of our differences, because soon we wouldn’t have any citizens left,” she said.

Sheffield said individuals, as a human community, have to band together to stop the violence.

“I think we have to come out of this stronger and united as humans to make this community better, and it all starts at home,” she said.