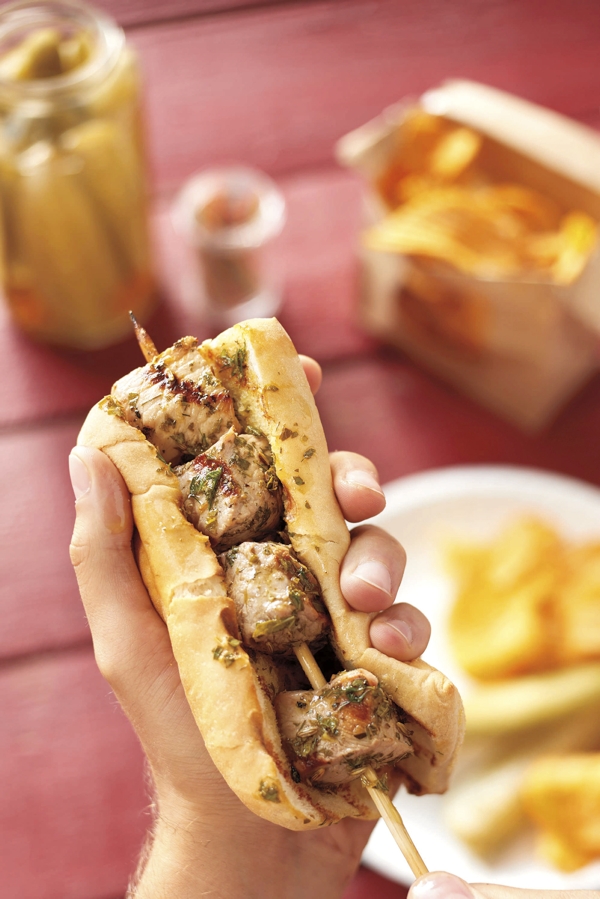 Master barbecue season with these 10 tips from grillmeister Jamie Purviance

Master your grill with tips from an expert

With grilling season having officially begun, thoughts turn to the big issues — namely, who cleans the grill?

That should be on your list — or someone near and dear — before the food even leaves the kitchen, which makes sense to anyone operating the grill.

But to be even more prepared for the summer cooking season, we turned to the grillmeister himself, Jamie Purviance, author of 15 books for Weber Grill, three of them New York Times bestsellers (“Weber’s Way to Grill,” a James Beard Award finalist; “Weber’s Smoke,” and “Weber’s New Real Grilling”). His new book, “Weber’s New American Barbecue: A Modern Spin on the Classics,” is hot off the presses.

Purviance, a graduate of Stanford University and the Culinary Institute of America, has explored what would seem to be every aspect of the grill, whether charcoal or gas.

We asked him for a Top 10 list of do’s and don’ts for making the best meal outdoors. Here’s what he had to say:

Do preheat the grill. A lot of cooks use a grill that’s not properly preheated and they end up with food sticking or not browning very well, and not tasting particularly good, either. If the grate is cold, the food will stick and never have a decent chance of searing properly or developing those awesome grill marks. Even if a recipe calls for medium or low heat, you should preheat the grate on high first for 10 minutes. The grill temperature should reach at least 500 degrees.

Don’t start with a dirty grate. If you left some stuff on the grate from your last barbecue, it could be the glue that holds your new food to the grill a lot longer than you want. To clean the grill, wait until the grill gets very hot (preheat it for at least 10 minutes), then scrape off the last meal. The best tool for the job is a sturdy, long-handled brush with stiff, stainless steel bristles.

Do get your act together. Bring everything you need near the grill before you start to cook. That means all the necessary tools, as well as food that is prepped — oiled and seasoned — along with any glaze or sauce or whatever else. Don’t forget the clean platters for the cooked food.

Do give yourself at least two heat zones. Have one for direct heat (where the fire is right under the food) and one for indirect heat (where the fire is off to the side). This provides some flexibility, so you can move your food from one zone to another if the food is cooking too quickly or the coals are flaring up. Think of this as a safety zone. It also allows you to grill two very different foods at one time. There are foods that do well with a combination of types of heat, such as when you sear food on one side and then cook it more slowly on the other.

Don’t overcrowd the grill. Packing a lot of food into a tight space is asking for trouble because it restricts where you can move the food. Case in point: If you try to squeeze too many pieces of food over direct heat, the pieces at the edge of direct heat, right where the indirect heat begins, will cook unevenly. The direct heat should extend at least 3 inches beyond all the items you are grilling. And try to leave some space between each item of food so that you get your tongs in there easily and move the food from one area to another. Purviance typically leaves 25 to 30 percent of the grill open so he has the flexibility to move food around.

Do use the lid. Keep the lid down as much as possible. It traps some of the smokiness that develops on the grill, which is important for flavor. It also eliminates a lot of flare-ups that are fueled by air rushing through the grill. Keeping the lid down also tends to cook things a little faster because now the heat is coming from below and above, reflecting off the lid. That’s really good for quick-cook items such as chicken breasts, hamburgers and pork chops, which dry out quickly. If you can cook them less on both sides by a couple minutes, they will be juicier. Don’t forget to open the vents of a charcoal grill’s lid at least halfway. Every fire needs a little air to keep on burning.

Don’t fiddle with food so much. Turn the food only once or twice. This is really important. It means you won’t have the lid open so much, which affects how quickly food cooks (which impacts how dry it becomes). Cooks tend to try to turn food too early. This is especially true of fish and chicken with the skin on. As soon as food lands on the grate, it tends to stick, but if you leave it long enough, it releases. The problem is most cooks don’t wait long enough, so they end up with some issues with sticking. And if you move the food too much, it never really develops as deep a sear as it could.

Do take charge of the fire. This is more of an issue with charcoal. Lit charcoal changes over time. It’s quite hot in the beginning and then it fades out slowly or quickly. You need to take charge of the fire by refueling it, by pushing the coals around to suit your needs, by sweeping away the ashes that clog the bottom vents, and by adjusting the vents on the lid for optimal airflow. For the best result, anticipate what the fire is going to need and act proactively.

Do watch for doneness. Sometimes in grilling the most important thing to know is when to stop. Learn some doneness clues, as in the gently yielding firmness of perfectly grilled chicken when you press the surface with a fingertip. If you want an even more reliable test of doneness, get an instant-read thermometer, which will help you pinpoint that critical moment when your food is at its best.

Do use the grill for more than grilling. This is the spirit of the new book, that there is more to grilling than meat over the flames. There is a whole world of techniques that you can do on a grill, whether it’s charcoal or gas. You can smoke or roast, simmer, sauté or stir-fry on the grill. If you want to be a true master of the grill, expand your repertoire and do a more mixed menu.

Note: A spiedie is a type of hoagie from Binghamton, N.Y. Cubes of meat are marinated with a combination of Italian seasoning and mint, and then cooked and arranged, skewer and all, in a long roll or slice of Italian bread. This recipe must be prepared in advance and requires 6 long bamboo skewers and a handful of hickory wood chips. From “Weber’s New American Barbecue: A Modern Spin on the Classics,” by Jamie Purviance.

6 Italian or French sandwich rolls, cut lengthwise in half but not all the way through

In a large bowl whisk the olive oil, vinegar, lemon juice, mint, parsley, dill, garlic, salt, fennel seed and pepper. Reserve and set aside 1/4 cup plus 2 tablespoons to drizzle over the cooked pork. Place the pork chunks in the large bowl with the remaining marinade, cover and refrigerate for 2 hours, stirring once.

Soak the skewers and wood chips (separately) in water for at least 30 minutes.

Prepare the grill for direct cooking over medium heat (350 to 450 degrees).

Thread pork cubes onto the skewers. Discard the marinade. Drain and add the wood chips to the charcoal or to the smoker box of a gas grill, and close the lid. When smoke appears, grill the skewers over direct medium heat, with the lid closed, until the meat is evenly seared and cooked to an internal temperature of 145 degrees, 9 to 11 minutes, turning occasionally. During the last minute of grilling, toast the rolls, cut side down, over direct heat.

To serve in the authentic style, place a skewer on each roll and, using the roll as a pot holder to grasp the meat, twist and pull out the skewer, leaving the pork cubes in a neat line right down the middle of the roll. Drizzle each spiedie with 1 tablespoon of the reserved marinade and serve right away.

Note: The brilliant idea for these accordion-looking potatoes came from the chefs at Restaurant Hasselbacken in Stockholm. From “Weber’s New American Barbecue,” by Jamie Purviance.

6 russet potatoes, each about 12 ounces, scrubbed and dried

Prepare the grill for indirect cooking over medium-high heat (400 to 450 degrees).

So that each potato will lie flat on the cooking grate, cut off a very small piece (1/4 inch or less) on the widest side of each potato, which will now be the bottom side. Then, using a very sharp knife, starting 1 inch from the end, cut slits crosswise into each potato, 1/8 to 1/4 inch apart, stopping just before you cut through so that the slices stay connected at the bottom.

In a small skillet over medium heat on the stove, melt the butter. Add the garlic and cook until lightly browned, 1 1/2 to 2 minutes, stirring occasionally. Remove the skillet from the heat and add the salt and pepper. Fan out the layers of each potato enough that you can get some butter and seasonings inside the layers. Brush the potatoes, including the bottoms, with half of the butter mixture.

Top the potatoes evenly with the cheese and cook until the cheese is melted and slightly browned and the potatoes are crisp on the outside and tender on the inside, 5 to 10 minutes more. Garnish with the parsley and serve hot.

By Mark Wineka mark.wineka@salisburypost.com SALISBURY — Instead of cutting a ribbon, the firefighter way of dedicating a new facility is to... read more