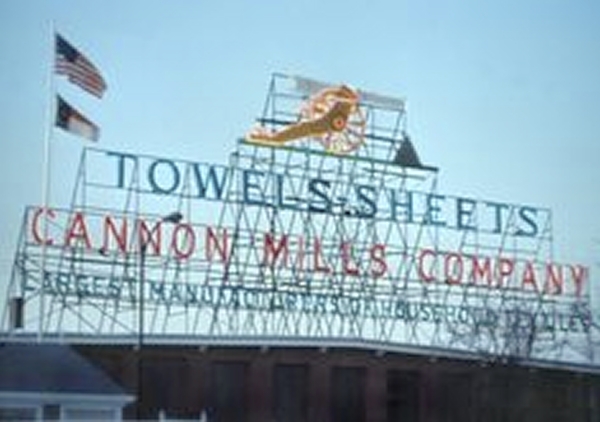 The sign at Cannon Mills in Kannapolis years ago.

Larry Efird: The sound of cotton

School is finally out for the summer. You would think that after 30 years as an educator, I would only feel a great sense of relief after all my final grades are posted and my room is totally clean for the first time in the last 10 months. But I also feel a slight pang of insecurity gnawing in my gut. What am I going to do with the next two months of my life? People often say, It must be nice to have the summers off. I’d be lying to say I’m not glad to have an extended break, but I want to tell them in reply, Having the summer off is wonderful, but I also don’t get a paycheck when I’m not working. Looking for jobs, part-time or full-time, has never been one of my favorite pastimes, but the bills keep coming, even when the school year stops.

Looking back, I always had this same apprehensive feeling as a teenager during the first days of my summer job at the local cotton mill. Although I had been set free, temporarily at least, from the clamor of annoying  tardy bells, I still had to obey my obnoxious alarm clock on a daily basis. Every day was somewhat different, but just like school, invariably the same. I liked school, but I hated the mill, not because of the paycheck, but because it was dirty. I tortured myself by constantly remembering that I was wasting the precious days of summer vacation sweating in a dreary room with prison-gray walls, rather than effortlessly perspiring on a sun-splashed beach with an infinite ocean before me. The unwanted truth was, however, that sweating equaled money, and perspiring equaled nothing. The former perspective was my harsh reality, and considering the beach was four hours away, the latter viewpoint was nothing more than an elusive dream. I didn’t always enjoy living in a state of reality; I often preferred vacationing in a land of dreams whenever I got the chance.

The kids I teach now won’t ever know that feeling of entrapment in the mill, because it’s no longer standing, so they’ll never have to work there. I try to tell them stories about it, but the only thing they can vaguely remember is the annual Christmas light display of larger than life toy soldiers, who would shoot off a cannon over the town lake in front of the mill, during the holiday season. Some of their parents and grandparents worked in the mill, so they’ve heard a few lint-filled legends regarding the Cotton Castle, I’m sure, which dealt with fire-breathing dragons of machinery in the warp rooms and tricky Green Knights of West German looms in the weave rooms. But, fortunately, the humble serfs always overcame their threatening adversaries — those heavy-laden responsibilities and burdens of life everyone has to face sooner or later. In fact, the commoners knew the secret of how to get along with their enemies. They didn’t continue to fight them; instead, they wisely declared a truce, and in the process, ensured better lives for themselves and their children.

Now that I’m older, I realize that as much as I hated the mill during the Medieval Period of adolescence, I also appreciate what it taught me. Perhaps some of the most important lessons I learned during my three years of high school were not in a classroom, but in a weave room. One significant observation was that running factory seconds takes just as long as running first quality towels and sheets. A single thread out of place can make the difference in a towel being perfect or imperfect. People aren’t ever perfect either; they’re more like factory seconds. I sure made my share of imperfect cloth during those summer months. I did my best each day, but some factors were out of my control when running the looms, such as high humidity in the weave room or using thread that had been starched too heavily in the warp room. Both maladies negatively affected the rolls of towels my looms were producing at times, and exasperated me, the weaver, in the process.

A factory second is just as useful as a first, but it is not as pretty to look at to the trained eye. It could never bring full price in a department store, and maybe not even in an outlet; yet it could fulfill its function just the same, but without the glamour. I saw this image as a metaphor of my own life, and how I could compare it to a roll of cloth that came off one of my looms. The biggest problem with high school was trying to keep all my flaws to myself and hoping no one else would see them. What I didn’t know then was that everyone else was flawed as well. We were all factory seconds, but we all had value. There might be such a thing as a perfect towel, but there is no such thing as a perfect person. I had to learn how to see my value in light of my usefulness and not in what I saw in the mirror every morning. Although American culture has always had a knack for exalting glamour over usefulness, most of the folks I lived around had the integrity of usefulness rather than the fickleness of glamour. Since they were happy people and seemed content with their lives, my goals for fame and fortune took a back seat to common sense and practicality. I wanted a life I could catch and hold onto, not one that I would always be chasing like a child running after his shadow.

I’ll never forget the crashing reverberations only found in an acre-sized room filled with hundreds of pounding looms which were simultaneously turning giant warps of individual threads into useful household products. The thunder of those looms was deafening, and by state law, we were required to wear ear plugs. In my grandfather’s day, no such laws were in place, so consequently, he lost much of his hearing after years spent crawling under dirty looms to fix them for over-anxious weavers. With ear plugs, the only noise you hear is the sound of your own voice as you talk to yourself for an entire eight-hour shift. You ask yourself questions, and you give yourself answers. You hear the voices of others in your mind, reminding you what you’ve always thought to be true. You cry, you pray, you sing. You wait. You listen. And then you surprisingly hear the sound of cotton — a holy silence — the voice of your own soul, or God, telling you who you are and how you fit into the deafening world of insecurity all around you. Some religions refer to this sound as Om; others call it a still, small voice. It’s a sound that I may never have heard if I had not grown up in a cotton mill town and worked on the third shift through so many interminable nights during my high school summers. It’s a sound that you’ll only hear a few times in your life, if you’re lucky, and only when you need to hear it. But when you do, you’ll understand.

The mill may be gone, but the sound of cotton can still be heard. I hope I’ve taught all my students how to hear it.

Editorial: A time for solidarity, and change

It’s hard to come up with words adequate to condemn the slaughter Sunday morning of 49 people at a gay... read more