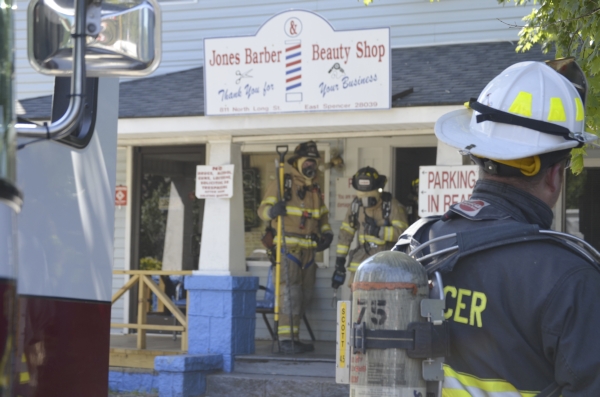 EAST SPENCER — Four people were displaced Tuesday after a fire damaged an apartment and water damaged another located behind Jones Barber & Beauty Shop, 811 N. Long St., across from Citgo.

The fire was called in just after 4 p.m. from the business with someone saying they saw fire coming from one of the apartments.

Acting Fire Chief Josh Smith said the fire began in a breaker panel. The electrical fire was related to a ground wire connection. The fire spread into the wall and into the ceiling and was contained to that one apartment. The second apartment had water and smoke damage.

Smith said none of the tenants can return to their apartments until Duke Energy representatives check and address the wiring in the building.There were some people inside the barber shop, which was evacuated.

One firefighter was treated at the scene by Rowan EMS for heat exhaustion.

No other injuries were reported and no tenants were home at the time of the fire, confirmed East Spencer Police Chief Sharon Hovis.

The Red Cross is assisting a couple and child from one apartment and a woman in another apartment, said disaster program specialist Heather LeMaster.

In Salisbury Police reports: • A woman reported Saturday a larceny occurred in the 1100 block of Old Plank Road.... read more