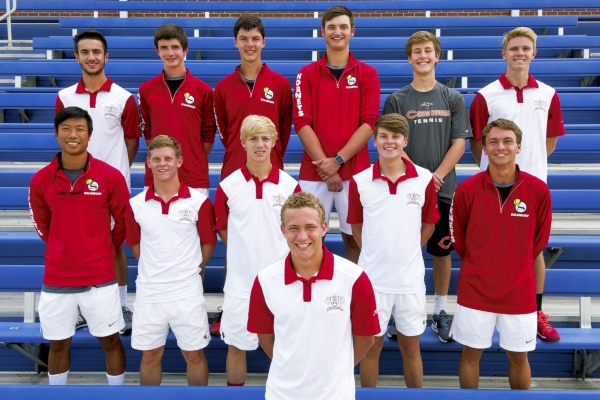 SALISBURY — Officially, he’s James Isaiah Emerson, but the Rowan County Tennis Player of the Year is known simply as “Ike.”
Besides being the South Piedmont Conference Tennis Player of the Year, Emerson competed in swimming and cross country for the Mustangs. He’s an Eagle Scout, All-Rowan County scholar and co-president of the East Rowan National Honor Society, so he’d get votes as the county’s teenager of the year.
Tennis is part of what makes Emerson tick, but he uses his brain more than his brawn. He’s studied diligently for the ultimate, full-ride college scholarship — an appointment to the United States Military Academy at West Point. His career goal is to become an Army doctor.
Emerson lost his father in January.
Dr. James Emerson, who died at 76, lived an amazing, double-barreled life as both an educator and Army major general. Ike, like his father, generates equal portions of love and respect. His classmates gave him a standing ovation at the senior awards ceremony.
Emerson didn’t take up tennis seriously until the summer after he finished the seventh grade at Erwin Middle School, but he learned that the sport suited his natural athletic gifts, his temperament and his competitive nature.
He’s been a sound, steady player since his freshman year and helped East go undefeated in conference play four straight seasons — three times in the SPC and once in the North Piedmont Conference. The team accomplishments are what he’s proudest of about his high school career.
“We met our goals and all of our expectations as a team,” Emerson said. “We were able to four-peat not only as conference championships — but as undefeated conference champions. The seniors didn’t lose a conference game in our careers. I’ll remember that.”
Emerson, who lost once in his 26 singles and doubles matches in the regular season, spearheaded an exceptional team. East went 13-0 in the regular season and most of the Mustangs didn’t drop a singles match until they encountered eventual 3A state champ Marvin Ridge in the second round of the state playoffs.
“Marvin Ridge has great players and they knocked us out of the playoffs three straight years,” Emerson said. “It was a bad draw to get them in the second round this year.”
East’s athletic No. 2 player Chance Brown, small but quick, may be as good in as many sports as anyone in the county. He excels in track, swimming and cross country, as well as tennis. He and Emerson were perfect at No. 1 doubles in the regular season, and Brown also won all his regular-season singles matches.
East’s No. 3-6 players – junior Robert Gray, seniors Addison Fry and Nikolas Pillsbury and junior Zakk Perdue — dominated opponents in doubles and singles and also are on the 12-man all-county team. All the Mustangs wore the “JWE” initials on their sleeve to honor Emerson’s late father, and East played with a purpose in every SPC match, determined to get the four-peat.
At the 2A level, Salisbury had a year virtually identical to East’s.
The Hornets also ran the table in the regular season and also were eliminated in the second round of the playoffs. Salisbury, which has won seven straight outright CCC titles, ran into perennial state finalist Brevard earlier in the bracket than usual.
Salisbury’s top five — seniors Spencer Storey, Mars Hill signee Hunter Carlton, David Derrick, Matt Sukkasem and freshman Roarke Burton — were named to the all-county team.
Salisbury’s young sixth and seventh men (freshman William McGee played No. 6 singles, while sophomore Adam Drye teamed with Burton at No. 3 doubles) also had outstanding seasons and have great years ahead of them.
Storey, the Central Carolina Player of the Year, and Derrick took their season to the limit, finishing as the state runner-up in the 2A individual doubles.
The only member of the all-county team not from East or Salisbury is Carson’s No. 1 player Graham Purcell, a regional qualifier.
Purcell had a pivotal role in determining the county player of the year. He won a close match against Storey when Carson played the Hornets, but he lost to Emerson, 6-0, 6-2, when Carson played the Mustangs.
Salisbury and East didn’t meet, but those two results involving Purcell made Emerson the logical choice as player of the year.
Nine of the 12 all-county players are seniors. Burton will return to lead the Hornets, while Gray, who rebounded from a serious knee injury, and Perdue will be back for the Mustangs.
Emerson said there’s a common factor linking the strong senior classes at East and Salisbury.
“About all of us took lessons from Bobby Cristman at City Park,” Emerson said. “Bobby deserves a lot of credit for the success of both teams.”
East’s Jon Heidrick, who replaced two starters and kept the program rolling, is the Rowan County Coach of the Year. He also won the SPC accolade.

By Mike London mike.london@salisburypost.com SALISBURY — West Rowan sprinter J.T. Sanders is the choice for athlete of the year for... read more