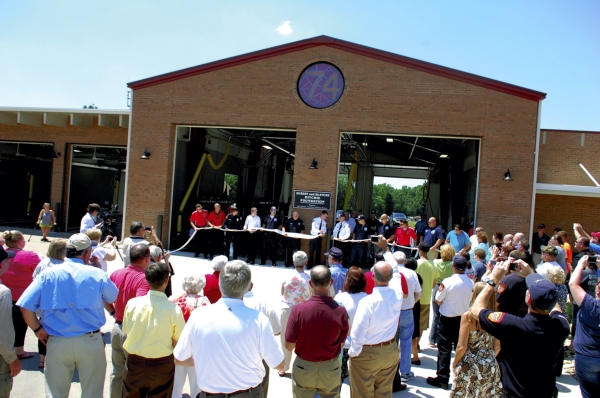 Mark Wineka/Salisbury Post South Salisbury firefighters participate in the uncoupling of a hose, a tradition similar to a ribbon-cutting to mark Sunday's dedication of the fire department's new 7,138-square-foot addition, largely made possible by a $300,000 gift from the Hubert & Blanche Ritchie Foundation.

SALISBURY — Instead of cutting a ribbon, the firefighter way of dedicating a new facility is to uncouple a hose.

So that’s what the South Salisbury Fire Department did several times Sunday afternoon in christening the $1.75 million addition to its station on Old Concord Road.

Bolstered by a $300,000 gift from the Hubert & Blanche Ritchie Foundation, the addition extends the station by 7,138 square feet and effectively enlarges the total station by about two-thirds.

The construction cost was $1.43 million, not counting $320,000 in new furnishings that have been added.

To put it in perspective, when South Salisbury built the old station and paid for the land in 1976, the total cost was $76,850. The 1976 portion of the station, which was renovated significantly as part of the project, covers 4,316 square feet, so the total footprint of today’s updated station is 11,454 square feet.

“We did a lot of brainstorming in the beginning, and we feel our dreams, with the help of a few people along the way … provided us with a state-of-the-art facility our community and members will be proud of for years to come,” Assistant Chief Jason Burnett said.

Sunday’s dedication also included an open house during which residents could tour the station.

Edds called it a great day for Rowan County and South Salisbury. He said he is always struck by the high character of men and women in firefighting, law enforcement and emergency services and has a feeling of patriotism when he’s around those communities.

“It’s a huge honor for us to be here in this new facility,” Edds said.

Burnett, who oversaw much of the project from the South Salisbury side of things, handed out individual plaques of appreciation to the three trustees of the Ritchie Foundation — Barbara Brown, Don Menius and Tim Ervin.

The late Hubert Ritchie was a board member and big supporter of the fire department.

The foundation’s $300,000 contribution will be doled out over four years and will cover the first four yearly payments on the loan for the project.

Burnett also gave plaques of thanks to Mike Vanhoy, Bob Rawson and Todd Smith, who were key representatives of the project’s contractor, D.R. Reynolds Co. Inc.

The department needed more space for equipment. In the next couple of years, it is planning to replace a front-line engine company because the current unit turns 20 years old this month.

Come July 1, the department is expanding its part-time staffing program so the station can be covered around the clock.

Personnel will be working 12-hour shifts, Burnett said. “In addition, we will be expanding our coverage times for our part-time staffing during the weekdays as well,” he added. “So our station couldn’t have come at a better time.”

South Salisbury actually housed that kind of program from 1966-79.

South Salisbury is celebrating its 65th anniversary this year. Burnett said the addition will rely on long-term financing. Annual payments will come from the operating budget and the foundation’s gift.

There has been no increase in the district’s fire tax — “a rare feat based on the amount financed,” Burnett said.

Here are some of the things the $1.75 million project accomplished:

• The addition of 42 parking space and a wrap-around driveway to incorporate drive-through bays.

• The expansion of apparatus/vehicle storage from four to eight pieces of equipment.

• Addition of a bigger training/multi-purpose room.

• Addition of three individual sleeping rooms that can sleep up to 10 employees.

• Addition of a conference/small meeting room.

• Addition of a dayroom.

• Addition of an exercise room.

• Addition of a larger kitchen.

• Addition of two new offices and the relocation of a third.

• Addition of a decontamination room.

• Wireless internet and a facility-wide paging and alert system for incident notifications.

Cory Orbison is chief of South Salisbury. Gary Gaskey serves as president of the board.