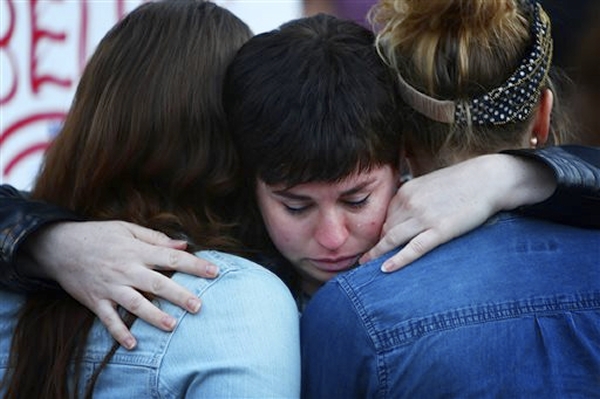 People embrace at a vigil in Seattle for the victims of a mass shooting at Pulse nightclub in Orlando, Fla. AP photo

Reaction: ‘We condemn this attack’

Reaction to the Florida mass shooting at the Pulse Orlando nightclub early Sunday when police say a gunman identified as Omar Mateen opened fire with an assault-type rifle, killing at least 50 people and wounding dozens of others:

“We condemn this monstrous attack and offer our heartfelt condolences to the families and loved ones of all those killed or injured. The Muslim community joins our fellow Americans in repudiating anyone or any group that would claim to justify or excuse such an appalling act of violence.”

“We are heartbroken and angry that senseless violence has once again destroyed lives in our state and in our country. Gay clubs hold a significant place in LGBTQ history. They were often the only safe gathering place and this horrific act strikes directly at our sense of safety.”

“Let this hateful act of terror of the #LGBTQ community be a wake up call for America. Men and women of all races, ages, and sexual orientation are being slaughtered because of hate crimes. How many more must die from a hate crime? We need to create awareness to ALL that hate is not the foundation of our nation. Friends DO NOT let this coward put fear into your hearts!!!”

Michael Sam, the first openly gay player in NFL history, in an essay on Instagram.

“My thoughts & prayers go out to my Orlando LGBT community brothers and sister during this senseless act of violence. Love is Love!”

“This morning, I will be marching in the West Hollywood Pride Parade with a heavy heart, but we will march in solidarity with all those who are the victims of terrorism and hatred.”

“Now, as the investigation begins, comes the inevitable politicization of tragedy and the familiar flood of questions. Mateen, 29, was a licensed security officer and had been on the FBI’s radar. Shouldn’t those two things be mutually exclusive? And how does a man on FBI radar purchase killing machines — an assault rifle and a handgun — legally?”

— From a USA Today editorial

“Today marks the most deadly shooting in American history. The shooter was apparently armed with a handgun and a powerful assault rifle. This massacre is therefore a further reminder of how easy it is for someone to get their hands on a weapon that lets them shoot people in a school, or in a house of worship, or a movie theater, or in a nightclub. And we have to decide if that’s the kind of country we want to be. And to actively do nothing is a decision as well.”

“It’s horrific, it’s unthinkable. And just hopes go out to all those who were shot that they can recover.”

“Horrific incident in FL. Praying for all the victims & their families. When will this stop? When will we get tough, smart & vigilant?”

“Woke up to hear the devastating news from FL. As we wait for more information, my thoughts are with those affected by this horrific act.”

“Pope Francis joins the families of the victims and all of the injured in prayer and in compassion. Sharing in their indescribable suffering he entrusts them to the Lord so they may find comfort. We all hope that ways may be found, as soon as possible, to effectively identify and contrast the causes of such terrible and absurd violence which so deeply upsets the desire for peace of the American people and of the whole of humanity.”

Statement from the Rev. Federico Lombardi, director of the Holy See press office.

“Our practices and institutions may change in light of this tragedy — LGBT gathering places may have more security now. But we will never, ever go away. We will never be cowed.”

“The Secretary-General condemns the horrific attack this morning in Orlando, Florida, in which dozens of people were killed and injured. He extends his deepest condolences to the families of the victims and expresses his solidarity with the Government and people of the United States.”

“Please keep everyone in your prayers as we work through this tragic event. Thank you for your thoughts and love.”

French President Francois Hollande “condemns with horror” the mass killing in Florida and “expresses the full support of France and the French with America’s authorities and its people in this difficult time.”

“My thoughts go out to the victims, to which I offer my condolences, as well as the many wounded, to whom I wish a speedy recovery. I express my solidarity to the American people and its authorities in this terrible ordeal.”

“Our heart is with our American brothers.”

“aghast by the ever more dramatic news of the nightclub massacre.” Tweet from Italy’s foreign minister, Paolo Gentiloni.

___ “Please keep everyone in your prayers as we work through this tragic event. Thank you for your thoughts and love.” Pulse Orlando on its Facebook page.

“Our thoughts and prayers are with the victims, families and all those affected by this horrific tragedy. We are a strong and resilient state and we will devote every resource available to assist with the shooting in Orlando.” Gov. Rick Scott.

My Turn: More pie in the sky

By Larry Bowyer The Salisbury City Council’s ideas about appropriate zoning changes are, to say the least, arbitrary. At the... read more