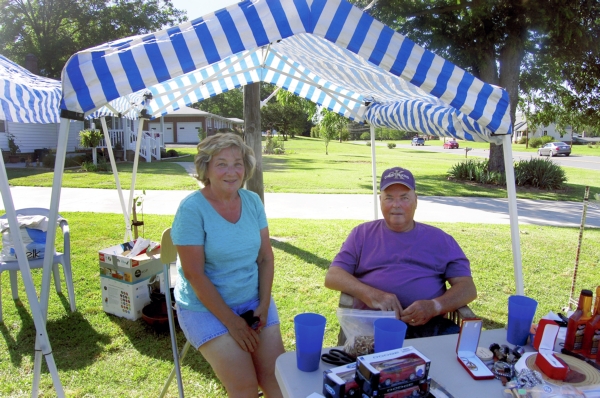 Amanda Raymond/Salisbury Post Jotty and Bobby Leazer have been holding a garage sale for a week so far, and they still have plenty to sell. They are both retired and use garage sales to make some money and occupy their days.

The Dart: Couple’s garage sales a moneymaker and hobby

SALISBURY — Bobby and Jotty Leazer host garage sales. They sit under a tent from 7 a.m. to about 6 p.m. as people come and go, browsing through antiques, books and lamps on tables set up on the Leazers’ lawn on Bringle Ferry Road. Jotty gets up to greet people and give prices, going back over to Bobby when she needs change.

“It’s to make money for me,” Bobby said.

Bobby has been a collector for his whole life. Now that he and Jotty are retired, they decided to start selling the collection. The collection was housed in a shed next to the Leazers’ garage and they had to clear it out before they could pour in a cement floor.

“Then I can start (collecting) all over again,” Bobby said.

The Leazers had been running the garage sale for a week straight as of last Wednesday. They usually sell for about two or three days at a time, so this is the longest string of consecutive days that they have held the garage sale.

There were about 10 fold-out tables filled with collectors glass, toys, books, antiques, baskets, Christmas items, kitchen items, lamps and pitchers. Earlier in the day they sold a bicycle and television stand. They even sold a tractor, which they no longer needed because Bobby does not do much yard work these days.

Though from Salisbury, Bobby moved to Seattle, Wash., for a job. He eventually moved back to Salisbury to be closer to his family.

“Who would think in my 60s I’d be in North Carolina,” Jotty said.

Bobby also worked as a welder building bridges in Tennessee. While there, the workers called the power company to reroute the power so that they could work. They were told the power was rerouted, but it wasn’t.

Bobby touched a piece of equipment and 44,000 volts of electricity went through his body.

Bobby said he had an out of body experience when it happened. He could see himself lying on the ground. He drifted up towards outer space and saw “stars … bigger than hubcaps” and unbelievably vibrant colors all around him.

Bobby felt a hand on his right shoulder and heard God’s voice say he was looking at God’s universe.

Bobby remembers a scent catching his attention and he asked God about it. He said God told him the scent was the prayers being said for Bobby.

Bobby was sent back to Earth unwillingly. He said the men who dragged him away from the equipment heard him saying, “No, no, no.”

“I look forward to dying,” Bobby said. “I know where I’m going.”

Bobby had to have skin grafts and muscle and nerve replacements. He said he received so many cards that he ran out of room to display them on the window sill next to his bed.

Bobby almost made the Guinness World Records for being electrocuted with that much electricity and surviving, but someone beat his record on the same night the Guinness representatives asked him if he wanted to be featured.

He likes to tell his story about being electrocuted to people at the garage sales. He also witnesses to people about his Christian faith.

Although the Leazers moved to Salisbury three years ago, Jotty is still getting used to the Southern life. She said people are friendlier here, but one thing she doesn’t understand is people saying “hey” when greeting one another. To Jotty, that word is the “first stage of manure.”

She has Bobby to teach her the ways of Southern living.

Bobby said he will continue collecting things when he can. He said some people ask why he wants to purchase certain items, but Bobby knows there are people interested in all sorts of things.

The garage sales give the Leazers something to do while they enjoy retirement, and they like meeting neighbors and hearing the surprise in their voices when they tell them the low price of different items.

They also sell pecans and are now selling their chickens to make some extra money for a trip to the Outer Banks.

“If we sat in the house looking at each other,” Jotty started, “We wouldn’t last long,” Bobby finished. And they both laughed.

By Amanda Raymond amanda.raymond@salisburypost.com SALISBURY — Steve Sherriff started working for Durafiber Technologies on June 1, 1976. Back then, the... read more