Young authors: students get to write, publish own books 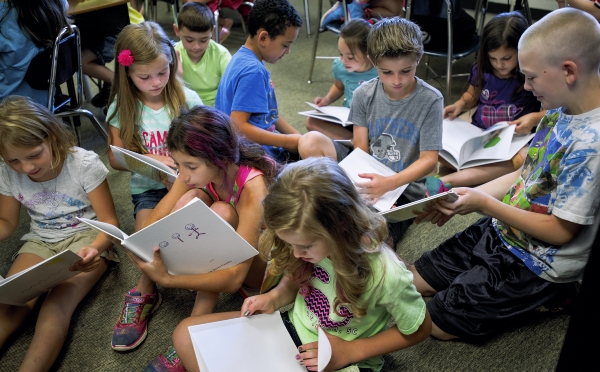 CHINA GROVE — Katie Efird’s Bostian Elementary fourth grade class is bubbling with excitement. Each child holds a pristine white hardcover book, and many eagerly flip through the pages. At one table, the students trade books, passing them around in a circle as they coo over the covers – each one features the name of a different classmate.

The books, each written and illustrated by a student, are the product of a pilot program known as Lulu, Jr.

Andrew Smith, director of innovation at Rowan-Salisbury Schools, said that the district was one of only two in the country chosen to pilot and beta test the program, which encourages children to write, and places a bound copy of their story in their hands.

“They get to be authors at a very young age,” he said.

The project is a product of My Awesome Publishing Company — a partnership between Lulu, Jr. and FableVision Learning. For a “nominal” cost to the system, the opportunity to write and publish his or her own story was extended to every elementary school student in the district. Smith estimated that nearly 2,500 Rowan-Salisbury students participated in the tech-based program.

But beta testing an app can be frustrating, Smith said, and he felt that teachers were used to working with apps that had been through multiple production cycles – not ones where there were still numerous bugs to be ironed out. Teachers cited problems with saving work, and Smith said he’d gotten complaints about a lack of features. Students also reported that they spent several weeks chipping away at their Lulu books.

But for many teachers, the project opened wide horizons.

“It used to be like pulling teeth getting them to write,” Efird said.

Teachers had free range to incorporate the program as they saw fit. Efird said it fit nicely with her lessons on literacy, and was a good culminating project for studying narration and the ways stories rise and fall.

Her students dreamt up their own stories, sketched out a storyboard on paper and put it into the program. The fourth graders begged to work on it every day. Efird also assigned editing as homework, pulling in parents and family members to help proofread.

Joel Reyes, a fifth grader at Bostian, said his teacher incorporated the project into one of her 20-minute centers.

Reyes said the book helped him with his reading and writing skills. In ten pages, Reyes tells the story of a giant who gets a bad grade at school and goes to Charlotte to climb skyscrapers.

Tara Velardi, reading design coach at Bostian, said that Lulu really “got the boys on board” when it came to reading and writing. Whether it’s due to a lack of interest in the topics, or another issue, when it comes to literacy Velardi said boys can often be a “tough customer.”

But they weren’t with Lulu – Velardi said it may have been due to the technology component of the program, or to the freedom they were given to dream up their own stories without limit.

“They were able to write about that and not feel that someone wasn’t going to take their writing seriously,” she said.

“I never would have done this before,” second grader William Davis said.

Some classes did not finish writing their books due to time constraints, and were given the option of continuing the project in the next school year.

“I think the biggest success is their enthusiasm for writing,” Efird said.