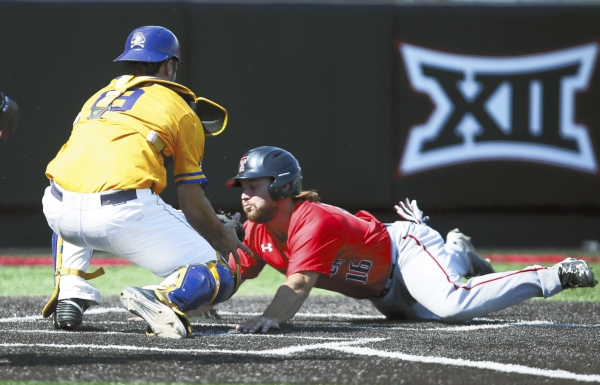 LUBBOCK, Texas (AP) — Eric Gutierrez singled in two runs in the top of the 13th inning and Texas Tech beat East Carolina 3-1 on Saturday night to even the Lubbock Super Regional at a game apiece.

The Game 3 winner Sunday will advance to the College World Series in Omaha, Nebraska.

Gutierrez, the 2016 Big 12 Player of the Year, ended an 0-for-16 spell that dated to the second game of the Lubbock Regional last week. He was 0 for 9 against ECU before his single in extra innings.

“I mean, I have confidence in myself and obviously the team has it, too,” Gutierrez said. “Just because I was 0 for 16, to me it doesn’t matter. Just go up to the plate and battle and grind it out.”

Texas Tech relief pitcher Robert Dugger completed his longest outing of the season after coming on in the eighth inning with two runners on base and no outs. He retired 15 of the next 18 batters through five innings of work while striking out a career-high five.

The Pirates’ biggest threat came in the bottom of the 12th with the bases loaded and two outs. But Dugger once again found a way out, getting Brady Lloyd to ground out to second base for the fielder’s choice.

Texas Tech turned four double plays — its most during the postseason.

“At any level of championship baseball you need to turn double plays,” Texas Tech coach Tim Tadlock said. “The teams that do get to keep playing. A lot of times you see that when you don’t turn one, it ends up hurting you. Fortunately today, those balls went to us and we were able to turn them.”

The Red Raiders appeared to have the winning run headed home in the top of the ninth after Tanner Gardner’s liner was tipped into right field by first baseman Bryce Harman. But Harman recovered and his throw home was ruled in time to get Tyler Floyd out at the plate and keep it tied 1-1.

Texas Tech broke it open in the fourth inning when Tyler Neslony doubled down the right field line and then scored two batters later off an errant throw to first.

East Carolina evened it in the sixth on a sacrifice fly by Travis Watkins — his seventh RBI of the series.