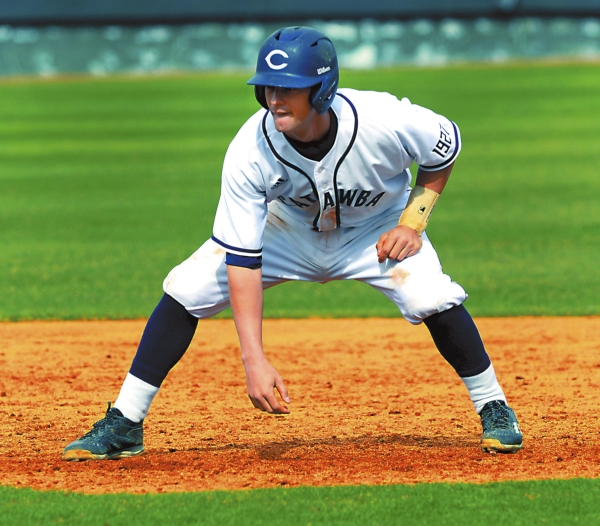 Wayne Hinshaw file photo/for the Salisbury Post ... Will Albertson, Catawba’s slugging catcher, was drafted Saturday in the major league baseball draft by the San Francisco Giants. Albertson was taken in the 21st round.

SALISBURY — The San Francisco Giants had an all-star player named Will Clark in the late 1980s and early 1990s, and maybe they’ve drafted another
Will who can hit.
Will Albertson had just walked outside Cabarrus Arena after Cox Mill High’s graduation on Saturday — his girlfriend’s brother was graduating — when he found out he’d been chosen by the Giants in the 21st round.
The first clue came from Catawba teammate Michael Elwell.
“Elwell sent me a text with his congrats,” Albertson said. “Then I checked out the draft on my phone. Then I started getting messages from a lot of people.”
Albertson transferred from NCAA Division I Campbell, so his career at Catawba only lasted two seasons. But he put up insane career numbers in his 117 games — 41 homers, 150 RBIs and a .437 batting average. His on-base percentages for his two seasons were .531 and .494, which made him the Ted Williams of Division II. He reached base by walks or HBPs 81 times while striking out 40 times.
In other words, the right-handed hitting catcher/outfielder was a tremendous offensive force for the Indians. Great patience. Consistent contact. Serious power in clutch situations.
“It was tough for him to do this year what he did last year because he was getting intentionally walked in the second and third inning,” Catawba coach Jim Gantt said. “I guess that’s why he only batted a quiet .404. There was a lot of respect.”
The New York Yankees drafted Albertson in the 40th round last June but never made him an offer. So Albertson returned to Catawba for his senior year and made the most of his encore on the field and in the classroom. Now he’s one internship away from a degree in recreation that he said he can take care of in about three weeks in the offseason.
Albertson also came a long way in the last year with his catching — throwing out runners, blocking pitches in the dirt, calling a game and settling down pitchers.
“I don’t think there were that many questions about my bat after my junior year and I used this year to refine things behind the plate, sharpened my skills a lot,” Albertson said.
He also had a chance to be the team leader as a senior, and he proved good at that, too. It was calm, by-example leadership, but his teammates appreciated that he showed up for every scheduled game of his career and consistently beat the heck out of baseballs. Usually players as good as Albertson inspire some jealousy, but it would be hard to find a teammate who didn’t admire him and like him.
“You won’t find a better person and you won’t find a better family,” Gantt said. “With Will, just like it was with Craig Brooks (a 7th-round pick by the Chicago Cubs in 2015) … it was always about us, never about them. They were great team players.”
If you’re wondering how Albertson lasted until the 21st round, there are always doubts about D-II players, even though Catawba’s South Atlantic Conference rivals Tusculum, Lenoir-Rhyne, Wingate and Mars Hill also had players picked in the draft.
The other questions about Albertson have to do with his size. Albertson is 5-foot-11 and weighs about 180 pounds. He has a chance to be a special offensive player if he can handle catching duties in the pro ranks, but his bat becomes less special if he moves to the outfield.
“With a guy Will’s size they’re always going to be concerns about his durability as a catcher and the wear and tear,” Gantt said. “All I know is he took his share of foul tips, and he never missed a game. He’s physically fit. There’s no body fat on him. He’ll handle the rigors of catching.”
Albertson’s fallback position will be left or right field. His arm is good. His speed is surprising. He’s run a solid 6.8 in the 60-yard dash. That means his wheels are average for a major league outfielder.
Albertson was aware the Giants liked him a lot and might pull the trigger. Area scout Donnie Suttles had talked to Albertson about two weeks ago, and Suttles had also spoken with Gantt at the USA Training Center in Cary during the Division II World Series.
“Suttles told me the Giants wanted to take Will in rounds 20 to 24, and that’s where they got him,” Gantt said.
Albertson has exhausted his college eligibility, so signing a pro contract is a formality that’s probably going to happen in the next few days. There’s not a lot to negotiate, and for Albertson, a native of the Randolph County hamlet of Sophia, it’s all about the opportunity to play pro ball. That’s been the dream since the first time he picked up a bat.
The Giants, who have been in 20 World Series — that’s second only to the Yankees — will have two teams starting play soon in “short season” leagues.
Their lowest-level team is in the Arizona Rookie League, while the next step up the ladder is in Oregon with the Northwest League’s Salem-Keizer Volcanoes. Oregon offers more pleasant temperatures than Arizona, but Albertson may start out catching in the heat.
“I’ve talked to Brooks about it,” Albertson said. “Last year he started in Arizona, and the Cubs moved him up to Oregon pretty quickly. He said the climate change was amazing.”
A goal for Albertson, who will turn 22 in a few weeks, will be to make the roster of the Augusta GreenJackets coming out of Spring Training next year. That would put him in the full-season Class A South Atlantic League.
“That would mean playing games in places like Greensboro and Kannapolis that are close to home,” Albertson said. “That’s something to shoot for.”