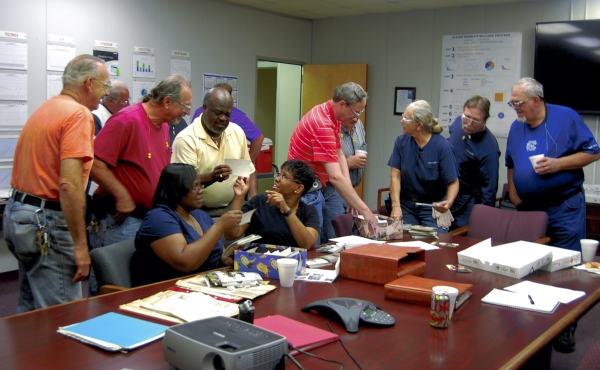 Amanda Raymond/Salisbury Post DuraFiber Technologies, at 7401 Statesville Blvd., is celebrating 50 years this year. Employee Steve Sherriff invited long-time employees to look at old pictures and clippings that have been collected over the years.

SALISBURY — Steve Sherriff started working for Durafiber Technologies on June 1, 1976. Back then, the company was known as Fiber Industries Incorporated.

Sherriff was transferred to a research facility in Charlotte for nine years, and then came back to the Salisbury facility. He has been a researcher, development engineer, productivity engineer and has held many other titles.

He has spent the last 15 years working in technical service for customers.

He is proud to be the third generation in his family to work in the textile business, but he laughed when he said there would not be a fourth.

Sherriff had just earned his MBA when he started at the company, and said one thing he remembers from business school is someone telling him that if he wakes up and hates his job three days out of the week, do something else.

“That ain’t happened yet,” he said.

To celebrate Durafiber Technologies’ 50th anniversary, Sherriff invited long-time employees to a drop-in session where they could eat doughnuts, drink coffee, look at old pictures and reminisce on the old days.

According to its website, durafibertech.com, Durafiber Technologies is a leader in polyester fibers and fabrics production for industrial and tire reinforcement uses. Some of those uses include reinforcement for conveyor belts, hoses, single ply roofing, tents, automotive airbags, seat belts, safety harnesses and ropes.

More recently, the facility belonged to INVISTA starting in 2004. Two years later, INVISTA sold its polyester tire, technical filament business and assets, which included the Salisbury facility, to Performance Fibers Inc., and the facility was renamed to Performance Fibers Operations. It was renamed Durafiber Technologies in 2014 when the name was sold to the Kaiping facility.

Sherriff said the number of employees has ebbed and flowed over the years — in its heyday, the company had around 3,000 employees. These days, it is down to about 300.

Darcell Mangan, a human relations journalist, said she remembers how amazed she was at how big the facility was and how many cars were in the parking lot when she started with the company in 1972.

She said the company has learned to be more efficient with a smaller amount of people.

Mangan said one thing that has stayed the same throughout the years was an emphasis on employee safety.

“We still try to keep employees as our No. 1 emphasis,” she said.

Mike Raney, a maintenance manager, said the number of employees is the most striking difference the company has encountered.

He said when he started 40 years ago, people were everywhere.

“Now, sometimes you walk up and down the hallway and you don’t see anyone for a while,” he said.

Raney said the company used to have a recreation club about 10 years ago. They played softball and basketball, and had enough people in the company to form multiple teams and play against each other.

Van Oliver, a day operator, has worked for the company since 1976.

He said there has always been a family atmosphere in the company.

The get-together Sherriff planned felt a little like a family gathering around old photo albums.

Employees went through boxes filled with pictures of the old days and flipped through clippings and pictures in albums. They laughed at the younger versions of themselves and were reminded of previous employees and managers.

Bobby Couch, an environmental health and safety emergency response team coordinator, started at the company in August of 1974.

“I just couldn’t believe how big the plant was,” he said.

He, his brother and his father worked the same shift at the company at the same time. They would carpool all the time.

Couch and other employees at the gathering agreed that although the hard work of the management teams was important, the dedication of the employees helped keep the company going.

“I think that dedication has kept us alive,” he said.