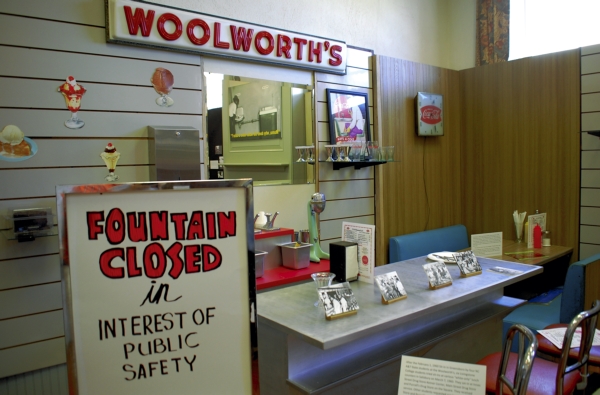 Mark Wineka/Salisbury Post The Rowan Museum's re-creation of a typical Woolworth's lunch counter from the 1960s, where many civil rights sit-ins would occur during an age when blacks were refused service. Several of the items are from the Salisbury Woolworth's which was on Main Street.

'Mama, Why Does the Water Have a Color?'

When; 1-4 p.m. today, with refreshments in the Messinger Room. The exhibit lasts until Dec. 17.

“History, despite its wrenching pain, cannot be unlived, but if faced with courage, need not be lived again.”  — Maya Angelou

The days of segregation were not pretty, especially when you view it from the daily perspective of attending school, eating at restaurants, riding buses, going to movie theaters or even taking a drink or using public bathrooms.

To its credit, the museum brings those discriminatory practices alive through things such as a re-created Woolworth’s lunch counter, where in Salisbury — and more famously in Greensboro —  blacks who were refused service would stage sit-ins.

There’s a bus seat, to reflect the times when blacks were forced to ride at the rear of public transportation buses. There are water fountains, side by side, but one labeled “white”; the other “colored.”

Just seeing these kinds of things again — or for the first time — drives home the point that equality is an integral part of freedom and how easily both can be denied through laws or just looking the other way.

The exhibit’s name, “Mama, Why Does the Water Have a Color?” comes from a question Terry Holt, then a youngster, posed to his mother in a local store. He saw a girl reprimanded for being on the “colored” water fountain, and he asked his mother why the water had a color.

“It just does,” his mother answered.

It’s the reason why Holt, chairman of the museum’s exhibits committee and board president, has placed several cards throughout the main exhibit room that simply pose the question “Why.”

“You leave with your own impressions,” Holt says.

Holt says there was never any debate about whether to include artifacts and information related to the Ku Klux Klan, which was openly active in this area.

“No, we had to include the ‘other voices,'” Holt said.

It would be difficult to ignore that this area was once labeled “Klansville, USA,” in both a book and film documentary, or that North Carolina’s grand dragon of the KKK lived in Granite Quarry, Holt said.

One of the largest Klan rallies in the Southeast occurred a quarter-mile from his home when he was in the eighth grade, Holt said, and he recalled riding by days later and smelling the kerosene used to burn crosses in the field.

“You need to keep telling the story,” Holt said, recognizing how it would have been easier to ignore the civil rights story altogether. “It’s a past that needs to be remembered. … We finally came to the conclusion (as a people) we should not treat each other like this.”

The back entrance area and the main exhibit room on the first floor are dedicated to “Mama, Why Does the Water Have a Color?” The back portion focuses on segregated schools of the day, and it has room to accept many more items during the life of the exhibit, which will last until Dec. 17.

“We didn’t come out deliberately and say, ‘Rowan County dragged its feet (during integration),’ but we did,” Holt said.

Reginald Brown, a black historian in Salisbury, helped with research for the exhibit. He remembers when Holt first suggested a civil rights exhibit, which would not pull punches.

“When Terry first came up with the idea,” Brown said, “I thought I would get my passport renewed, in case I had to leave and come back later.”

When he heard Holt’s title question for the exhibit, Brown said, “Do you really want to know? I can tell you why the water has color.”

There are many uncomfortable artifacts on display, such as Klan business cards, posters and members’ magazines and newsletters.

One corner is devoted to the story of 16 Livingstone College students who were jailed for trespassing in Salisbury after they tried to integrate the Capitol movie theater March 1, 1962.

As he looked on the re-created Woolworth’s lunch counter and an eating booth nearby, Brown said the idea of drive-through windows for restaurants probably came from the days of segregation — when blacks could not eat inside white establishments, but would be served from windows or back doors.

And Brown laughed, retelling the story of a friend who used to work at Phil’s Shoes, who could tell who was under a Klan robe by the shoes peeking out from the bottom.

Executive Director Aaron Kepley has interviewed five local residents about their memories from the civil rights era, and he would like to interview more — whites and blacks. Parts of those interviews will be available for museum visitors to hear through iPads.

The exhibit has received a lot of community support, Holt says, and many people contributed their skills and talents.

Several of the items making up the Woolworth’s display are from the Salisbury store, including the booth, stools and sign. Most belong to the Rowan Museum collection, though the stools are on loan from the N.C. Museum of History.

1. Salisbury’s new police chief, Jerome Stokes, was deputy chief in a city outside of North Carolina. Where is he... read more