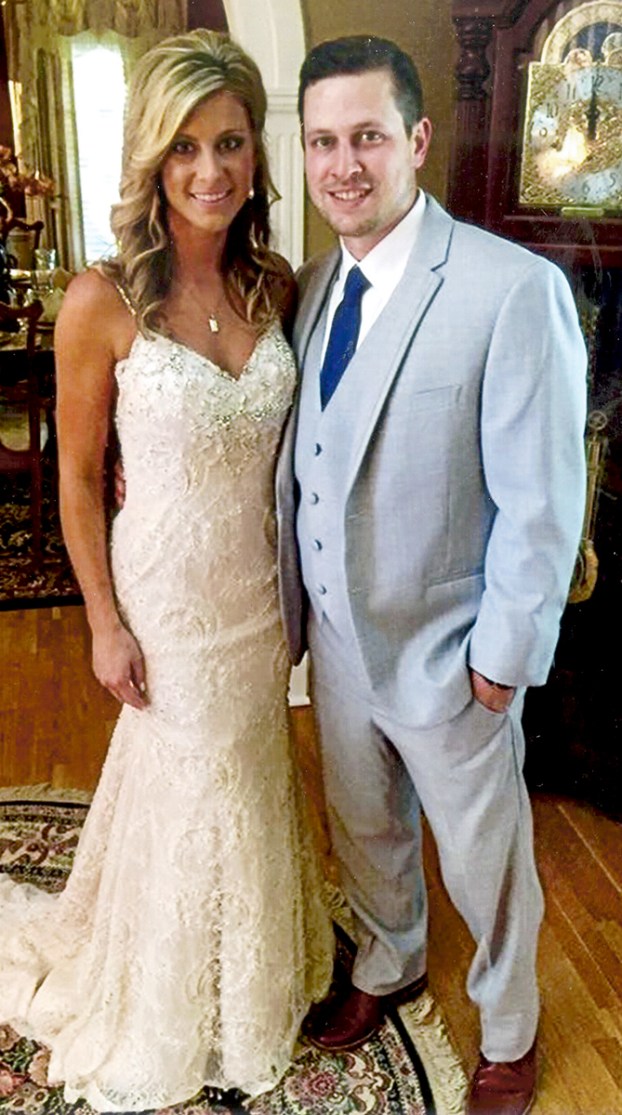 Miss Megan Michelle Bridges and Mr. Roger Burton “Bubba” Morris were united in marriage on Saturday, May 21, 2016 at 5:30 p.m. at The Saratoga Springs, Mt. Pleasant. The ceremony was officiated by Dr. Kenneth Lance, Senior Pastor, First Baptist Church of Salisbury. Cousins of the bride, Barbara Beam and Beth Young, provided ceremonial music for the wedding. Henderson Lentz was the scripture reader.
Immediately following the ceremony, parents of the bride hosted a reception at The Saratoga Springs.
The bride was given in marriage by her father, Mr. Randy Abernathy, and her grandfather, Mr. Glenn Anthony. Sister of the bride, Mrs. Audra Boyd, of Charlotte, served as her matron of honor. Bridesmaids included Miss Drew Morris, sister of the groom, of Salisbury; Miss Samantha Black of Shelby; Miss Kaci Thornburg and Mrs. Meggan Harrelson of Cherryville; Miss Rose Nguyen of Huntersville; Miss Kristen DaCanal of Atlanta, Ga.; and Mrs. Lindsey Beasley.
Mr. Floyd M. Burton, grandfather of the groom, of Salisbury, served as honorary best man; Mr. Johnny Morris, father of the groom, of Spencer and Mr. Craig Beasley, of Salisbury, were best men. Groomsmen included Mr. Kiel Jarrett and Mr. James House of Salisbury; Mr. David Thomas of Lexington; Mr. Jason Barnett of Mt. Ulla; Mr. David Trenor of Cleveland; and Mr. Clay Watson of Mooresville.
Salem Thomas of Lexington served as flower girl and Waylon Jarrett of Salisbury served as ring bearer. Carla Holt, aunt of the bride, and Bo Monroe, aunt of the groom, were guest registrars and greeters.
The bride is the daughter of Randy and Dana Abernathy of Cherryville. She is the granddaughter of Glenn and Linda Anthony and Inez Bridges of Cherryville. Megan is a graduate of Cherryville High School. She received her nursing degree from Rowan Cabarrus Community College. She is currently employed as a nurse at Forsyth Medical Center in Winston-Salem.
The groom is the son of Johnny and Delores Morris of Spencer. He is the grandson of Floyd M. Burton and the late Dot Burton and the late Johnny R. Morris Sr. and Mary Lou Price. Bubba is a graduate of North Rowan High School and received a Bachelor of Science degree from Catawba College. He was a member of the Catawba baseball team all four years. Currently, he serves on the Board of Directors of the Catawba College Chief’s Club. He is employed as a teacher in the Rowan-Salisbury School System at Knollwood and Morgan Elementary Schools and he is an assistant coach for the baseball and basketball teams at North Rowan High School.
The newlyweds will make their home in Salisbury.
The day before the wedding the bride and her bridal party were honored at a bridal brunch at Emma’s of Salisbury. The bridal brunch was given by Alycen Wilson and Wanda Thompson.
On the eve of the wedding, the family of the groom, Mr. & Mrs. Johnny (Delores) Morris, Miss Drew Morris, Mr. Floyd Burton and Ms. Bo Monroe, hosted a rehearsal dinner at The Saratoga Springs in Mt. Pleasant. A country dinner was served by Debbie Suggs Catering.
Other celebratory events have been held in the months preceding the wedding. Bill, Sandra, Kiel, Marianna, Cass and Anna Jarrett honored the couple by announcing their engagement with an engagement dinner party on Sept.. 6, 2015. The “They’re Tying the Knot” party was held at the Jarrett home in Salisbury. All family members, wedding party members and many friends of the couple attended the dinner. On March 13, 2016, Drew Morris, sister of the bride, and Bo Monroe, aunt of the groom, hosted a bridal shower for family and friends at the home of Drew Morris. Friends of the bride from Cherryville hosted a bridal brunch shower on March 26, 2016 at the Carolina Care Club House in Cherryville.​

Cherese Diane Childers- McKee graduated from the University of North Carolina at Greensboro on Friday, May 6, 2016. She received... read more