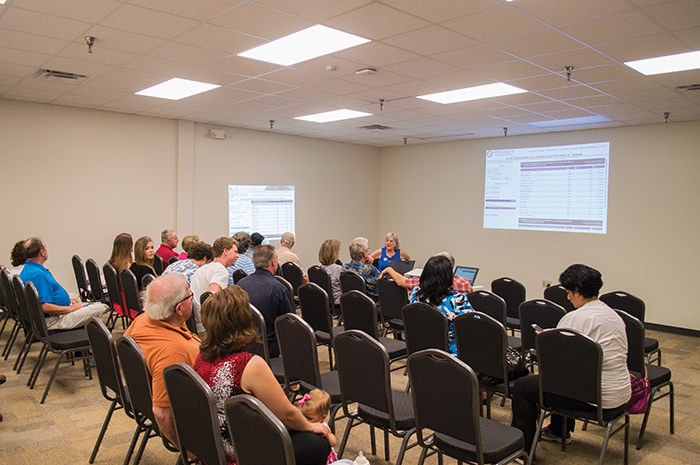 Josh Bergeron / Salisbury Post - A group of people gathered Tuesday evening at the Rowan County Board of Elections to watch election results come in live.

After his primary victory this week, 13th Congressional District candidate Ted Budd jumped a number of notches up the political prominence scale.

Apparently neither did the Internet. In addition to social media accounts, an online search for a political candidate’s name, especially someone running for Congress, usually turn up a news article or two about the person. If it’s a business owner, at least one media outlet probably has a story about a grand opening or significant event. Those who aren’t business owners may appear in news stories for participation in community activities — perhaps some sort of citizen board meeting, church activity or charity event. Successful candidates for political office occasionally are unknown by all political observers, journalists and a majority of other candidates, but it doesn’t happen often.

A Google search for Budd in any number of combinations shortly after the candidate filing period ended would have turned up a Winston-Salem magazine article from January 2015 but not much else. The article told the story of how Budd met his wife — during a mission trip to Russia — and a few other details about the couple’s marriage. The article tells of how Budd and his wife would move to Texas after marriage and enroll in seminary.

After winning a congressional primary on June 7, his days of relative anonymity are over. Every significant news organization from Charlotte to Greensboro ran a story about Budd’s victory. You’ll still find some search results online that essentially say “Who is Ted Budd?”

Brock was the first to publicly announce his intention to run. He would be joined by 16 other Republicans in the following days and weeks, but Brock remained at the top of the pack. Another frequently mentioned name was Rep. Julia Howard, R-Davie. It was also hard to rule out Guilford County candidates Rep. John Blust and County Commissioner Hank Henning. After all, their county contained the largest portion of the 13th District’s population. Surely more ballots would be cast in Guilford than any other county. If Guilford voters chose one of the two local candidates, Blust and Henning would have a reasonable shot at moving on to the general election.

Amid a way-too-crowded field of candidates and low voter turnout, candidates who were expected to do well finished at the top of the field, but Budd nearly doubled his closest competitor.

So how did Budd do it? How did he outpace a number of better known candidates with more political experience?

He did well in counties where it mattered. Rowan was the only county where Budd finished worse than third.

Plenty of ink has already been devoted to the fact that Budd received nearly $500,000 in promotion from a Washington, D.C.,-based group called the Club for Growth. The outside money in the 13th District race has been cited as a reason for Budd’s victory. Most importantly, the group ran TV commercials for Budd — something most candidates couldn’t afford.

Regardless of the cause, Budd’s first-place finisher was as close to a convincing victory as someone could have hoped for in a race with the 13th District’s characteristics.

Blust received 2,843 votes in his home county — enough to finish in the top five. Henning received about 200 fewer votes. Meanwhile, Budd received 1,685 in Guilford and more than 1,200 in every other county, excluding Rowan.

Budd won Davidson and Davie counties and placed second in Iredell, behind McCall, who scored a majority of his votes from his home county.

During last week’s election, Budd didn’t win by the largest margin of victory when compared to other congressional races. He also didn’t win by the largest number of votes. However, his margin of victory was certainly larger than what the 13th District saw on the Democratic side, where only 112 votes separated first-place finisher Bruce Davis and second-place finisher Bob Isner.

Would Budd have won in a normally scheduled election — one where all primaries occurred on the same date? Who knows. The 13th District might have seen a different field of candidates and probably more ballots cast.

There’s only one thing for sure. Whether it’s Davis or Budd, North Carolina will have at least one new member of Congress in 2017.