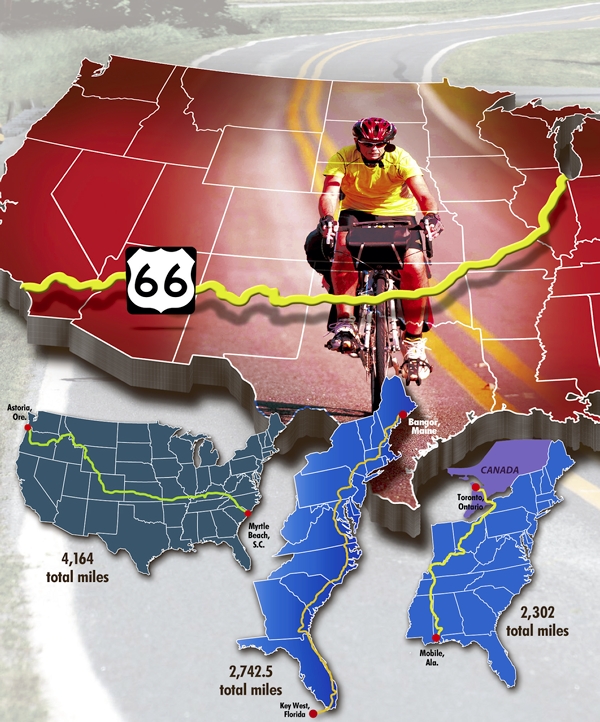 David Freeze will be “motoring” via bicycle, but he still plans to get plenty of kicks as he traces Route 66 this summer.

“I’m gonna add a couple of side trips, so it’ll be about 2,800 miles for the whole ride,” says Freeze, a local running coach, author and speaker.

One of those aforementioned side trips will be to the Grand Canyon, about 80 miles off the route, one-way.

“If I go there, I’m looking at two or three days to do that,” Freeze says. It’s a safe bet he’ll go, since that would be his first trip to the Grand Canyon. He’s only previously seen it from the air.

Freeze started these summer odysseys in 2013, with a 4,164-mile trip from the West Coast to the East Coast. He’s followed that inaugural quest with a 2,700-mile ride from Maine to Key West in 2014 — the northernmost point in the U.S. to the southernmost point —and followed the Underground Railroad last summer from Mobile, Ala., to Toronto, a 2,600-mile trek.

Why keep going out every summer?

“I love the adventure,” Freeze admits. “Every morning, it’s hard not to be excited about riding. Every evening, I plan what I’m gonna do the next day. Even if I’m really tired, I wake up in the morning ready to go.”

Post Editor Elizabeth Cook has suggested on past rides that he take a rest day from time to time.

“I will if I need one,” Freeze says, “but I never have yet. It’s too much fun to see what’s gonna happen the next day.”

Freeze will once again travel on his trusty Surly long-haul bike. It’s his second bike — his first was totaled in an accident in Florida during the 2014 trip.

“Those bikes are made for thousands of miles,” Freeze notes.

The bike is already on its way to California, due to arrive at Cynergy Cycles, about 20 blocks from the Santa Monica pier, the official start of Route 66.

Through his research, Freeze has learned that Route 66 is one of the country’s most historic roads, one of the original highways in the U.S. highway system. There are quirky, iconic points along the way: the Wigwam Motels, the Cadillac Ranch (a long line of Caddys buried nose down in the sand), an 80-foot blue whale in Oklahoma — you get the picture.

Since the road has officially been removed from the highway system, there aren’t too many big cities along the way, save for L.A. and Chicago.

Because of all the attractions, Freeze has purposefully not chosen an end date to his trip.

“I have an extra week before I have to be back,” he says. “Whatever happens, I’ll decide on a daily basis. There’s a lot of things to see.”

He’ll continue to work with Michelle Patterson and Jennifer Payne — he’s been coaching the two women since January — via email.

“I’m very confident they’ll stick with it,” he says of the duo’s fitness plan. “They motivate each other and they’re upbeat. I’m not worried about them at all.”

Look for Freeze’s daily dispatches in the Post starting around mid-June.

Freeze says the most challenging part of the trip will take place in California, where he’ll be traveling through the desert and where daily temperatures are now 117.

The worst climbing, he adds, is within the first 500 miles or so. “It’s fairly reasonable the rest of the way. Not like crossing the Rockies.”

On the plus side, he won’t have to carry any cold-weather clothes — but he will need to carry a lot of water.

“I’m traveling lighter this time than I ever have, because I have to carry so much water,” says Freeze, even though that water will get hot along the way. “But drinking hot water is better than drinking no water.”