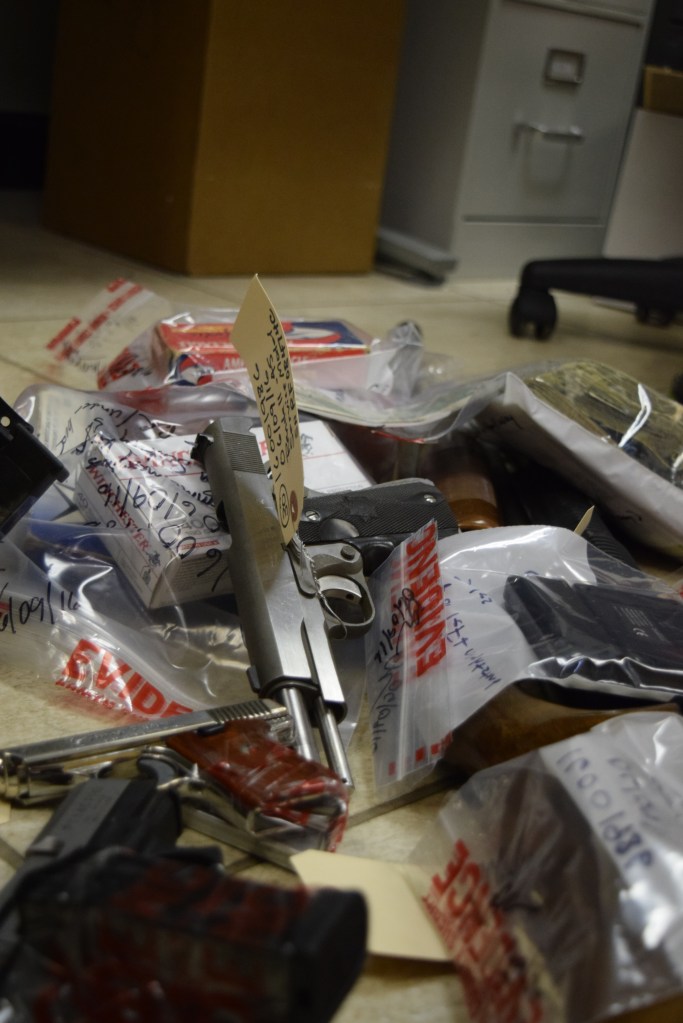 Deputies seized 47 grams of heroin, three shotguns and four handguns, more than $2,000 in cash, assorted ammunition, marijuana, 37 valium tablets, one gram of methamphetamine ice and a smoking bowl from a home near Rockwell in June 2016. The home is just around the corner from Nazareth Children's Home and the Saleeby-Fisher YMCA. Rebecca Rider/Salisbury Post

ROCKWELL — For the past three years, residents have been filing complaints against 375 Nazareth Home Road, Rockwell. Chief D. Ramsey, commander of the Rowan County Sheriff’s Office criminal investigations division, said the house, located just around the corner from Nazareth Children’s Home and the Saleeby-Fisher YMCA, was known as the place to go for heroin.

“It got so bad that neighbors were posting his name and phone number saying, ‘If you want to buy heroin, call this telephone number,'” he said.

The house was also the site of numerous overdoses, including one overdose death in June 2015. In March 2013, there was a drug overdose at the house, and the person survived. According to a press release from the Sheriff’s Office there were other overdoses that were not reported.

The Sheriff’s Office began investigating the residence after the June 2015 death, and Ramsey said undercover operatives made several controlled buys of heroin and methamphetamine from the owner, Grady Edward “Eddie” Austin, 57.

According to the Sheriff’s Office, Austin is one of the county’s biggest heroin suppliers, and Ramsey described him as a “public nuisance” and a local “big player” in heroin distribution.

In May, Ramsey said Austin went to metro-area Charlotte to pick up a large quantity of heroin. On Thursday, the Sheriff’s Office executed a search warrant after they saw Austin and another individual enter the home. Deputies found Austin in a back, locked bedroom, and Ramsey said there were several other individuals inside the home.

“I actually found one individual with a needle in his arm,” he said.

Deputies seized three shotguns and four handguns found in a closet and a locked safe. More than $2,000 in cash, assorted ammunition, marijuana and 37 Valium tablets were seized from the residence, along with one gram of meth ice, a smoking bowl and marijuana found in a pocketbook belonging to one of the occupants.

The release said Austin had 47 grams of heroin in his pockets at the time of arrest. Ramsey said both Mexican brown and black tar heroin were taken from the home. Used and unused needles were found throughout the bedroom.

The house is owned by a Florida resident who will receive notice from the Sheriff’s Office about the residence being a public nuisance and the potential consequences, including seizure, if the situation persists.

Austin has been arrested and charged with trafficking heroin or opium and maintaining a dwelling or a vehicle for a controlled substance. He has been placed in the Rowan County Detention Center under a $2 million bond and faces a potential sentence of 225-282 months (more than 18 years to 23 and a half years) and a fine of $500,000. Austin was consolidated for judgement in 1986 for assault on a female and assault with a deadly weapon, but since then has only faced charges for driving while impaired, driving while license revoked and writing worthless checks.

“I think maybe we’ve addressed it this time in a solid way,” Ramsey said.