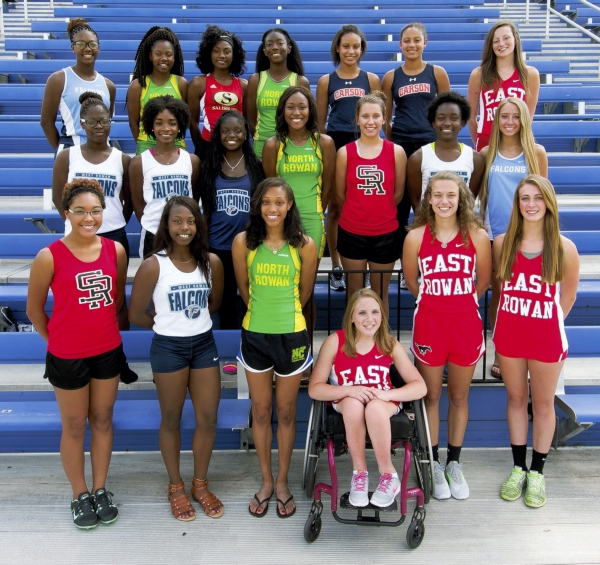 SALISBURY — North Rowan’s Payton Russell is not one to rest on her laurels.

With still a high school senior year to go, Russell, already a two-time Rowan County Girls Track Athlete of the Year, is coming off a three-event state championship effort a few weeks ago in Greensboro.

Russell runs for the AAU Salisbury Speedsters and coach Tim Dunlap, her coach since she was 9 years old. Russell runs in the Speedsters’ summer program, including the New Balance nationals, coming up June 17-19, at N.C. A&T State University.

The A&T track is familiar and comfortable for Russell, as that is exactly where she and her North teammates competed in the state 2A meet a few weeks ago.

“I didn’t really make my expectations for the 400, but I was pretty excited about my 200,” said Russell, thinking back to the state meet. I’m so used to running on A&T’s track. I’ve been running on that track in events since I was 8.”

Last year as a sophomore, Russell also won the state championship in the 400 but placed second in the 200.  She was fifth in the 100 meter dash both years, but Russell confirms that that event is not her specialty.

“I struggle coming out of the blocks, so with the longer distances, I’m able to make it up, as the distance gets longer,” said Russell. “My 200 is better than my 100 and my 400 is my best event.

“I have a late reaction to the gun, so while everyone else is like two or three steps out, I’m just then coming out of the blocks,” explained Russell. “That hurts me on the 100, since it’s such a quick race.”

It may take her a split-second to get going but once she does, Russell is “just plain fast,” as NASCAR legend Richard Petty said once. Her time in the 100 of of just under 12 1/2 seconds was good enough for fifth in the state. The winner, Tajah Walston of Cummings, ran an 11.94.

In Russell’s best event, the 400, she sprinted about the track in a winning time of 56.44 seconds, over a full second ahead of Northside’s Kieora Nichols (58.02).

Still, Russell wasn’t that happy with her time.

In the 4×400 relay, North won with a time of 4:07.76, a full second ahead of Lake Norman Charter School (4:08.76). Russell ran the first leg and secured the lead and Brianna White, Tabitha Tulloch and Rochelle Bowman finished the job — just like North Rowan coach Philip Bush drew it up.

Russell’s parents, Thomas and Alisa, were athletes at rival high schools in Pennsylvania. There, Thomas played football and basketball before a knee injury ended his career.

Alisa was a track and basketball star in high school and then played basketball in college at Edinboro University.

Payton’s great-grandmother, the late Frances Anderson, lived in Salisbury and her parents decided to move south after their visits here.

“My parents, if it wasn’t for them, I probably wouldn’t be doing this because I’ve wanted to quit so many times,” Russell admitted. “But they always gave me that little push and I’m thankful for it now. They taught me how to be more self-motivated and now track is something that I really want to do.”

“He actually ran with Rowan Express and so that’s how my mom knew about AAU,” said Payton. “I would go to his track meets and stuff like that. Then I tried it and I was fast.”

Russell now has summer running to do and next year’s high school competitions. With her talent, colleges are already checking in.

“I would like to run track in college, but I know that I want to stay close to home — North or South Carolina,” Russell said, adding that she has had NCAA Division I interest from schools in Kansas, Florida and Tennessee.

And she is a good student so academic scholarships may be there as well.

“My high school experience has been great thus far and it has given me motivation like, ‘wow, I am pretty good,'” Payton said. “I’ve always had the confidence that I was pretty good, but not that good. I need to work hard to get even better.”